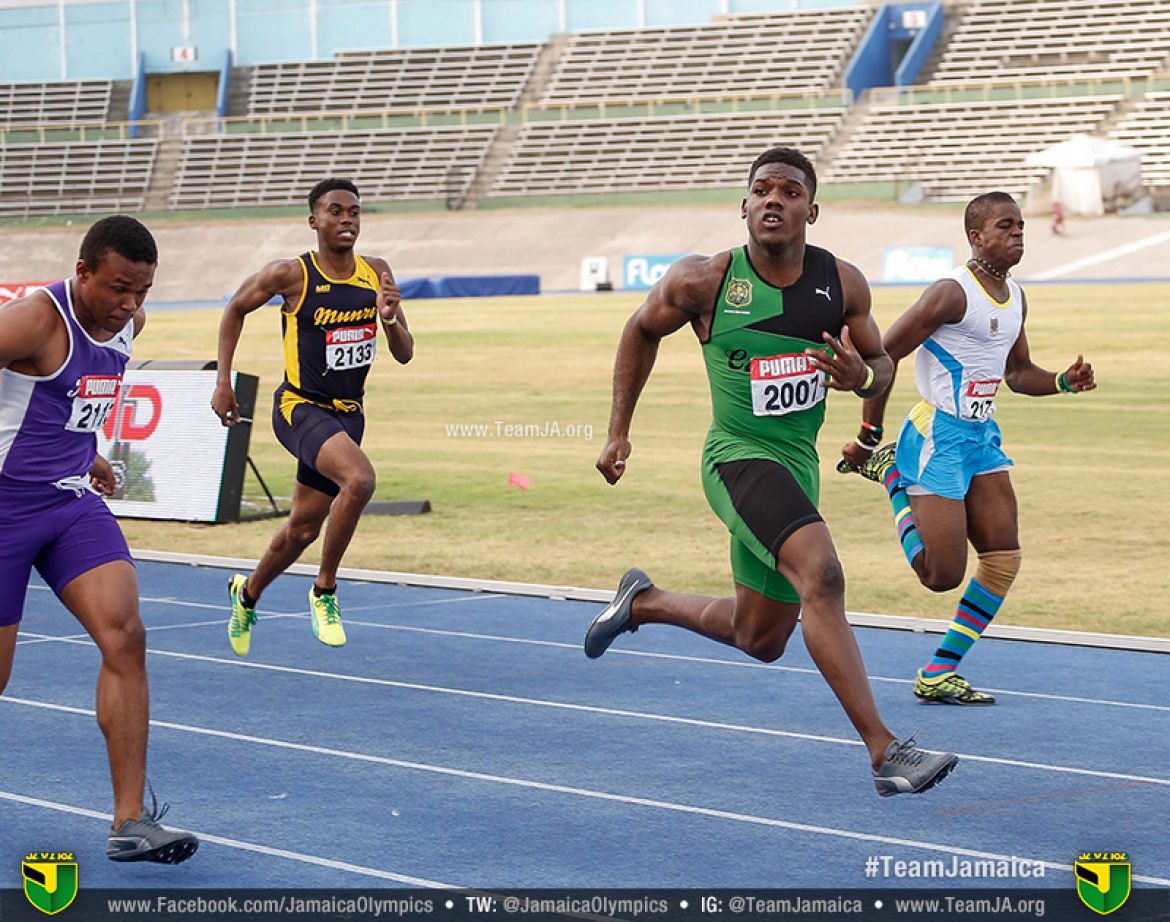 There were few highlights on Day One of the Jamaica National Junior Track and Field Trials at the National Stadium with several of the country’s leading age group athletes missing in action. There was little for the scatter of spectators to cheer for with predominantly small fields and a handful of noteworthy performances.

On a day when world youth leader over 100m Candace Hill of the USA clocked a mind boggling world youth best 10.98 (2.0 m/s) to send out a strong warning to rivals ahead of the 2015 IAAF World Youth Championships, one of Jamaica’s best prospects over the distance, Kimone Shaw did what she had to do, brushing aside rivals to win the U18 Girls 100m in 11.81. Vanesha Pusey of Green Island (11.97) pipped the highly thought of Shellece Clarke (11.99) for second. Clarke of Edwin Allen High is the only Jamaican ranked in the 2015 top 10 coming in at number 7.

The U18 Boys 100m was won by pre-race favourite Xavier Angus of Calabar High in 10.79. Andre Morrison of St. Jago High (10.88) and Ashanie Smith of St. Catherine High (10.95) rounded out the top 3. There is no Jamaican ranked among the top 10 youth over the distance. The world youth leading time of 10.31 is held by Abdul Hakim Sani Brown of Japan.

The Girls U20 title came down to a straight fight between the Holmwood Technical High pair of Sashalee Forbes and Ashley Williams with Forbes pulling away to win in 11.71 ahead of Williams 11.86. Kimone Hines of Green Island High was 3rd in 12.06. The Boys equivalent was won in impressive fashion by Xandre Blake of Calabar in a personal best 10.46. Shivnarine Smalling of Kingston College (10.59) and Hujaye Cornwall of STETHS (10.67) occupied the other podium spots.

Blake who has had an injury plagued season was elated at his performance. “I expected to win and did what I was supposed to…..come Pan Am Juniors Jamaica should expect great things from me” said a confident Blake in a brief post race interview with Team Jamaica Sports.

The 400m hurdles races were for the most part poorly supported with two athletes in each of the girls’ section and three in the U20 boys segment. The U18 Girls 400m hurdles was a blowout for STETH’s Junelle Bromfield (59.94) ahead of Shian Salmon of Hydel High (63.15).

The versatile Bromfield is one of Jamaica’s leading medal prospects for the Cali 2015 World Youth Championships and is currently ranked at number two with a best of 58.07 behind Sydney McLaughlin of the USA with 57.39. Shannon Kalawan of Edwin Allen High (61.57) romped home to win the U20 section with Jonel Lacey of Holmwood Technical High (63.34) a distant second.


[/column2_last]
Leonardo Ledgister of STETHS showed that with a little more time he could develop into a more than useful 400m hurdler. Ledgister never looked in danger of defeat as he won the U18 section in a respectable 52.37 ahead of team-mate Jauvaney James who looked woefully out of sorts in executing his race but still managed to grab second in 52.98.

Ledgister’s time vaults him into the top 10 on the 2015 list at number 8 while James’ season best 52.77 earlier in the year sees him holding down the number 10 spot. STETHS made it a sweep of the Boys 400m hurdles as 2013 World Youth Champion made light work of his two competitors to win the U20 section in 51.80.

The U18 Boys High Jump went to 2014 Youth Olympic Games representative Lushane Wilson of St. Jago High with a best clearance of 2.06M. Wilson has the 4th best jump on the 2015 Youth list with 2.15M behind world leader Steffan Sottile of Italy (2.20M) and could be in medal competition at the World Youth Championship.