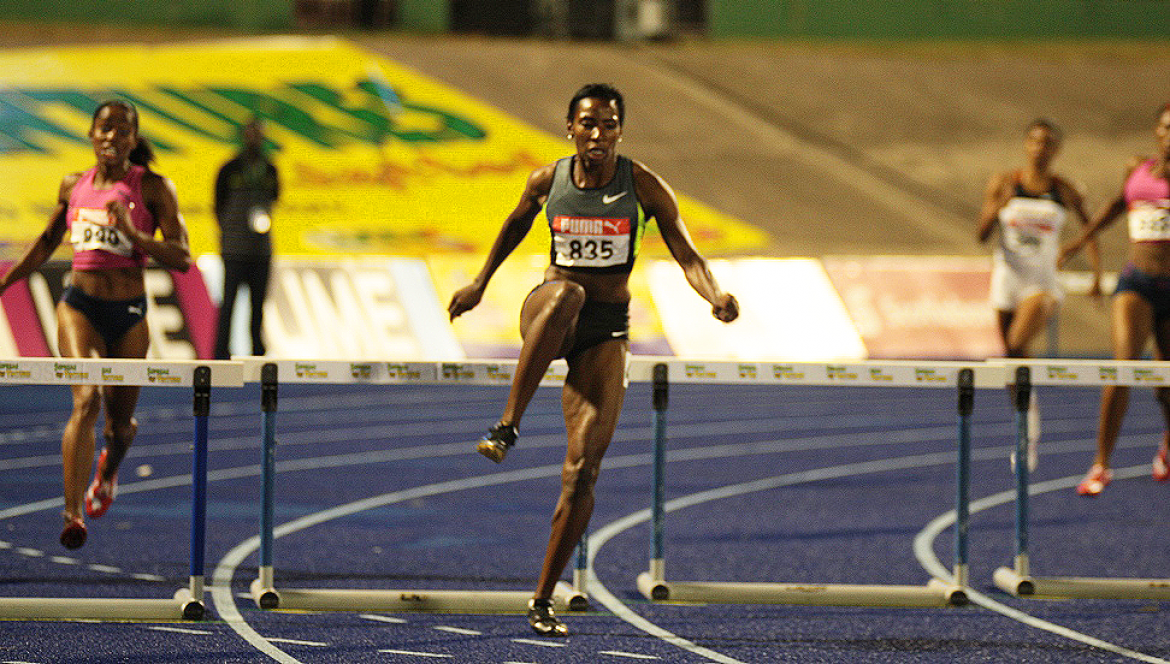 The women’s 100m Hurdles may lack the ‘star’ power of the marquee events at the 2015 JAAA/Supreme Ventures National Track and Field Championship but it could provide an interesting finish and some of the best story lines of ‘Trials’.

The likes of Daeshon Gordon and Samantha Elliott will be looking to put some pressure on the main protagonists, but it was the appearance of the name Melaine Walker on the Entries List early in the week that got tongues wagging. So frenzied was the reaction that mainstream and social media reports incorrectly had her down to compete in both the 100m and 100m hurdles.

The much anticipated return of the former Olympic and IAAF World Champion over the 400m hurdles has been the subject of much chatter among track and field fans. Many still question her decision to abandon the 400m hurdles in favour of the sprint hurdles, a change that led to a less than amicable split with long-time coach Stephen ‘Franno’ Francis and ultimately what amounted to a self imposed exile from the national scene. Some are of the view that she has ‘lost it’ and will fail miserably, perhaps not even progress to the finals.

Her die-hard supporters and the majority of track and field fans are hoping that her warrior-like fighting spirit will propel her into the mix and possibly a return trip to Beijing, arguably the scene of her greatest triumph. Walker is no stranger to the event and has a personal best of 12.75 but that was set almost a decade ago.


[/column2_last]
She has raced sparingly since the fallout with Franno and is not even on the radar in terms of competitive times over the sprint hurdles. It will take a herculean effort and probably the upset of the ‘Trials’ if the 32 year old Walker were to finish in the top three much less win the event. Her season best time is 13.36 (+1.5 m/s) which makes her the 16th best Jamaican on the year.

Danielle and Shermaine Williams are hoping for Sister Act 2 in the National Senior team at the IAAF World Championships in Beijing after both made the team to the 2013 Moscow Games.

Danielle Williams was the National Senior Champion in 2013 but was dethroned in 2014 by Monique Morgan. ‘Ants’ as she is affectionately called is determined to win her second senior title and is favoured by many to do so. She is the fastest Jamaican in 2015 with a time of 12.77 (2.00 m/s) which ranks her at number 15 on the world list. Interesting that list is dominated by the all conquering Americans with no fewer than 11 of their sprint hurdlers in the top 15.

Only four Americans (including the defending champion) can compete in Beijing and former champion Sally Pearson will not be be there after suffering a bad injury during a fall a few weeks ago. This increases the younger Williams’ chances of at least making the finals in Beijing as she is now the de facto number seven ranked sprint hurdler of those likely to be at the Bird’s Nest. The 4th place finisher at the 2014 Commonwealth Games is the one to beat at ‘Trials’ but will have to put every foot right if she is to regain the National title.

Shermaine Williams has had a stop-start campaign in the senior ranks owing to injuries or a lack of form. She represented Jamaica at the London Olympics in 2012 and the 2013 Moscow World Championships where she narrowly missed qualifying for the finals. In 2014 she finished a disappointing 4th at ‘Trials’ and as a result missed the Commonwealth Games. She is the 3rd fastest Jamaican in 2015 with a best of 12.87 (2.00 m/s) and will be looking to shrug off her poor effort of last year with a podium finish at ‘Trials’ thereby booking her place on the team to Beijing.

Defending champion Monique Morgan is finding form at the right time and will not be giving up her title, at least not without a serious fight. She clocked a season and personal best 12.84 (1.8 m/s) in May but may have to lower that time significantly if she is to repeat as National Champion.

The diminutive Megan Simmonds is another senior team hopeful in the quest for one of the three spots up for grabs for the 2015 IAAF World Championship. The 21 year old UTech student is coached by Brigitte Foster-Hylton, the first Jamaican to win the event at the global level having done so at the 2009 Berlin Games.

The former St. Andrew High School standout is a tough competitor but may find a podium finish a tall order. Her personal and season best 12.91 (2.0m/s) makes her the 4th fastest Jamaican in 2015. She should comfortably make the finals at ‘Trials’ after which the hurdles in front of her just might appear higher.

Others expected to challenge for a place in the finals are Kimberly Laing, the 5th ranked Jamaican in 2015 with a personal best 12.95; 18 year old Daeshon Gordon who continues to show improvement with every run and is the 6th ranked Jamaican with a time of 13.10; former Immaculate Conception High track star Samantha Elliot who is ranked 7th having recorded 13.11 and former National Champion Indira Spence who rounds out the top eight Jamaican hurdlers on the world list with 13.15.

The 100M hurdles could produce one of the closest finishes at ‘Trials’.