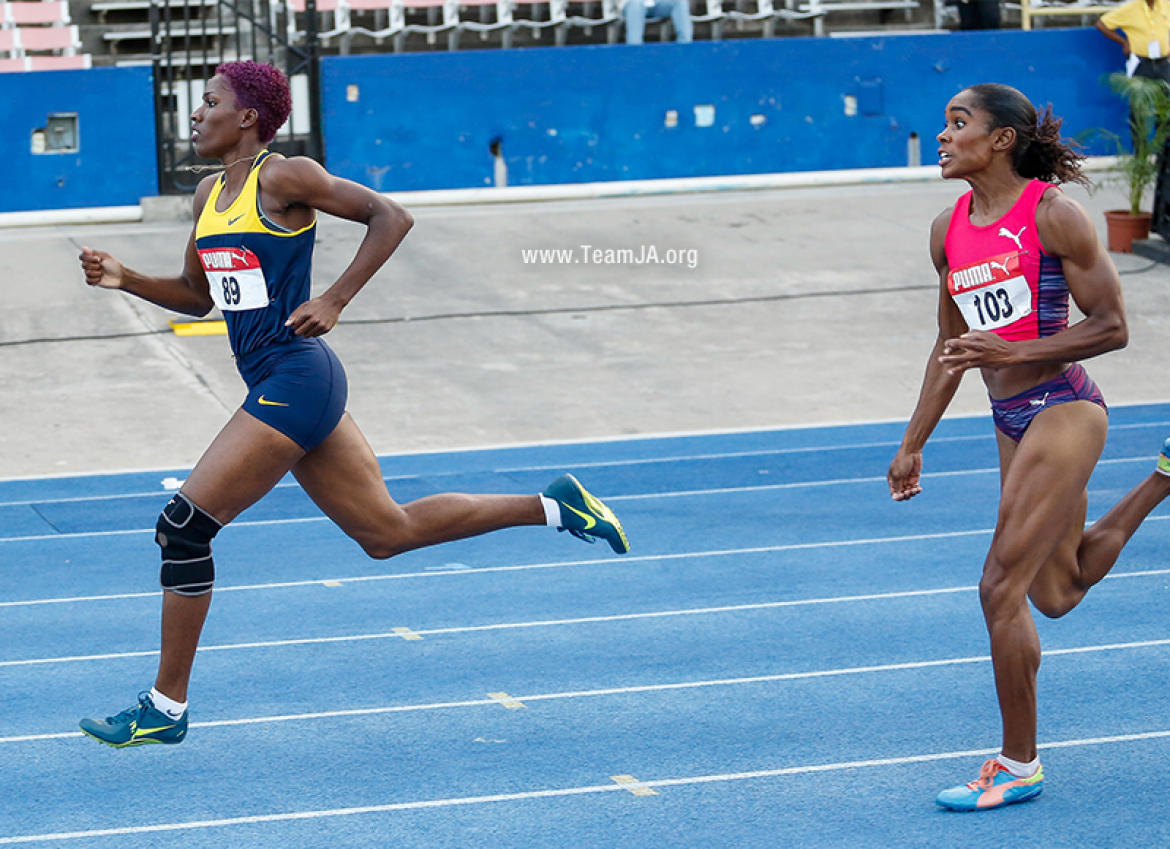 The 2014 Diamond League 400m hurdles race series winner Kaliese Spencer has a wild card to the Beijing World Championships which means Jamaica will be sending four representatives to the track and field showpiece in August. Spencer will be in action at the 2015 JAAA/Supreme Ventures National Senior Track and Field Championships (“Trials”) and will be tough to beat in pursuit of yet another National Senior title and a 4th consecutive trip to the IAAF World Championships. The MVP starlet is by far the fastest Jamaican this year with a season best 54.15 which ranks her 3rd in the world.

Janieve Russell is the only other Jamaican to go sub 56 so far this year and her season best 54.83 puts her in prime position to grab one of the three remaining tickets to Russell. The UTech athlete’s next best time of 55.29 done at the Jamaica International Invitational IAAF World Challenge Meet in May is almost a full second faster than the next best Jamaican on the year. The 21 year old ‘Jellyfish’ as she is affectionately called, has looked much improved and appears on course to surpass her 54.75 personal best set at the 2014 Jamaica National Senior ‘Trials’.

Danielle Dowie has been disappointing since what many thought would have been her breakthrough year in 2013 when she set a personal best 54.94 on her way to making the World Championship team to the Moscow Games. The 23 year old appears to be rounding into form and could well force her way into the mix with a big run. She is the 3rd ranked Jamaican this year with a season best 56.26. A reproduction of her 2013 ‘Trials’ run may just be enough to see her placing her name on one of the three available tickets to Beijing.

Another athlete who has failed to live up to huge expectations is Ristanana Tracey who at one stage appeared to be the ‘heir apparent’ to Kaliese Spencer and former Jamaica number one Melaine Walker. Rista, as she is called by many, is the younger of the Tracey sisters and will be looking to secure a 3rd consecutive berth to the IAAF World Championship after semi-final showings at the event in 2011 and 2013. The 23 year old Racers Track Club athlete has a personal best of 54.52 but has not broken 55 seconds in near two years.

Tracey has looked woefully out of form this season with a best of 57.14 and is the 7th fastest Jamaican on the season. On current form, the once highly thought of Tracey will be hard-pressed to make the team but the 400m hurdles has been known to throw up a few surprises so she may be waiting on the right moment to punch her name on one of the tickets to Beijing.

The older Tracey sister, Nikita, had one of her best years in 2014 finishing in the top three at the National Senior ‘Trials’ and representing Team Jamaica at the 2014 Commonwealth Games. She has failed to take it to the next level since and will find it difficult to force her way on the team with a top four finish. She is the 11th ranked Jamaican in 2015 with a time of 57.63.


[/column2_last]
Shevon Stoddart is a veteran campaigner who still has a few shots to fire. The 32 year old part-time model/singer is the 4th ranked Jamaican on the year with a best of 56.27. She is a two time Olympian having represented Jamaica at the 2004 and 2008 Games. She also made the team to the 2005 IAAF World Championships. She has a glorious chance of not just a return to a 2nd World Championships but also a return to the Bird’s Nest Stadium in Beijing.

Nickiesha Wilson is another veteran entertaining hopes of making another IAAF World Championship team. Wilson who is the 2nd fastest of the athletes entered with a personal best of 53.97 is somewhat of a ‘Trials’ bully and has qualified for every major global meet since 2007, a span which includes 4 World Championships and 2 Olympics. Her ‘Trials’ pedigree is well known and she could once again time her race to perfection to secure one of the available spots.

The ‘dark horse’ of the field could well be GC Foster’s Rhonda Whyte who is improving at the right time and is the 6th ranked Jamaican with a personal best 56.72. Samantha Elliot who is expected to also contest the 100m hurdles is the 5th fastest Jamaican on the season with 56.46 and should make the finals while the powerful Rushell Clayton will also be looking to make her mark.