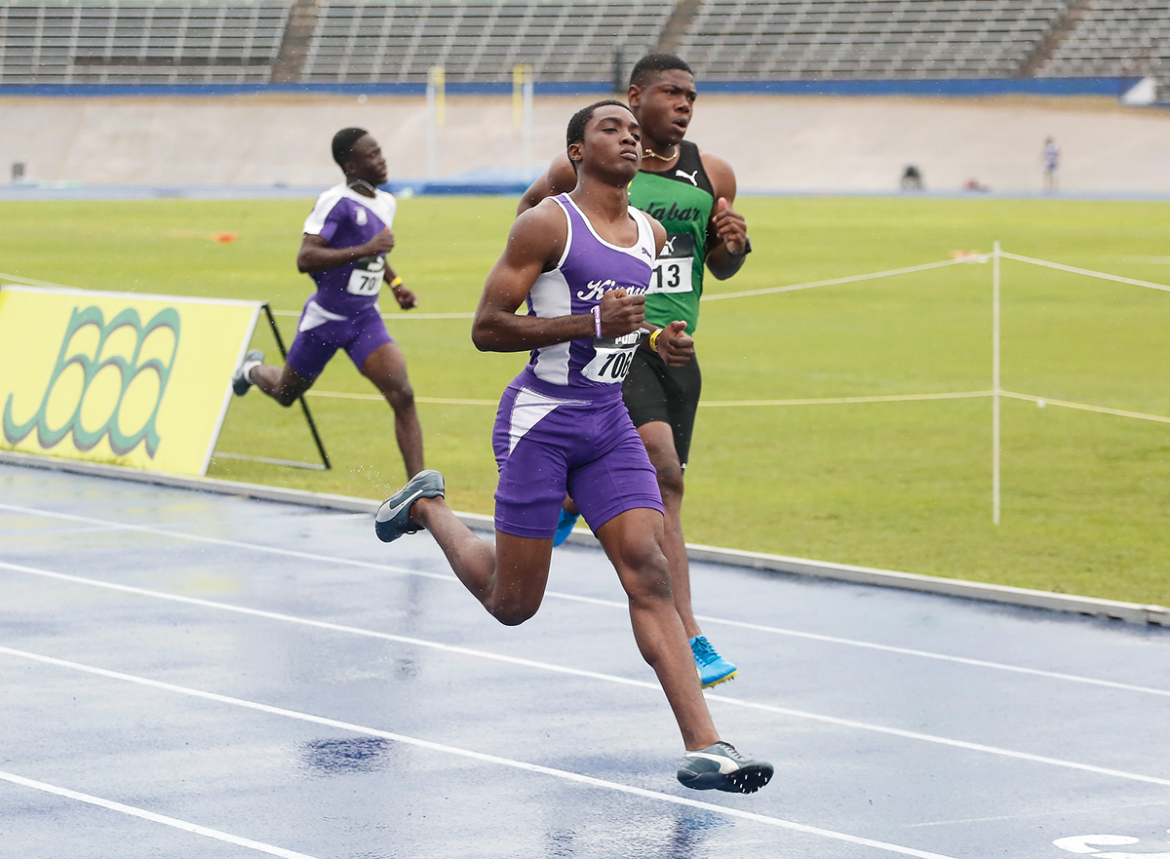 They ran in separate finals but each in his own way sent a message to the other and to all their rivals ahead of ‘Champs’ 2016, when they are expected to face off in a blockbuster clash. Jhevaughn Matherson of Kingston College and Nigel Ellis of St. Elizabeth Technical High School (STETHS) sent tongues wagging on Day 1 of the 2016 CARIFTA Trials with impressive wins in the finals of the 100m for U18 and U20 boys.

Matherson whose 2015 season was derailed by injury, showed in no uncertain manner that he was back to his best, stopping the clock at 10.25 (0.9 m/s) to win the U18 finals ahead of the powerfully built Dejour Russell of Calabar who ran a personal best 10.39. Matherson a.k.a. ‘Mr.Smooth’ who stumbled badly in his heat earlier in the day, looked to be in imperious form, breaking the National Youth Record (U18) held jointly by Jhazeel Murphy and Raheem Chambers. The 17 year old whose previous best was 10.37 will now turn his attention to the ISSA/Grace Kennedy Boys and Girls Championships (‘Champs’) from March 15-19 and the much anticipated showdown with Nigel Ellis.

Ellis was no less impressive in dispatching a strong field including ‘Champs’ Class Two record-holder Raheem Chambers of St. Jago High School and the inform Calabar High School sprinter, Xavier Angus. The fast starting Chambers who was running his first individual 100m of the season showed very little rust and looked to be holding Ellis at bay before the STETHS star gained the upper-hand to inch away for a comfortable win in 10.26 into a slight headwind. Chambers who lost no marks in defeat was second in 10.32 and showed that he will be a force to be reckoned with come ‘Champs’. Angus (10.51) narrowly secured third place over Javoy Tucker of Wolmer’s Boys’ School.

Kimone Shaw of St. Jago High was never seriously challenged, romping home an easy winner of the U18 Girls 100m in 11.51(2.2 m/s). The U20 Girls 100m final resulted in a facile win for the much improved Patrice Moody of Edwin Allen High School. Moody won in a personal best 11.56 ahead of Shanice Reid of St. Jago High (11.71) and Rochelle Burton of Camperdown High School (11.80).

Shannon Kalawan of Edwin Allen High was in a class of her own, demolishing the field on her way to securing the U20 Girls 400m Hurdles in an eye catching 56.80 with Nicolee Foster a distant second in 58.40. The U18 equivalent went to Sanique Walker of Vere Technical High in 58.64 over Shian Salmon of Hydel High. Jauvaney James (51.67) came with a well-timed run to pip Timor Barrett of St. Jago High (51.68) to win the U20 Boys 400m Hurdles while Leonardo Ledgister (53.26) won the U18 division to make it a clean sweep for STETHS.

Other winners on the day included Cemore Donald in the U18 Girls 800m, Junelle Bromfield in the U20 equivalent, Bellefield High’s Shavon Parkes in the U 20 Boys two lap event, Garfield Gordon of Mavis Bank High (5000m), Monifa Green of Hydel (3000m) and in perhaps the upset of the day, Calabar’s Javantaye Williams who came with a storming run to beat big favourite Keenan Lawrence of St. Jago in the U18 Boys 800m.

National Junior record-holder over 400m and the defending CARIFTA U20 400m Champion Akeem Bloomfield made his long-awaited seasonal debut in the event and allayed the fears concerning his well-being with a stroll in the park to win his heat in 47.44. The lanky athlete from Kingston College covered the field quickly before cruising home on a common canter to book his place in the finals of the U20 Boys 400m scheduled for Day 2. All eyes will be on the clock.