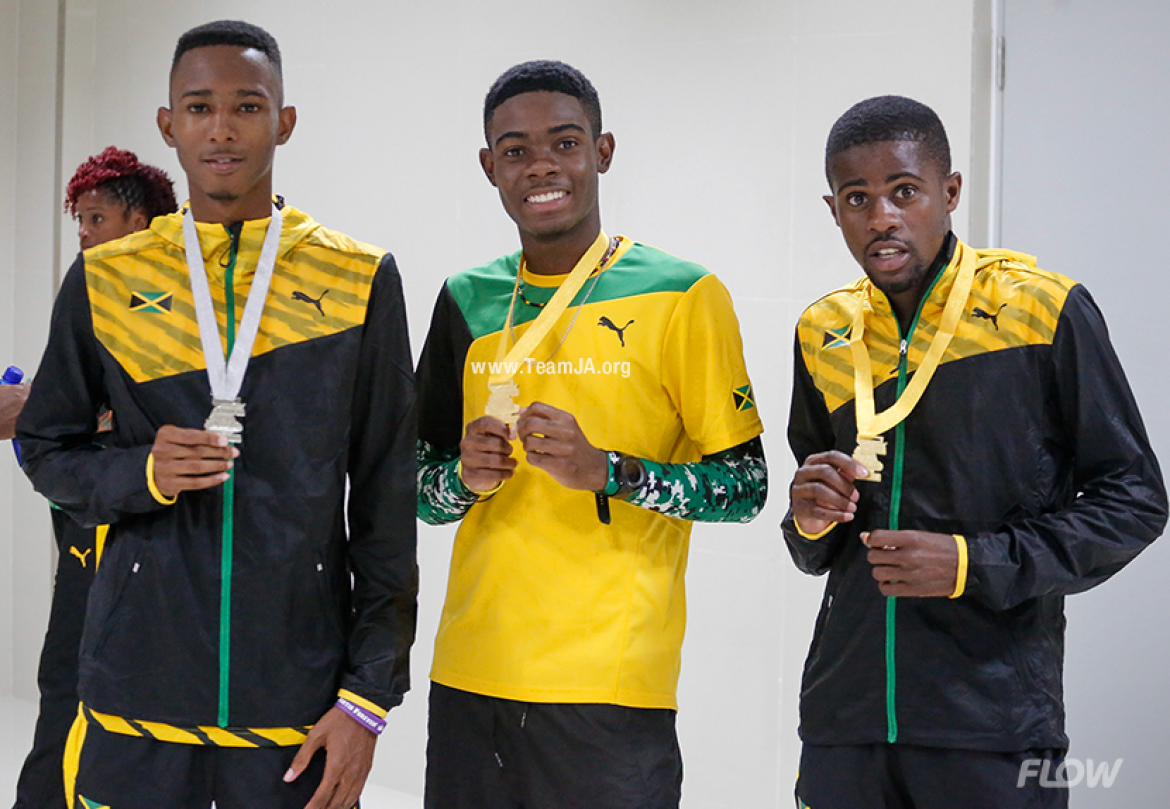 Regional powerhouse Jamaica unleashed much of it’s heavy artillery on Day One of the 45th CARIFTA Games in St. Georges, Grenada. The Jamaican youngsters showed little or no ill effects of the recent ‘Champs’campaign, turning in one dominant performance after the other. At the end of the opening day, Jamaica had amassed some 26 medals including 11 Gold, 10 Silver and 5 Bronze.

In 2015 Jamaica failed to win either Boys 100m title and it was clear from the heats that there would be no repeat of that anomaly. In the U18 division, Jhevaughn Matherson and Dejour Russell went in as favourites for the top two positions and duly obliged albeit in contrasting styles. The smooth Matherson was not the best away but recovered to blast away the field in 10.42 seconds. Russell got perhaps the worst start of his season and looked well out of contention for a medal before powering through in the last 20m to secure the Silver in 10.60.

BOOM! Another quinella for Team Jamaica in U-18 Boys 100M FINAL! Jhevaughn Matherson GOLD in 10.42 and Dejour Russell SILVER in 10.60. #Carifta2016 #TeamJamaica #Jaminate

The U20 Boys 100m promised to be a cracker and did not disappoint. The exciting Nigel Ellis showed in the heats that he would be the one to beat and despite a less than brilliant start, demonstrated his now customary mid race acceleration to move away for a comfortable win in a fast 10.16. Ellis in the process lowered his personal best and world junior leading time of 10.18 set at ‘Champs’. Defending champion Mario Burke of Barbados got off to a flyer but was unable to repel the challenge of Ellis. He held on for the Silver in 10.29 ahead of another Jamaican, Raheem Chambers (10.35).

Kimone Shaw has been unstoppable this season and took her show to the CARIFTA Games where she easily disposed of rivals to win Gold in the U18 100m in 11.56. Her teammate Mischae Harriot (11.90) was involved in a photo finish for the bronze but narrowly missed out after the results were taken to the thousandth of a second.

In the Girls U20 equivalent, the 2015 World Youth Silver medalist over 100m, Khalifa St. Forte of Trinidad and Tobago ensured that Jamaica would not sweep the short sprint as she pulled away from rivals for a facile victory in 11.40 (-2.7 m/s). Jamaica’s Patrice Moody ran very well to secure the Silver in 11.68. The other Jamaican entrant, Shanice Reid was 5th.

National Junior Record holder Akeem Bloomfield ran conservatively for much of his race but was never really tested as he retained his U20 400m title in 46.01, his fastest time of the season. Jamal Walton of the Cayman Islands ran a brave race to claim Silver in 46.23. Teammate Sean Bailey who was in a position to challenge for a medal appeared to suffer an injury in the last 50m and finished in last position.

World Youth Champion Christopher Taylor made it back to back titles in the U18 400m. Taylor toyed with rivals before jogging away to win in 47.29. Stacey-Ann Williams (54.00) took the Girls U18 title holding off the persistent challenge of hometown girl Amanda Crawford (54.16).

Tiffany James could not improve on her Bronze medal effort from 2015 when she contested the U20 400m. James (52.70) was no match for the high flying Sada Williams of Barbados who took the event in 52.07 ahead of defending champion Shaquania Dorsett of Bahamas (52.50). Jamaica’s other entrant, Semoy Hemmings finished 4th.

Jamaica narrowly missed sweeping the 1500m, taking three of the four races. Cemore Donald who has not lost all season kept her unbeaten record intact, winning the U18 girls race in 4.42.61 ahead of teammate Britnie Dixon 4.43.53. It was another 1-2 for Jamaica in the U20 boys with Shevon Parkes dismantling the field from early to win in 3.56.73 with compatriot Kristoff Darby taking the Silver in 4.03.76.

Jamaica’s lone entrant in the U20 girls equivalent, Asshani Robb ran a well timed race to secure the win in 4.39.20. The impressive Jonathan Jones of Barbados lived up to his favourite billing and in the process stopped Jamaica from securing all four titles over the distance. Jones won in a record 3.57.19 to smash the record that was held by Theon Oconnor of Jamaica (4.00.04). Keenan Lawrence tried to mount a challenge but made little inroads, finishing second in 3.59.64. The other Jamaican, Javon Taye Williams finished down the field.

Jamaica also showed its strength in the field events on Day 1. Shiann Salmon was in brilliant form, twice recording personal bests on her way to securing Gold in the U18 High Jump with a winning effort of 1.82M. Salmon’s teammate Lamara Distin took the Silver with a personal best 1.77m. Kevin Nedrick was 2nd in the U20 Discus with a best mark of 53.53M behind Josh Boateng (57.19M) of hosts Grenada.

Jessica Noble was 2nd in the U20 Long Jump with 6.20m while compatriot Tissana Hickling claimed Bronze with a best effort of 5.84m behind the winner and new record holder Yanis Davids of Guadeloupe (6.48m). Our other medals on the day came in the Boys U20 High Jump where Lushane Wilson had a best clearance of 2.08m to take the Silver over teammate Romario Douglas who was third with 2.05m.