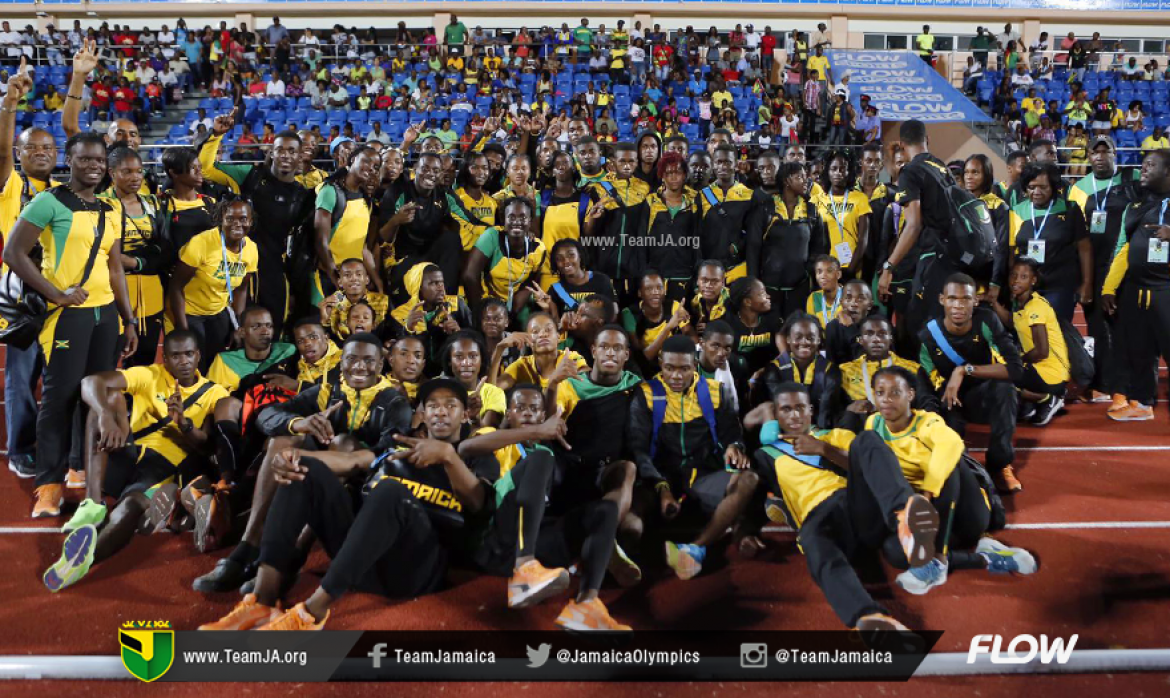 It was the anticipated avalanche of medals on the closing day of the 45th CARIFTA Games in St. Georges, Grenada as Team Jamaica’s quest to surpass its 2015 haul went into overdrive. The final medal count showed that Jamaica garnered 86 medals, one more than the 85 the team secured in 2015. The medal chest contained 42 Gold, 28 Silver and 16 Bronze.

In the U20 Girls 100m hurdles, the rejuvenated Rushelle Burton continued her great form this season to score a facile win in 13.35 (2.8 m/s). Burton had anchored the sprint relay team to Gold on Day 2. Sidney Marshall made it another 1-2 finish closing well to get the nod over Jeminise Parris of Trinidad and Tobago. Both athletes were timed in 13.73 with Marshall prevailing by one thousandth of a second.

Jamaica experienced mixed fortunes in the boys sprint hurdles. The team was denied an opportunity for a 1-2 finish in the U18 Boys 110m hurdles final with one of the favorites Dejour Russell being disqualified after false starting. The black, green and gold still triumphed with Damion Thomas overcoming a somewhat sluggish start to outclass rivals to win in 13.32 (3.7 m/s). Branson Rolle of Bahamas (13.80) was a distant second.

Rohan Cole’s task was simple. Win the U20 division and complete another sweep for Jamaica. The 1st year University of Technology (UTech) student did just that pulling away from rivals to take the gold in 13.71 (0.9 m/s). Cole was a member of the Gold medal winning sprint relay team. Timor Barrett who won the 400m hurdles on Day 2, failed to finish the event.

*Another Relay sweep for Team Jamaica*

The U18 Girls turned the 4x400m relay into a procession. The team comprising Samoy Powell, Shiann Salmon, Stacey-Ann Williams and Sanique Walker won the Gold in 3.39.31. The Bahamas was second in 3.43.08 with British Virgin Islands claiming the Bronze in 3.47.43.

The U18 Boys with Christopher Taylor on anchor toying with his Barbadian rival double record holder Jonathan Jones, ran out easy winners of the 4x400m in 3.12.54. The other members of the quartet were 100m champion Jhevaughn Matherson who ran the 3rd leg, Dashinelle Dyer who won Bronze in the 400m hurdles and Anthony Cox who took Silver in the 800m earlier on the final day.

The quartet of Semoy Hemmings, Satanya Wright, Junelle Bromfield and Tiffany James won the U20 mile relay by the proverbial city block. Team Jamaica stopped the clock at 3.34.84 almost 14 seconds ahead of Bahamas (3.48.06). Hosts Grenada was 3rd in 4.11.10.

Jamaica’s U20 Boys 4×400 team closed the show on the track and in the process secured the 2nd relay sweep of the games with a big win. Akeem Bloomfield on anchor allowed his Bahamian rival to open up a 3m lead before lengthening his strides impressively to overhaul him approaching the bend after which it was just a matter of how wide the margin of victory would be. The winning time was 3.10.55. The other members of Team Jamaica were Javauney James, Nathan Brown and Timor Barrett. Bahamas was 2nd in 3.12.99 with Barbados a distant 3rd in 3.19.63.

Cemore Donald was expected to win the U18 Girls 800m and once again she obliged in very convincing fashion. Donald who is unbeaten in 2016 cruised in to win the Gold in 2.10.66 ahead of teammate Chrissani May (2.13.90) as Jamaica completed yet another 1-2. The Bronze went to Quanisha Marshall of the Bahamas (2.14.64).

Jamaica’s Anthony Cox (1.52.23) ran a brave race to secure the Silver medal in the U18 Boys 800m. The event went to the overwhelming favourite Jonathan Jones of Barbados who put on a magnificent display to crush rivals and in the process smash the old mark set in 2011. Jones won in 1.49.88 for his second record of the meet.

Junelle Bromfield, the ‘Champion Girl’ from the recently concluded Boys and Girls Track and Field Championships was again in a league of her own. The Jamaican who was chasing the U20 800m meet record of 2.05.90 set by Natoya Goule in 2008, fell just short of that target but managed to lower her personal best to 2.06.21 in securing the Gold medal. Jamaica’s other entrant Asshani Robb who won the 1500m suffered interference early in the race and did not finish.

Shevon Parkes and Nathan Brown continued the familiar 1-2 finish for Jamaica. Parkes secured his 2nd Gold medal of the games as he out-paced compatriot Brown to win the U20 Boys 800m in 1.51.73. Brown crossed the line in 1.52.99 for 2nd while Nathan Hood (1.53.61) gave the home crowd reason to celebrate with the Bronze.

It was another Jamaican quinella in the 200m for U18 Girls. Defending champion Shaneil English retained her title in 23.65 ahead of Long Jump champion Britany Anderson (23.74). Bahamian Devine Parker (23.86) took the Bronze.

Jamaica had a lone warrior in the U18 Boys equivalent but it did no matter as Michael Stephens made sure of the Gold medal with an impressive run from lane 8. Stephen’s went off to a fast start and though passed in the straight conjured up a very strong rally to win in 21.43 (-1.9 m/s). Tyrell Edwards of Trinidad and Tobago (21.56) and Matthew Clarke of Barbados (21.75).

For the second straight year, Team Jamaica failed to medal in the U20 Boys 200m. Andel Miller ran a strong first 100m to come into the straight in about 4th position but came under pressure and faltered to finish 8th. The race was won by Akani Hislop of Trinidad and Tobago in 20.89 (4.5 m/s). Coull Graham of Antigua and Barbuda (21.05) was 2nd while the defending champion Mario Burke of Barbados (21.14) could only manage 3rd.

Warren Barrett Jnr. had the distinction of twice breaking the record in the U20 Boys Shot Put. Barrett first threw 19.83m to obliterate the previous record of 19.47m set by another Jamaican Ashinia Miller in 2011. He was not satisfied with that effort and returned a few minutes later to eclipse that mark with a monster throw of 19.97m. Barrett’s teammate Sanjae Lawrence made up for his disappointment in the Discus by taking the Silver.

Phillipe Barnett and Roje Stona outclassed their opponents in the U18 Boys Discus to secure yet another 1-2 finish for Jamaica. Barnett won the Gold with a record-breaking throw of 60.44m with Stona proving to be best of the rest with 55.30m.

*Medals for Buchanan and Morgan in bizarre 5000m final*

Shane Buchanan and Garfield Morgan secured Silver and Bronze for Jamaica under bizarre circumstances in the Boys U20 5000m run. In one of the strangest races ever seen at CARIFTA, the long time leader Benjamin Najman of Bahamas who had a commanding lead stopped after thinking that he had finished the race.

The bell rang to signal a lap to go and the officials told the Bahamian that he had one more lap to run. The other athletes continued to run and it was later discovered that the officials missed a lap count. The very aware Najman was declared the winner after the mistake was acknowledged.

The U20 Boys Triple Jump was fruitful for Team Jamaica and the prolific Obrien Wasome. After claiming Silver in the event in 2015, the outstanding Wasome closed his CARIFTA career in style by going one better this year. He cut the sand at 16.09m to win the Gold ahead of teammate Jordan Scott (16.01m). Wasome who was a double silver medal winner in 2015, had earlier added to his CARIFTA medal haul in the Long Jump where he finished in the
runner up spot.

Sahjay Stevens picked up the Bronze medal in the U20 Girls Javelin with a best throw of 41.91m. Britney Kerr secured the Silver medal in the U20 Girls High Jump with a best clearance of 1.73m, the same as Ashanti Phillips of Barbados who won on count-back. Shakwon Coke had a wretched time in the U18 Boys Long Jump with five foul efforts. His 3rd round jump of 7.05m was however, good enough to secure the Bronze.