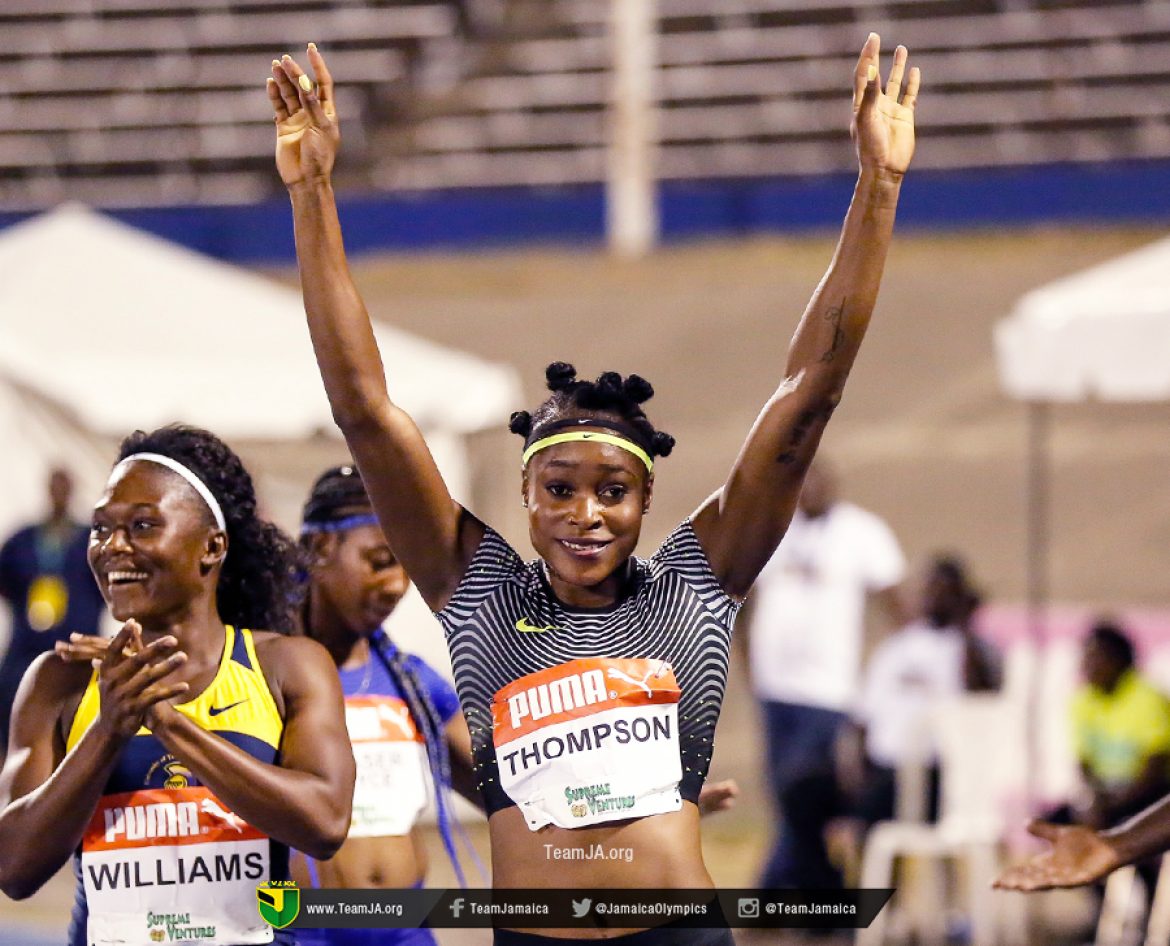 In arguably one of the most scintillating displays of sprinting at Jamaica’s storied National Stadium, the irrepressible Elaine Thompson underlined her status as one of the favourites to win the 100m title at the Rio Olympics later on this summer. Thompson who had scorched the track with a frighteningly easy-looking 10.85 to win her semi-final, returned approximately two hours later to demolish a very strong field on her way to winning the 100m title in a national record equaling and world leading 10.70 (0.3 m/s).

Left toiling in her wake were the two time Olympic champion Shelly-Ann Fraser-Pryce with a satisfying 10.93 (SB) and Jamaica’s newest member of the sub 11 club, Christania Williams 10.97. Thompson who celebrated her 24th birthday on June 28 is now the joint 4th fastest woman (tied with Fraser-Pryce) over the distance behind Florence Griffiths Joyner, Carmelita Jeter and Marion Jones.

Many time national champion Veronica Campbell-Brown in a race eerily reminiscent of the 2008 Olympic Trials, got off to a horrible start and despite a gallant attempt was unable to reel in the fast starting trio of Thompson, Fraser-Pryce and the exciting Williams. Campbell-Brown finished 4th in 11.10, just ahead of Simone Facey (11.11) and the much improved Sashalee Forbes who equaled her personal best of 11.17 which she also ran in the semi-finals. Thompson, Fraser-Pryce and Williams are all coached by Stephen ‘Franno’ Francis.

It was a welcome return to form for Fraser-Pryce who has been struggling with a toe injury this season. The 29 year old was well below her best but showed her usual battling qualities to ensure that she will get a chance at creating history in Rio where she will be going for an unprecedented third straight 100m crown.

“I feel good. The aim was to come out here and qualify….I did just that so i am happy for the opportunity to go out and represent my country as well as for the chance to defend my title”, said an obviously relieved Fraser-Pryce.The diminutive sprinter, who has earned the moniker ‘Pocket Rocket’ for her blistering starts, indicated that the toe injury which had plagued her for much of the season was still a major cause for concern.

Williams, the former Edwin Allen standout was a picture of elation, embracing her more accomplished training partners after the race. The 21 year old became the 13th Jamaican woman to break the 11 seconds barrier and her run of 10.97 makes her the 11th fastest Jamaican over the distance.