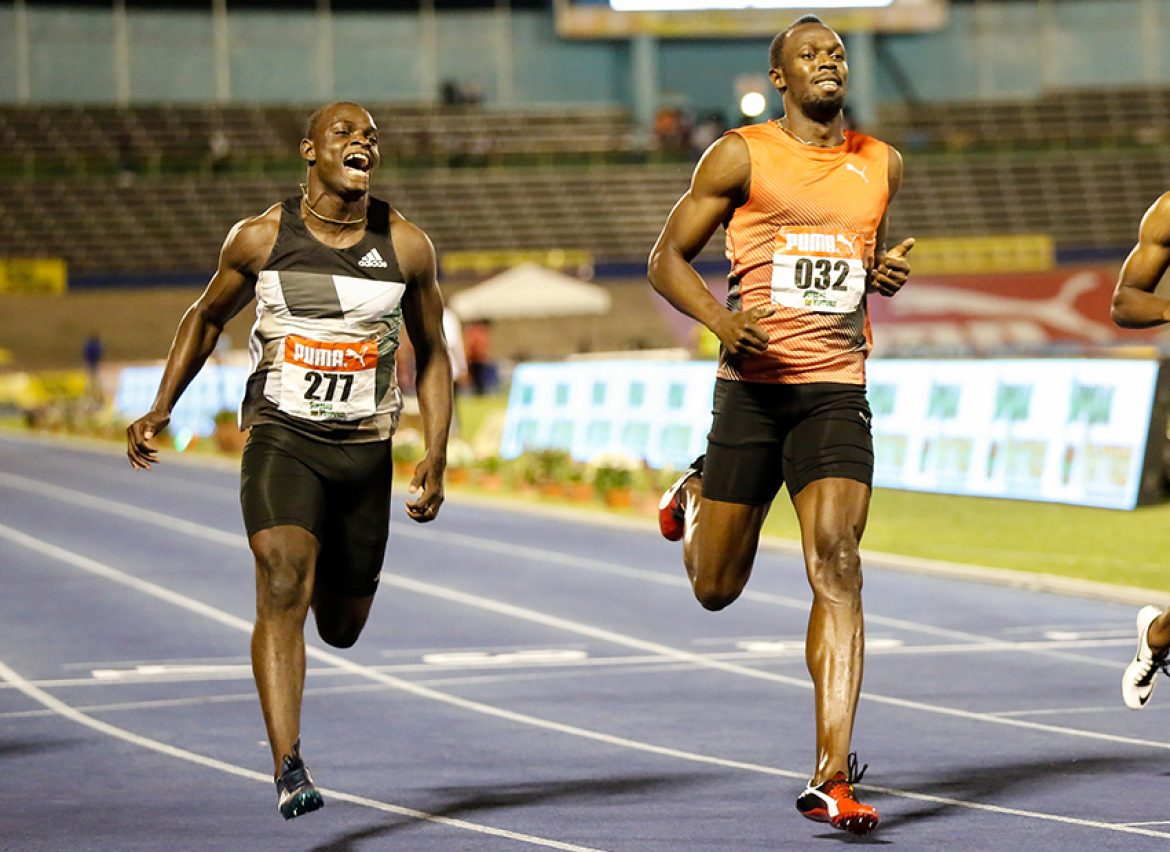 In 2011 while comfortably in the lead in the U17 Boys 200m at the CARIFTA Games held at the Catherine Hall Sports Complex, the then 15 year old Jevaughn Minzie displayed one of the most extreme cases of showboating ever seen at that level. With 50m to go, Minzie who appeared to have the race at his mercy, inexplicably turned his head and mockingly beckoned the 400m champion Machel Cedenio who was on his outside.

That moment of madness would come back to haunt him within seconds as the far striding Cedenio gleefully grasped the opportunity with both hands to sweep past Minzie who totally lost momentum. The visibly stunned and shaken Minzie was rooted to the track before sauntering off. The Jamaican supporters at the venue had no qualms about venting their frustration at him. Various videos were posted about the young man’s slip, social media went into overdrive and he was the subject of much criticisms on various sports talk shows in the ensuing weeks.

He was the butt of many a joke and one Youtube video of the race had the heading “USAIN BOLT WANNABE JEVAUGHN MINZIE EMBARRASSED HIMSELF SHOWBOATING IN 200m CARIFTA GAMES FINAL”. The young man rebounded quickly at the same games to run a decent 400m leg in the mile relay but that provided very little reprieve.

The Bog Walk High School standout was not daunted and for the next few years established himself as one of the top junior sprinters in Jamaica and the region. He constantly kept finding one or two better at the prestigious ISSA Boys and Girls Championships (“Champs”). At the 2014 edition of Champs, Minzie was involved in a titanic 100m finals with Anguillan born Kingston College star Zharnel Hughes. A gallant Minzie ran 10.16, the fastest time ever run by a Jamaican at Champs but had to settle for second behind Hughes’ record run of 10.14.

Minzie closed out his high school career with his first gold medal after winning the Class One 200m final. News emerged shortly after that he had joined the world famous Racers Track Club home of track legend Usain Bolt where he would be conditioned by the guru Glen Mills. Track fans were excited at the prospect of Mills moulding another diamond in the rough into a world beater as he had done with the likes of Bolt, Blake and to a lesser extent Warren Weir and Kemar Bailey-Cole.

It is never easy to make the transition from high school sprint star to the hallowed halls of arguably the world’s sprint capital. The progress of Cedenio on the world stage was also there as a constant reminder and perhaps more importantly, a big motivation. After a slow start to his first year as a senior, Minzie showed glimpses of his potential at the 2015 Jamaica Senior Championships clocking a decent 10.18 in the preliminaries to advance to the semi-finals. He finished a disappointing last overall with a time of 10.75 and reportedly picked up an injury.

The 2016 season looked set to be another testing year for the 20 year old. After several outings over 400m and some over his preferred distances (200/100m) produced nothing even remotely indicative of a great season in the offing, the usual talk started making the rounds. Minzie was ready to be cast by many into the graveyard of washed up former high school stars and even moreso as he appeared to be out of shape and overweight, never mind that it was early in the season. Many saw him in the company of Jahzeel Murphy and Odail Todd, other high school stars who had so far failed to make the transition. Some were mean enough to say the trio were spending too much time in the kitchen.

Minzie looked better and better as the season wore on but few in their right mind gave him any chance of being a serious factor at the Jamaican Olympic Trials. The big coaches however have the knack of getting their athletes to peak at the right time and in men’s sprinting there is none bigger than Glen Mills. Minzie turned up for trials noticeably much leaner and seemingly with a lot of confidence.

He ran a personal best 10.15 in his preliminary round heat ahead of Jamaica’s newest member of the sub 10 club Senoj Jay Givans and the self proclaimed “Sub Ten King” Asafa Powell. He was drawn in the easier semi-final and produced another personal best (10.07) to finish 3rd behind Bolt and Givans thereby advancing to his first national senior men’s 100m finals. Few gave him any chance of finishing in the top 5 much less the top 3 with seasoned campaigners like Blake, Powell, Bailey-Cole, Ashmeade and Livermore among the finalists.

Yet again he defied the odds, out-dipping a stunned Powell in a blanket finish for the all important 3rd spot and a place on the team to the Rio Olympics. Minzie had produced yet another personal best stopping the clock at an impressive 10.03. He may not get the opportunity to run the individual 100m given the medical exemption granted to Bolt but that is for future discussion. The 20 year old has come of age and it will be interesting to watch his progress from here on in.