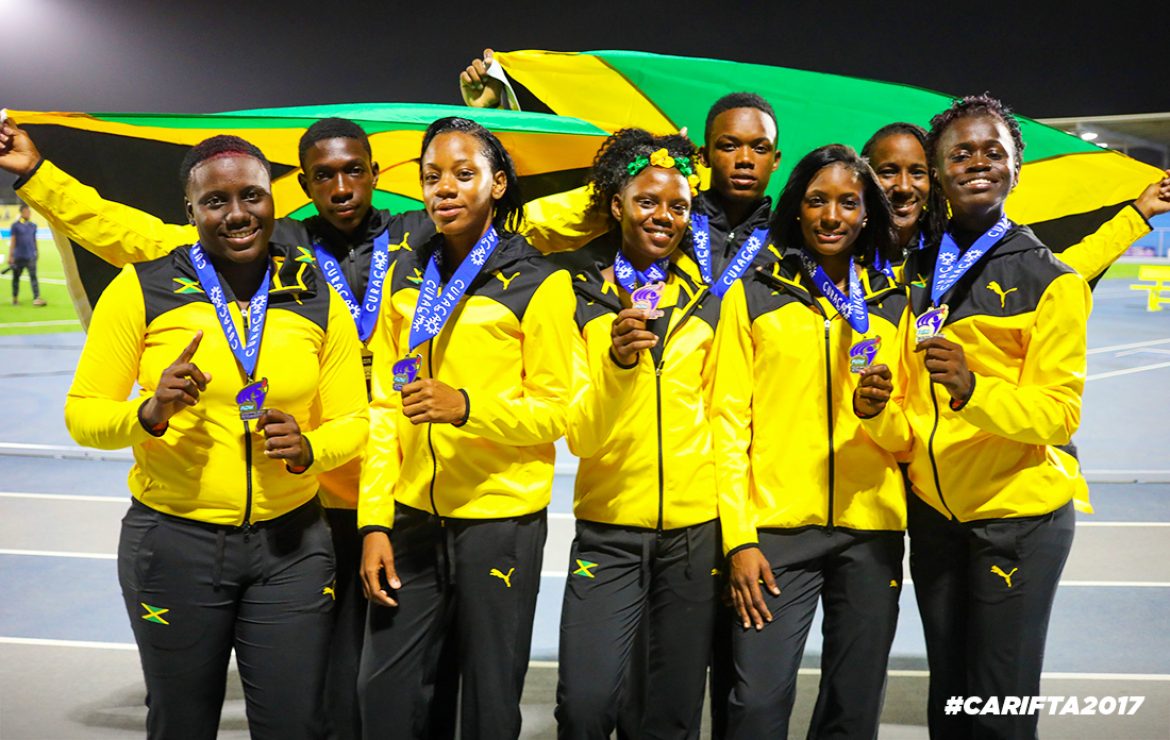 Each year our U20 and U18 Track and Field ambassadors proudly don the Black, Green and Gold as they compete against regional rivals at the CARIFTA Games. There is the expectation of dominance with successive contingents eager to emulate if not surpass the previous year’s medal haul.

The 84 member team to the 46th edition in Curacao was no different and from day one went all out to stamp their class on proceedings. Led by the indomitable lion Christopher Taylor and lady knight Junelle Bromfield Team Jamaica flexed its muscles to once again ‘Jaminate’, its medal chest adorned with 39 Gold, 28 Silver and 19 Bronze for 86 medals overall.

The athletes often competed in conditions that were not conducive to optimal performances but there were several who distinguished themselves with record breaking performances.

Daniel Cope was the only athlete to leave with two records. The 17 year old secured Gold in the U18 Boys Discus Throw with a mark of 61.25m to erase the one year old mark set by compatriot Phillipe Barnett in 2016. Cope’s record throw is the 3rd best in the world this year in the Youth (U18) Category.

Cope also set a new standard in the Shot Put with 18.17m to shatter the previous record of 17.75m held by fellow Jamaican Zico Campbell.

The impressive Fiona Richards was a class above her rivals in the Girls U20 Discus with four throws over 54.00m, moving the record to 54.19m. Richards is now ranked number six in the world in the U20 age cohort.

Roje Stona was another thrower who got in on the record-breaking act. Stona obliterated Chad Wright’s 2014 mark of 63.11m with a massive throw of 66.41m. The Jamaican now sits atop the 2017 World ranking in the U20 Division.

Britany Anderson was expected to break the U18 Girls sprint hurdles record of 13.29 set my Janeek brown in 2015. Anderson who has the top four marks in 2017 including a world leading 13.04 duly obliged by lowering the CARIFTA Record to 13.16 despite a strong headwind of 2.1m/s.

The versatile Sanique Walker has the world leading time of 57.27 so it came as no surprise when she powered her way into the CARIFTA record books. Walker made light work of the field to win in 58.95 to better the 2016 record of 59.50 by another Jamaican, Shiann Salmon.

The U18 Boys 4×100 team in a performance characterized by smooth but conservative exchanges erased the one year old mark of 40.40 set by a powerful Jamaican quartet in 2016. Michael Stephens, the only returning member of the team from last year anchored the team to a championship record and National Youth Best of 39.97. The other members of the team were Michali Everett, Xavier Nairne and Tyreke Wilson. Jevaughn Powell ran in heats.