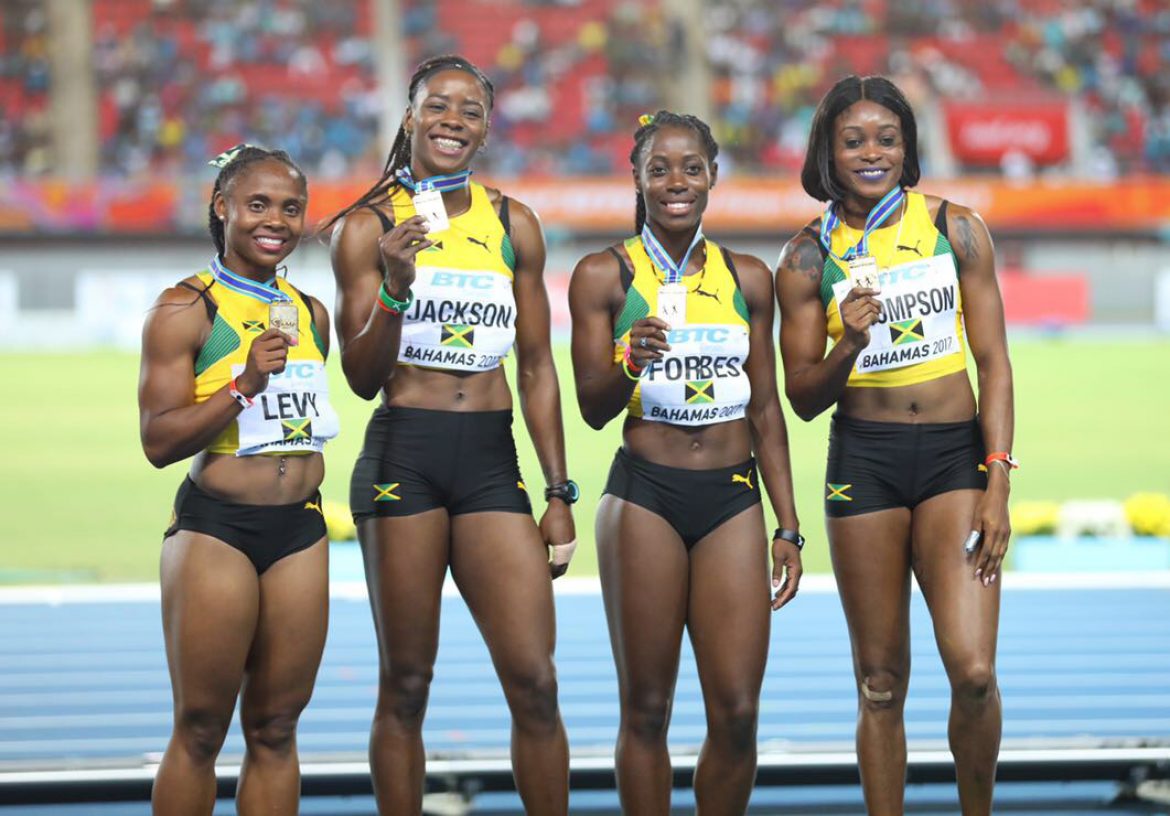 The world is used to the melodic sounds of Jamaica’s National Anthem being played in stadia around the globe as our ambassadors scorch the track with gold medal winning performances and the first day of the 3rd IAAF World Relays was the perfect occasion for another rendition. This time it was the Women’s 4x200m who turned in a scintillating performance to win Gold in front of a crowd with a large Jamaican contingent at the Thomas Robinson Stadium in Nassau, Bahamas.

The quartet of Jura Levy, Shericka Jackson, Sashalee Forbes and double Olympic Champion Elaine Thompson on anchor dismissed their rivals to win with consummate ease, in the process smashing the previous championship record of 1.29.45 with a time of 1.29.04. So dominant was the display that the Black, Green and Gold standard-bearers were well over a second clear of Germany (1.30.68) and the USA (1.30.87).

The Jamaicans were like poetry in motion on all legs with brilliant running and smooth exchanges. The ever reliable Anastasia Le-Roy ran the anchor leg in the heats. It was Jamaica’s first win in the event after Bronze in 2014 and Silver in 2015.

It wasn’t all smooth sailing for the Jamaicans on Day One. In the Men’s 4x100m Relay, Jamaica failed to progress to the finals after a botched 2nd exchange between Kemar Bailey-Cole running the backstretch and Jevaughn Minzie on the third leg. The opening leg was run by Everton Clarke who handed over in the lead. Team captain Yohan Blake watched in disappointment as Jamaica’s chances of dethroning 2015 champions the USA went up in smoke. Clarke in an interview after the race blamed the mishap on a ‘misunderstanding’.

The final was also full of drama and turned out to be anti-climatic with the expected showdown between the USA and Canada failing to materialize. The Canadians with the crowd behind them and with the exciting Andre DeGrasse on anchor also failed to get the baton around as did Great Britain and Northern Ireland, paving the way for an easy win for USA with Justin Gatlin on the glory leg. Barbados took silver in 39.18 with the People’s Republic of China in third (39.22)

The mile relay teams advanced comfortably to the finals set for tomorrow’s closing day. The quartet of Christine Day, Janieve Russell, Dawnalee Loney and women’s team captain Anneisha McLaughlin-Whilby finished 2nd in their heat behind winners Poland who won in a time of 3.29.42. Jamaica advanced to the finals in a season’s best 3.29.93, the third fastest of the eight qualifiers. Two time defending champion the USA had the fastest time of 3.29.27.

The men’s team of Javere Bell, Javon Francis, Peter Matthews and newcomer Demish Gaye on anchor ran well to finish 2nd in their heat in a season’s best 3.03.52. The race was won in 3.03.09 by a Botswana quartet including exciting youngsters Baboloki Thebe and Karabo Sibanda. Team Jamaica is the 4th fastest of the teams making the last eight. Trinidad and Tobago heads the list of qualifiers with 3.02.1 with USA, 3.02.62 the next best.

The USA were in pole position to retain the Golden Baton and at the end of the first day had 22 points. They won the Women’s 4x800m for a third consecutive time. Australia who was runner up in the 4x800m occupied second in the standings with 11 points. Team Jamaica sits in third on 8 points, one ahead of Germany in fourth.