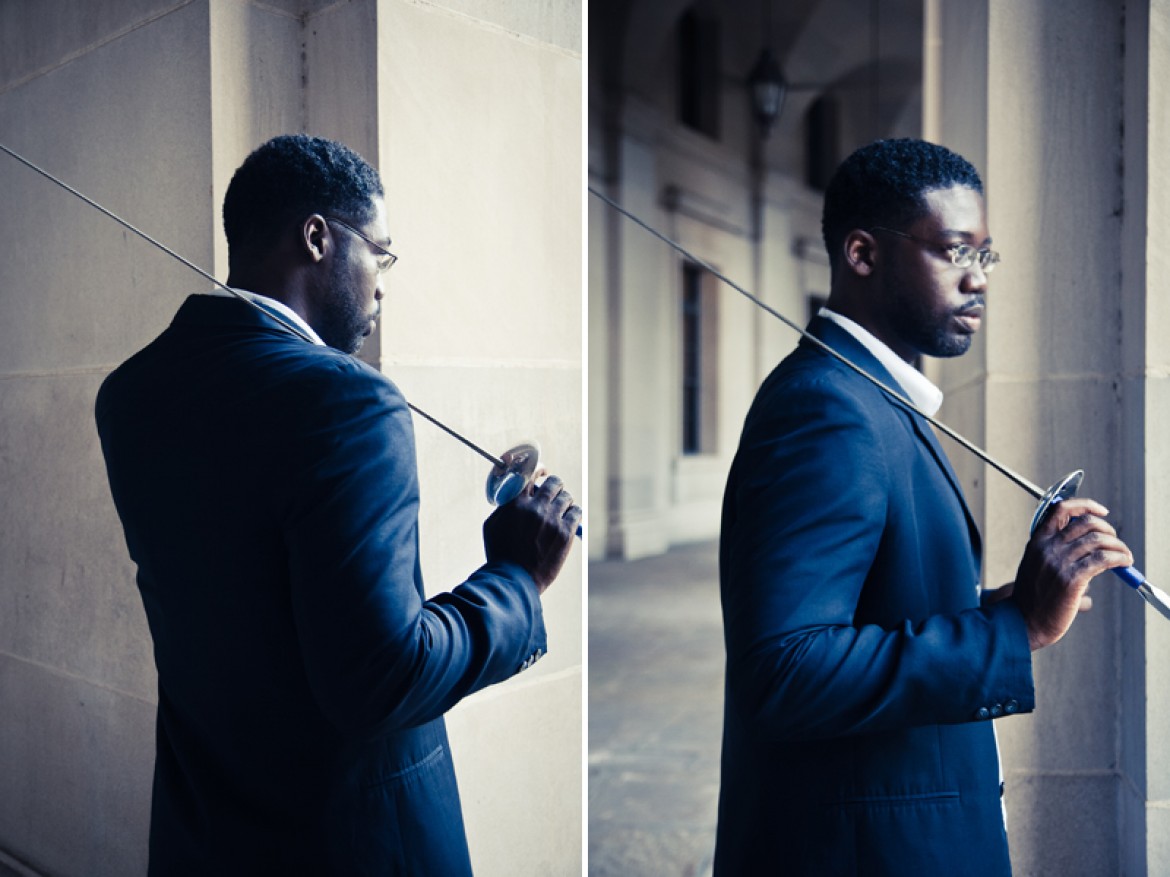 James McBean is an academic who’s combined his love for teaching with the principles he’s learned training for taekwondo and fencing. His nonprofit organization, the Jamaican Fencing Association, has finally received 501 (c)(3) status in the United States. This is just the beginning of a humbling undertaking to lift up the next generation of Jamaicans and expose them to a world they’ve never imagined. The challenges are many as he works on having at least one Jamaican fencer in the 2016 Olympic games. However, he doesn’t flinch. After all, he’s been cultivating this audacious spirit for years.

Sevan: What made you decide to do a fencing association for Jamaica?

James: Well, I’m a fencer myself, and I’m a Jamaican, so naturally I want to see it as a sport there. Fencing came into my life at a very pivotal point. I learned really important lessons and I feel that it’s best to teach and to share them. It’s not just about the fun of the sport, it’s actually about the lessons, about the wonder. It’s about the principles of the sport. And I want to share with my countrymen from Jamaica and also with my countrymen here in the U.S.

Sevan: How did you get into fencing?

James: I received my black belt in 1995, and prior to that, my instructor had promised me to use a sword, but he told me to wait until I got my black belt, which I did in June. Then he passed away in December of that same year when I entered into high school. And you know, coincidence would have it that one of the faculty members at my high school was a fencing coach…Hank Powell. He walked up to me one day and said, “Hey, why don’t you come and try this sport?” I wasn’t too self-aware at the time, but I guess I was going through some depression at the loss of my instructor, so I was pretty much zoned out and figured I would go into fencing, try it and respectfully tell this person that I wasn’t interested and that I was going to do basketball…naturally, right? So I took him up on his offer. I went to practice wearing my big, heavy basketball sneakers and a pair of jeans, and I never looked back.

Sevan: How long have you been working on this?

James: I’ve been working on this since the early 2000s, when I was in college at Brandeis. You know you find yourself in college becoming very nationalistic. You learn more about yourself and your heritage and I began to represent myself as a Jamaican fencer. So much so to the point that other fencers would ask me if I came from Jamaica, and if I was a representative of Jamaican national team and I would say “Well, I learned to fence here in the U.S.; I’m just representing Jamaica, you know, out of national pride.” But actively since 2007, the non-profit has been in operation and then progress was halted in 2008 when I moved to Mexico. Then it was revived again in 2009, and we’ve picked up considerable speed since then.

Sevan: What keeps you going?

James: What keeps me going? There’s a push and there’s a pull factor where this is concerned. The push are those same five principles that I inherited from my taekwondo instructor: etiquette, modesty, perseverance, self-control and indomitable spirit. It’s the concept that one should not give up, should keep fighting. Being an immigrant to the U.S., being a Jamaican, being an American—all these things…these three things combined all kind of make one very indomitable. Makes you push and push…and keep driving. It makes you persevere. But at the same time, the pull factor is that this is a beautiful thing. This is a beautiful sport. This is a beautiful culture and a beautiful way of life that I most certainly want to share with those in Jamaica. This is a sport that I think can absolutely change the perception—the lives of young people, which would then turn over into changed lives. This isn’t going to pay me millions of dollars but the outcomes that I expect push and pull me to keep going.

Sevan: What is it about fencing that you think changes lives?

James: Well, fencing is different from many sports in that there is not a drive for financial gain. Athletes don’t come into the sport thinking of being rich one day or making it to the pros where they make millions of dollars. Fencers who come into fencing are not coming into the sport thinking of how lucrative it will be. If a fencer is involved in fencing they are learning principles. They are learning respect for self, respect for opponent, respect for their own skills, how to interact with your body, how to be in harmony with your opponent. The youth of Jamaica who get involved with a sport like this will learn these values. They won’t walk away with this instant, gratifying mentality. It will actually teach them how to be respectful in self and respect for another and I think these are traits that will transfer into other areas of their lives.

Sevan: How does this fit with your other personal goals?

Sevan: So overall do you think a control over one’s body is something that’s missing? Why is that so important?

James: It’s very important because a lot of us don’t fully understand…I don’t think a lot of us fully understand our physicality and what it means to be in control of one’s own subjectivity, one’s own body. A lot of us are so caught up in cultures that have been so comodified that we lose control of our bodies. We go in search of items that will validate ourselves. But these are often externally imposed. We have a culture oftentimes whereby we as Jamaicans look outside of the island for validation, and it might sound counterintuitive where I’m doing something from the outside to help us validate ourselves, but it’s not counterintuitive because this sport makes one think independently, makes one think of how one’s body could be in most harmony with your own adversary. I mean, I’m not sure if I’m saying that correctly, but it’s important because I don’t think we are in full control of our own selves because we continually look outside for validation and so we’re not respecting our own control, our own power. And so I think this sport will definitely teach individuals how to be in control of their own physicality, of their own bodies, think independently for themselves. And not so much on the goals set by external forces.

Sevan: Why did you decide to get your Ph.D.? Is that something that you always knew you would do?

James: No, it’s not something I always knew that I would do. I was one of these people that unfortunately was brainwashed to think that I belonged in a boardroom in a suit and tie analyzing business. It wasn’t until I was living in Mexico City and lecturing at the Escuela Bancaria y Comercial that I realized I actually loved this. I loved being in the classroom. I loved teaching. I loved instructing. I loved sharing. I loved interacting with these young people. I was also doing socially responsible work with this university. We worked with indigenous populations in Mexico, and it was this experience that made me realize I really love being in the classroom. The opportunity had come to me a couple times before in DC, but I shunned it. I side-stepped it because of course I was conditioned to think I was supposed to be a corporatized professional of some sort and being in the classroom was not “professional.” But I realized I loved it and I decided at this point if I want to continue doing what I’m doing in Mexico I need to get a Ph.D. in the U.S. So I applied for Ph.D. programs that most suited my interest, my experience, and I went for it.

Sevan: Where else have you traveled to?

James: I’ve lived and studied in Cuba, Honduras, El Salvador, the UK, Guatemala and of course my second homes…well I mean, Jamaica and Mexico.

Sevan: How do you think traveling has shaped you?

James: Well, you know what, traveling has shaped me tremendously, and it made me realize that I am more than what American society makes me out to be. What I mean by that is that in the U.S. one’s world is oftentimes limited by U.S. boundaries. And going outside of the U.S., now you have other cultures and other perspectives off of which you can bounce yourself. Here in the U.S. you’re exposed to a lot of opportunities but oftentimes socially it’s difficult for black males to see their fullest potential in the U.S., given the societal pressures and the subliminal messages. When you go overseas and you hear someone tell you that they love your skin, it sends another message to you.

When you go to Cuba and someone tells you that they are really interested in African-American culture, even though I myself am a Jamaican, it still sends shockwaves through you. It’s just not something that you hear about in the U.S. People don’t always show that much interest besides Black History Month. And within academia, you don’t see your average person showing this much interest in your blackness. And then just the culture in places like Guatemala, El Salvador and Mexico, really makes you think about your own culture as a Jamaican, as an American, and it helps you situate yourself. It helps you situate yourself in relation to their culture. It makes you see how rich your culture is and at the same time when they see something in you from their perspective, that you haven’t quite received on home turf, it’s really encouraging.

Learn more about the Jamaican Fencing Association on Facebook. You can also help support the JFA by taking part in Macy’s Shop For the Cause.

by Shannon Evans from http://www.thesevanblog.com/2011/07/james-mcbean/