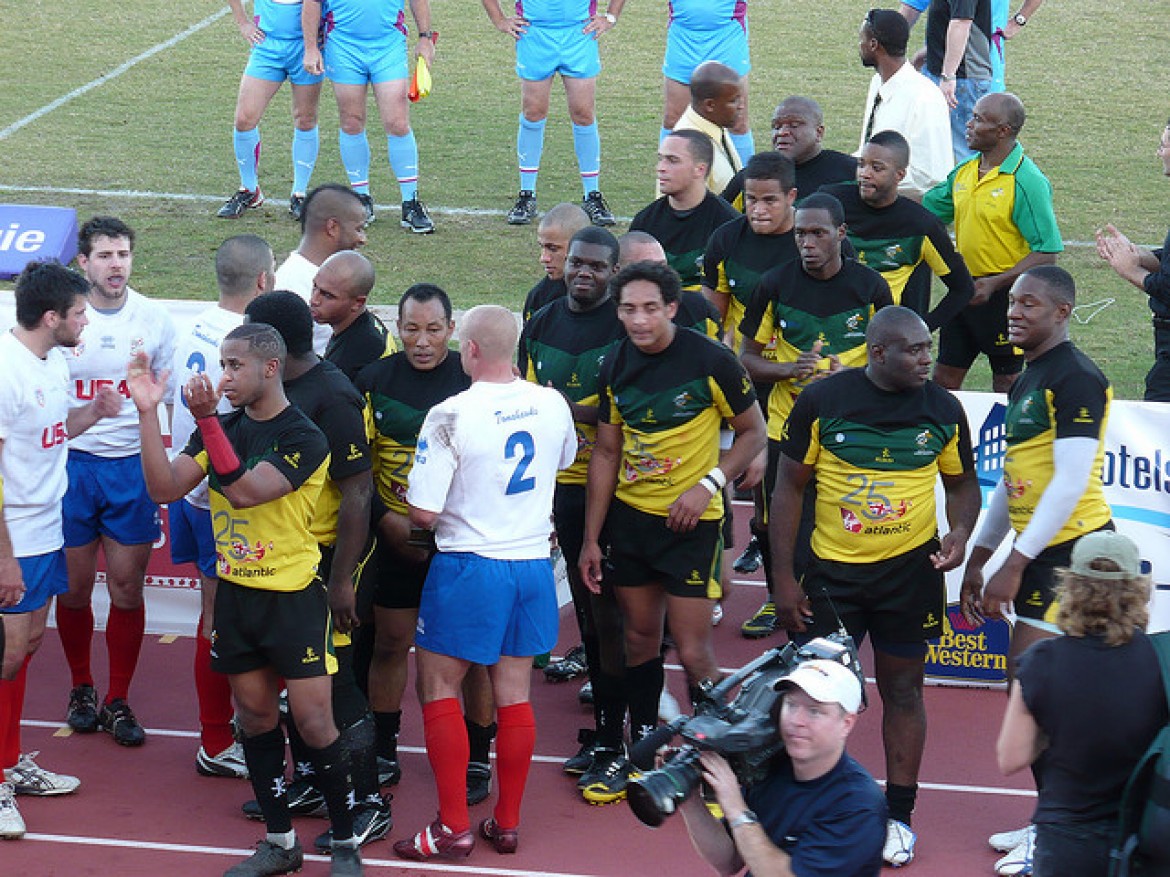 Debutants Jamaica entered the stadium to thunderous applause their coach Conroy O’Malley put down to the Usain Bolt factor, as the tiny nation rides a wave of sporting popularity instigated by six-time Olympic sprinting champion’s exploits.

“He set the trend for us so I expected this to happen,” said O’Malley.


The support wasn’t enough to lift the side to victory, as they fell 27-17 to Georgia as the world series pre-qualifier got under way, but there was enough talent on show from the Jamaicans to keep the crowd happy – and to warn rivals they won’t be easybeats over the weekend.

“Basically, I said coming out here just to go out and put on a good show,” said O’Malley. “I was expecting a little bit more from them. I thought they would be a little bit too forceful but that didn’t happen so I am happy with that.”

The Jamaicans found it tough to deal with the brute power of Georgia’s Irakli Machkaneli (two tries in the first half) and Viktor Kolelishvili (two in the second) but they rallied as the game wore on, despite being reduced to six men twice for infringements.

“It didn’t do much damage,” said O’Malley. “We had to get technical and that helped us a lot, plus putting on some fresh legs. A lot of folks may have expected us to be trampled so with a score of 27-17 they will look at us a bit different from here on.

“We haven’t had as much focus on us back home as I wanted but I expect it will get better.” Joseph Shae became the first player from the island to score in Hong Kong when he found wide, open spaces on the right a minute and a half after the restart – and he grabbed his moment in the spotlight with significant style of his own, leaping high into the air before plunging the ball into the turf.

The 25-year-old revealed a trip to the Sevens had been a dream since he first started playing the game, aged eight.

“It just felt great to get here. I am happy. It’s the first time I have played in front of a massive crowd so I wanted to make it something nice, something pretty for them,” Shae said.

“I have always followed the Sevens, watching it on TV, and it is a thrill for me and everyone on the team.”

Jamaica’s two other games in Hong Kong were a 43-0 loss to Asian powerhouse Japan, and a 31-5 loss to Brazil, another Hong Kong newcomer. The weekend ended on a high note, however, with Jamaica scoring its five points against Brazil with a last second, air-borne try.

Rowe said he was proud of his team, and he expected to come back to Hong Kong next year, with a better result. Gazing out at the field on Saturday, he was struck at the quality of the event, and of the pitch.

“That field is like velvet compared to ours back home,” he said. (Editing by Justin Palmer)