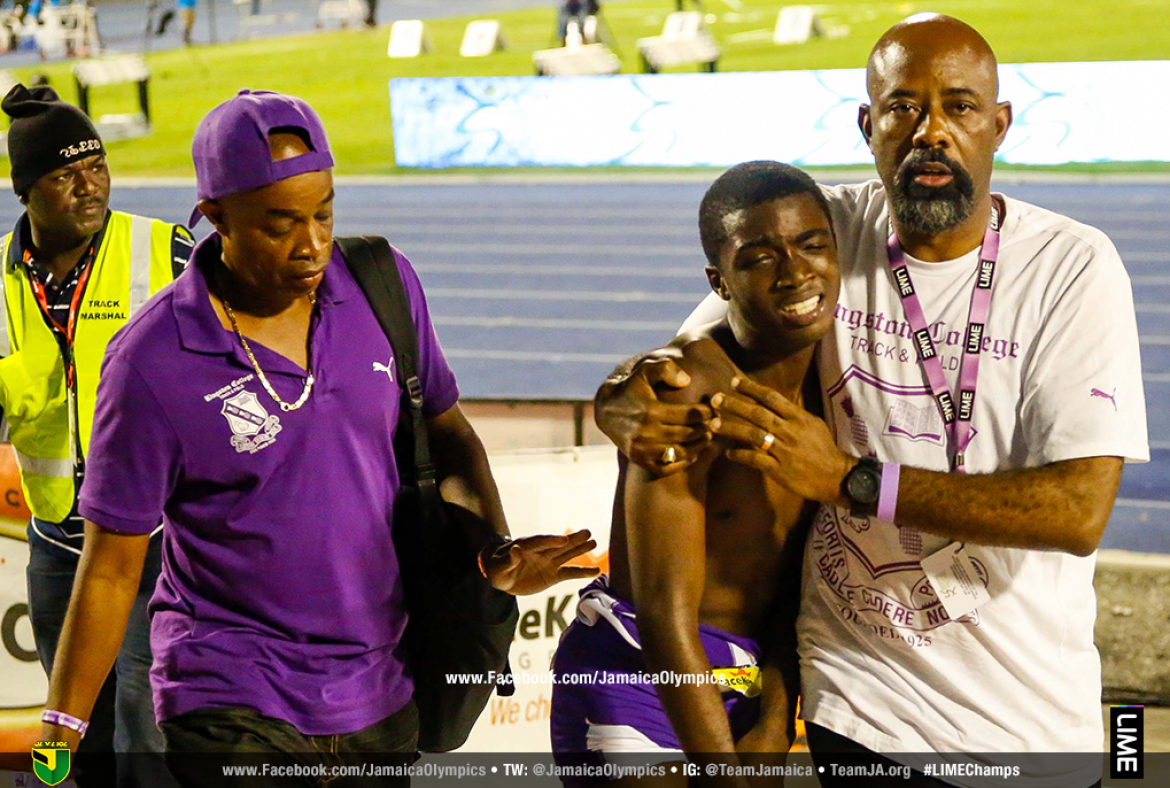 At the end of Day 3, Kingston College (KC) appeared down for the count having suffered a potentially fatal body blow in their quest to tame the lions and cubs of the Calabar. KC’s ace Class Two sprinter Jhevaughn Matherson pulled up in his semi-final of the 200m as supporters of the North Street giants looked on in stunned silence.

Meanwhile the Calabar Lions continued to roar ferociously with their cubs in Class Three taking a cue and rising above pre champs predictions. Calabar was responsible for the two records to fall on the day with last year’s 4th place finisher Shakiel Chattoo breaking the Decathlon record amassing 6988 points in the grueling 10-event competition and 13 year old Lamar Reid’s record jump of 1.99m surpassing the record of 1.98m set over 22 years ago.

The Red Hills Road institution lost the Class One Discus title when Demar Gayle of Edwin Allen threw 50.70m to take the Gold ahead of Calabar’s Warren Barrett Jnr. and Sanjae Lawrence of Petersfield High. KC did not end the day empty handed as Rasheeda Downer with a throw of 16.47 won the Boys’ Class two Shot Put ahead of the Calabar pair of Andre Chin and Savion Burke.

Calabar’s brilliant day was also reflected in qualifying events with big names Michael O’Hara and Edward Clarke comfortably advancing to the semi-finals of the 100m in Class One; Tyreke Wilson and Dejour Russell doing likewise in Class Two. Raheem Chambers of St. Jago, considered by many to be O’Hara’s only threat in the 100m also advanced in ridiculously easy fashion. KC’s Chadayne Walker and Waseem Williams of JC also progressed. Nigel Ellis and Okeen Williams of STETHS also took their place in the semis. All the favourites in Class three advanced with Tawaine Garrigues of St. Jago, Javier Johnson of Green Island and KC’s Akeen Smith leading the way.

The Calabar roar was also very loud in the 200m especially in Class Two with the super impressive Christopher Taylor winning his semi-final in 20.97 throwing down a challenge to team-mate and Class Three record holder Tyreke Wilson who showed rivals a clean pair of heels in his semi-final where Matherson pulled up. O’Hara led all qualifiers in Class One with his main rivals including Chad Walker (St. Jago), Nigel Ellis (STETHS) and Twayne Crooks (KC) also advancing to Saturday’s final.

Defending champions Calabar closed the day on 60 points, 20 clear of Day 2 leaders Jamaica College with a limping KC on 33 points.