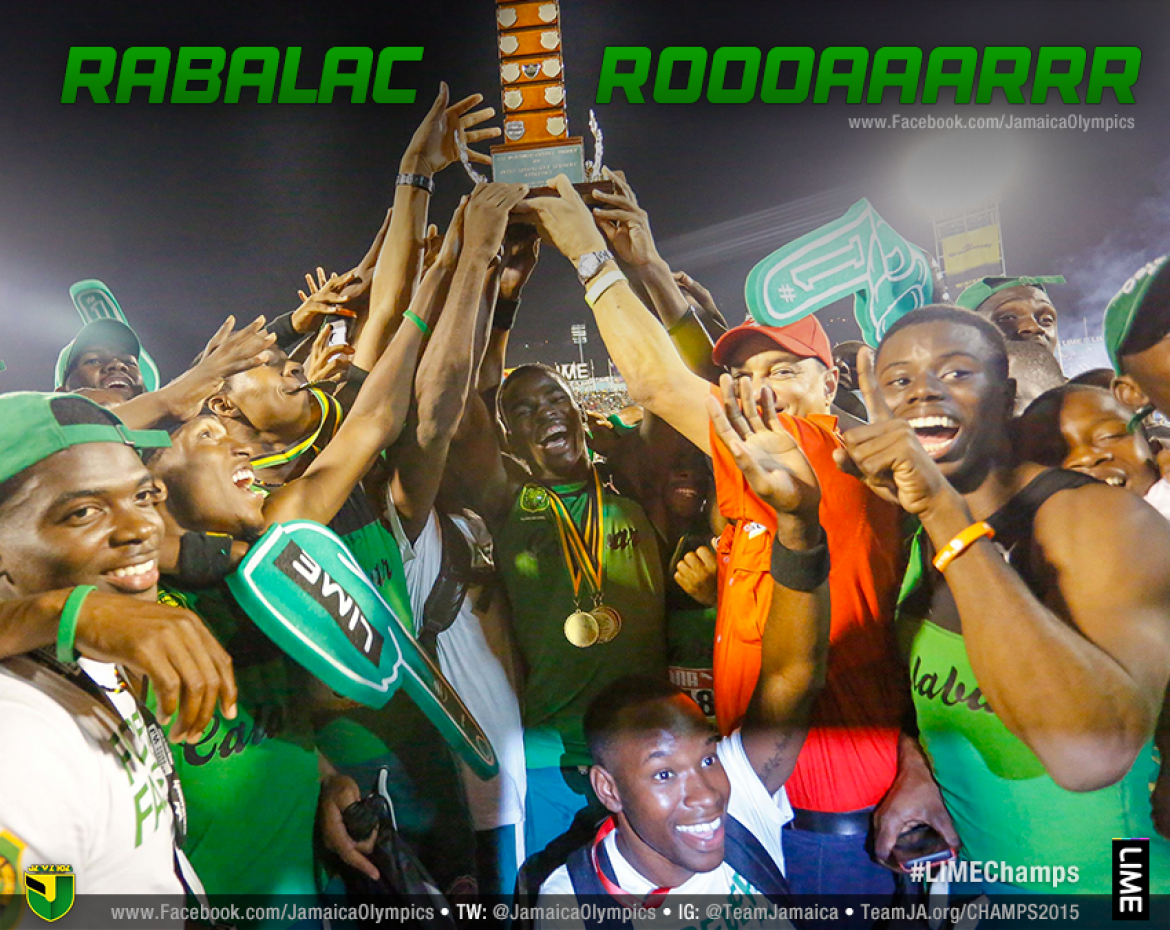 Day 4 of ‘Champs’ closed with a promise of a drama-filled, record-breaking last day showcasing the best Jamaican high school athletes in final after final and the destination of the Boys’ and Girls’ titles still to be decided.

Track royalties Usain Bolt, Shelly-Ann Fraser Pryce and Donovan Bailey (1996 – Atlanta Olympics Gold Medalist) were among the 30,000+ spectators at the National Stadium, the thousands viewing at home in Jamaica and via streaming throughout the diaspora.

JamaicaOlympics as it has done with its pre-champs coverage and since the start of action on Tuesday was also on hand to bring the final day’s truly special and at times incredible performances as they unfolded to its thousands of followers.

The final day of Champs 2015 lived up to all expectations with title favourites and defending champions Calabar High School and Edwin Allen retaining their titles in contrasting fashion. Edwin Allen (321 points) was in a league of its own brushing aside the challenge of St. Jago (221.33), Hydel (221) and Holmwood (206). Calabar (280.5 points)thwarted the persistent challenge of perennial rivals Kingston College (265 points) to win their 4th consecutive Champs Title. Jamaica College, St. Jago and STETHS completed the top 5.

The 400m finals across all classes had promised much and delivered more. St. Catherine High’s Anna-Kay Allen (53.46) was simply brilliant in holding off the gutsy Sanique Walker of Vere (53.59) as both athletes ran lifetime bests. Calabar’s Tajai Jackon recorded the fastest time of the season for Class Three boys winning in 50.52 while Taqece Duggan of Hydel (55.46) won in Class Two. Christopher Taylor battled blustery conditions and team-mate Anthony Carpenter to cop the Gold in the Boys Class Two in 47.04. Camperdown’s Dawnalee Loney who last year narrowly missed the Gold Medal while competing for Balaclava High ran the perfect race overhauling long time leader Tiffany James of Papine High to win in a respectable 52.78.

The Class One boys 400m was billed as one of the races of ‘Champs’ 2015 and it was historic in every sense. Kingston College’s Akeem Bloomfield had set tongues wagging two weeks earlier at the CARIFTA trials with a big 400m personal best of 45.41 and many were anticipating something spectacular especially with arguably one of the best 400m fields assembled in many years. Bloomfield had also posted on his Facebook page weeks ago that he was going to deliver a special performance for a friend who was killed a few weeks earlier while studying.

The 6’5 Bloomfield in his rookie season over the distance ran a very fast opening 250m then kept his composure to convincingly hold off the challenge of St. Jago’s Nathon Allen, who for the second year had to settle for the runner up spot behind a record breaking performance. Bloomfield stopped the clock in an electrifying 44.93 to not only remove Davian Clarke’s 20+ year old National Junior Record (45.23) from the books but also Javon Francis’ one year old ‘Champs’ record of 45.00 seconds as well. Allen posted a superb personal best of 45.30. It was the first time in Champs history that two Jamaican schoolboys were going under 46 seconds.

Michael O’Hara was not used to losing at ‘Champs’ but in 2014 in his rookie year in Class One, the versatile and ultra talented Calabar athlete experienced heartbreak after heartbreak and failed to win an individual gold for the first time in his ‘Champs’ career. The picture of him being consoled by ‘big brother’ Warren Weir was one of 2014’s Champs moments.

The lanky O’Hara had won the 100m title on Day 4 faced off against World Youth and Youth Olympic Champion Jaheel Hyde in the much hyped 110m Hurdles final. Drama unfolded as Hyde appeared to have false-started but the starter, to the delight of the massive crowd took responsibility signalling a ‘faulty’ start. The clash of the titans went off with Hyde early in the ascendancy but O’Hara as he has done so often in his Champs career found extra where it mattered most to peg back Hyde in one of the epics in Champs history. Ohara stopped the clock in 13.49 to Hyde’s 13.52 as both athletes battled a strong headwind (-3.8ms). In the process he moved his Champs head-to-head with Hyde to 4-0.

The Calabar captain was not done as he returned an hour later to spread-eagle the field in the 200m to win his third individual medal of Champs 2015. The icing on the cake was to come in the Class One sprint relay as Calabar with team leader O’Hara running his customary blazing second leg streaked away from Jamaica College to shatter their own 2014 Champs record stopping the clock at a mind-boggling 39.08. The other members of the record breaking team were Edward Clarke Jnr, Jullane Walker and Seanie Selvin on anchor. The Real Big Man of Champs had exorcised the demons of 2014.

Heir to the Throne shows his class

If O’Hara is king then Christopher Taylor is the undisputed Heir To The Throne. The 15 year old phenom fresh from his exploits in the 400m chased and collared team-mate and Class Three record holder Tyreke Wilson to win the 200m in a nippy 21.04 after his personal best 20.97 in the semi-finals. The King-In-Waiting then capped an amazing championship with a breathtaking anchor leg to fittingly lead his team to a scintillating 3.06.76 which obliterated the previous record set by St. Jago High.

St. Jago’s ace Class One sprinter Natalliah Whyte also crowned herself in glory with three gold medals on the final day to go with her 100m win on Friday. The 200m Youth Olympic Champion held off the early challenge of favourite Saqukine Cameron of Edwin Allen to win the 200m in 23.56 as Holmwood’s Sashalee Forbes closed well to nip Cameron for second. Whyte returned to anchor the St.Jago sprint relay team to victory in 44.39 and the mile relay team in 3.35.78 to cap an amazing Champs 2015.

Shellece Clarke of Edwin Allen and Kimone Shaw of St. Jago had two gold medals on the day to bring their Gold medal tally to three. Clarke completed the Class Two sprint double winning the 200m with Shaw having done so minutes earlier in the Class Three equivalent. Both were members of their team’s sprint relay gold medal runs with Clarke storming on the 3rd leg as her team sped to victory in a record 44.88, the first sub 45 for a Class Two team. Joanne Reid also completed the sprint double winning the 200m in 24.21 to eclipse the Class Four record set by Shaw in 2013 as St. Jago won three of the four 200m events on the day.Paketo Dudley of Jamaica College closed out a brilliant champs 2015 by winning the Class Two Triple Jump and anchoring his team to victory in the Class Two sprint relay. Dejour Russell joined the doubles club in emphatic style with a facile victory in the Class Two 110m hurdles. Rasheeda Downer of Kingston College won the Class Two Discus to go with his Gold medal in the Shot Put. Junelle Bromfield of STETHS won the Class Two 800m to add to her 1500m title.

The warrior princess, Lisa Buchanan of 10 time champions Holmwood closed out her high school Champs career in style winning the Class One 800m and the 3000m Open to go with her 1500m win on Friday. Aliesha Champagnie of St. Andrew Technical was the Iron Lady of Champs winning the Class One Shot Put with a record throw before returning to complete the golden haul in the gruelling 7-event Heptathlon. Champagnie also won the Javelin Open.

Demar Gayle of Edwin Allen also closed out his Champs career in Golden fashion winning the Class One Shot Put with a record-breaking throw. Holmwood’s Tamara Moncrieffe won the Class One Long Jump title to cap a fine championship after a disastrous opening day. The outgoing Holmwood senior won the Triple Jump on Friday.

Other winners on the day.

Manchester High put a dagger to the heart of the Kingston College title hopes by upsetting the ‘famed’ purples in the sprint medley. Edwin Allen won the girls equivalent and further sent a warning to all comers in 2016 as their Class Four team lowered the record they set in the heats with a blistering 46.65. St. Jago won the boys Class One and Two High Jump titles with Lushane Wilson equalling Christoff Bryan’s Class Two record. The 5000m Open went in impressive fashion to Holmwood’s Kajay Walker while STETH’s Paul Tate won the Class One 800m.
[column2]