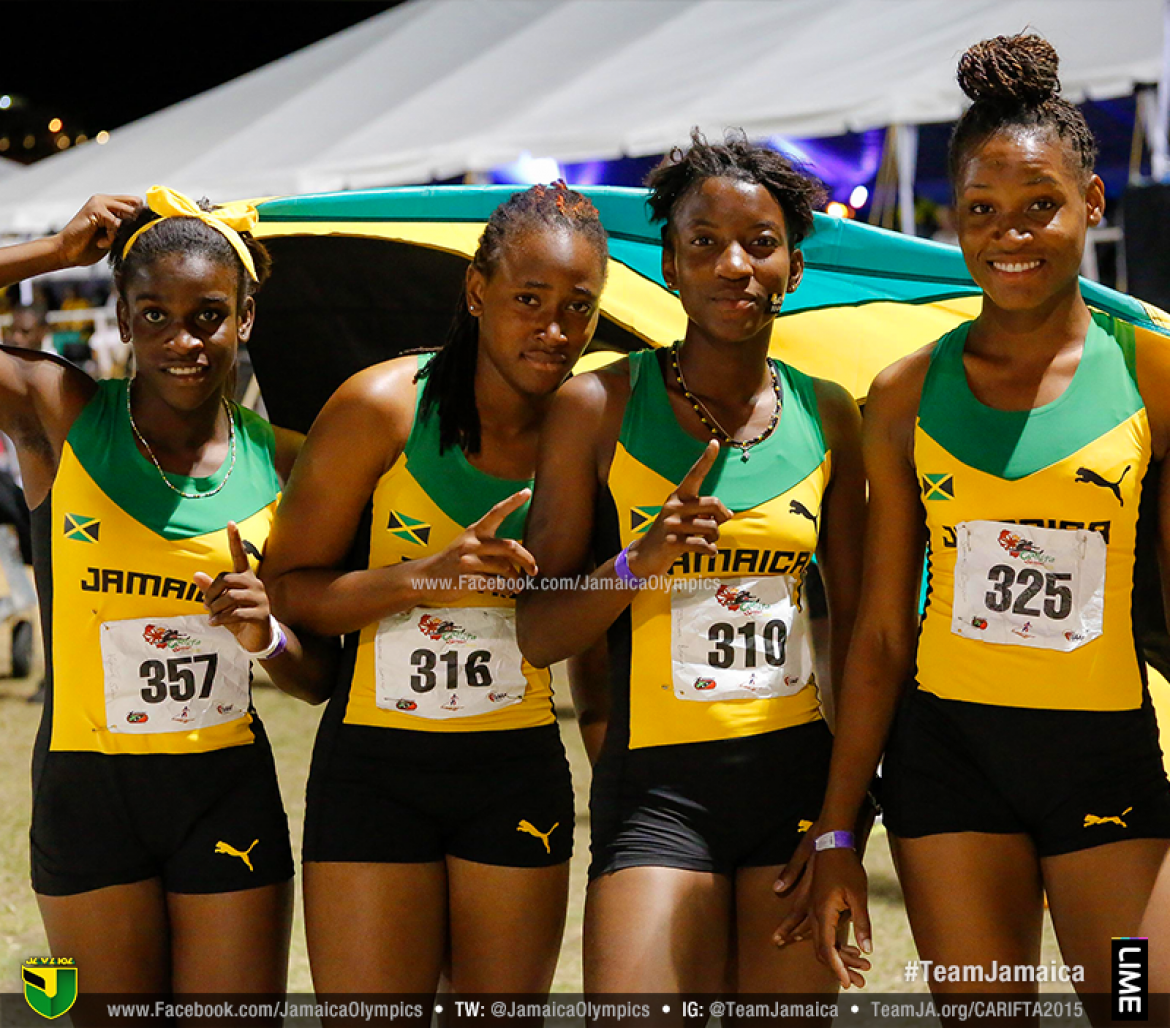 Team Jamaica began Day 3 of the 44th CARIFTA Games with 30 medals and were poised to significantly add to their ‘bling’. At the end of the penultimate day, the medal chest was beginning to bulge with 23 Gold, 12 Silver and 10 bronze for a total of 45 medals. This count does not include medals won in the Pole Vault and the 400m hurdles for the U18 and U20 girls as there were insufficient entries (each event must have at least 3 countries for results to be included in overall medal tally).

Head Coach of Jamaica’s team to the CARIFTA Games Orville Brown was in a buoyant mood at the end of proceedings on Day 3. ‘It was a pretty good day.The championships is going along quite well and we are looking forward to having a good day tomorrow’ said Brown In an exclusive interview with Jamaica Olympics.

Brown, while praising the efforts of all the athletes, singled out U18 Boys Javelin Silver medalist Kevin Nedrick for mention.

‘The most heart-warming performance for me was that of Kevin Nedrick and the Silver medal in the Javelin…..a very big personal best competing without adequate footwear and with a very short approach…he will go places providing adjustments are made…’said a beaming Brown, the pride obvious in his voice.

Shiann Salmon got the medal register clicking as she won the U18 Girls High Jump with a clearance of 1.73m with compatriot and defending champion Lamara Distin (1.68M) sharing the Bronze medal on count-back with Sakari Famous of Bermuda. Rochelle Fraser (14.06M) and Ayesha Champagnie (13.82M) were 4th and 5th respectively in the U20 Girls Shot Put. The event was won by Portious Warren of Trinidad and Tobago with a throw of 15.22M.

Kevin Nedrick secured the Silver medal in the U18 Boys Javelin throw and in the process attained the IAAF World Youth Championship (WYC) qualifying standard. Nedrick who won the Silver medal in the shot Put on Day 2 had a best throw of 65.09M, just above the 65.00M needed to qualify for the WYC in Cali, Columbia. The Gold medal went to the impressive Tyriq Hosford of Trinidad and Tobago with a CARIFTA Record 70.73M.

Jamaica’s Obrien Wasome (7.41M) beat all his rivals except Andwuelle Wright of Trinidad and Tobago and had to settle for the Silver medal in the U20 Boys Long Jump. His team-mate Odaine Lewis (7.20M) represented Team Jamaica well but finished outside the medal positions in 6th..

Pakito Dudley claimed the Bronze medal in the Boys U18 Triple Jump with a leap of 14.68M. Team-mate Lushane Wilson who won Gold in the High Jump finished 5th with a best jump of 13.62M. Bahamian Tamar Green won the Gold medal with a mark of 15.21m.

Another 1-2 for Bromfield and Walker

Junelle Bromfield (59.55) secured yet another Gold Medal and CARIFTA record for Jamaica as she scored a facile victory in the U18 Girls 400m hurdles. Bromfield’s who was winning her 2nd Gold medal of the games after her earlier success in the 400m broke the one year old record of 59.72 set by another Jamaican Shanice Cohen. Her team-mate Sanique Walker claimed her 2nd Silver medal chasing home Bromfield as she did in the 400m on Day 2.

Javauney James (53.18) is new to the event but made sure that Jamaica was on the podium for the U18 Boys 400m Hurdles. After being badly outpaced, James motored from 5th to second to gain the Silver medal but found the winner Rivaldo Leacock of Barbados in a different league. Leacock won easily in 51.34 while Jamaica’s Timor Barrett just failed to medal finishing 4th with a time of 53.55. The Bronze went to Aljani Bridgewater (53.44) of St. Kitts and Nevis.

Order restored – One Two, One Two in U20 Hurdles

World Junior Champion Jaheel Hyde and World Youth Champion Marvin Williams had a battle royal in the U20 Boys 400m hurdles with Hyde edging ahead in the final few metres to score a comfortable win in 50.96. Williams for the 2nd year running found one too good as he claimed the Silver medal in 51.11.

The grueling multi-discipline events which spanned three days of competition proved to be a happy hunting ground for Team Jamaica .National Junior Record Holder for the Decathlon Shakiel Chatoo was at his consistent best over all three days and was rewarded with Gold in the tough Octathlon Open. The slightly built Chatoo tallied 5,839 points to beat back the challenge of Remarcko Thompson of Barbados who finished with 5,639 points.

Ayesha Champagnie and Zinedine Russell made it yet another 1-2 finish for Area Code 876 in the Heptathlon Open. Champagnie started the day in pole position and did not relinquish her hold on the Gold medal despite the valiant attempt of team-mate Russell. The ‘Champs’ winner Champagnie allied 5,231 points for the top spot while Russell secured the Silver with
4,776 points.

Shanieke Watson may have been a bit fatigued after a rough campaign at ‘Champs’ and found herself badly outpaced in the Girls 3000m. She was unable to recover finishing 4th, well behind the winner Mary Fraser of Barbados. The Jamaica’s made up for it in the U18 Boys 3000m taking the top two positions. Keenan Lawrence who was 3rd in the 1500m secured the Gold in 8.55.64 with U18 Boys 1500m winner Shemar Salmon claiming Silver in 9.03.06.

Team Jamaica brought out the brooms in the sprint relays and made it a clean sweep.

The U18 Girls running in the order Janeek Brown – Shaneil English – Shellece Clarke – Kimone Shaw spread- eagled rivals to win by a city block or as Jamaicans would say ‘donkey lengths’. The fabulous four stopped the clock at 45.33 with Trinidad and Tobago looking like spectators almost two seconds behind. The Bronze went to Guadeloupe.

The team (in running order) of Xavier Angus, Tyreke Wilson, Rushane Edwards and the powerful Dejour Russell turned the U18 boys sprint relay into a procession and once the exchanges were safe it was just a matter of whether they could eclipse the 2014 record of 40.74 set by another high class Jamaican foursome. The quartet was for the most part smooth in their execution and all eyes shifted to the clock as Russell on anchor motored over the finish line in 40.52 smashing the old mark by over 2/10th of a second. Trinidad and Tobago won the battle for the Silver medal, almost a full second behind the imperious Jamaicans.

The U20 Girls propelled by a blistering third leg by relay ‘beast’ Saqukine Cameron easily disposed of the Bahamas and Trinidad and Tobago to win in a modest 45.20. Jeanine Williams and Yanique Thompson who will contest the U20 Girls 100m hurdles on the final day gave a good account of themselves on the opening two legs. Thompson handed over to Cameron who blitzed rivals on the third leg to place the baton in the safe hands of 100m champion Natalliah Whyte after which the result was never in doubt. Whyte ensured team Jamaica finished well ahead of the Bahamas (45.59) and Trinidad and Tobago (47.64).

The U20 Boys survived a late surge from the Bahamas to secure Gold in 40.39. Nigel Ellis on anchor looked to be faltering but held on from the fast closing Bahamian. Raheem Chambers handed off to Michael O’Hara who like a well oiled machine mowed down rivals to give Jamaica a good lead. Last year’s U18 200m champion Chad Walker maintained the lead on the third leg but the exchange between himself and Ellis was somewhat untidy causing the team to lose some momentum. The lead was however too much to overhaul and Bahamas had to settle for second in 40.41 ahead of Trinidad and Tobago 40.55.

Kimone Shaw and Shaneil English easily won their heats to advance to the final of the U18 Girls 200m. English, who was 3rd in the 100m was the fastest qualifier with a time of 23.88. Shaw, who won the 100m in 2014 took her heat in 24.19. The other top qualifier was Brianne Bethel of the Bahamas who won her heat in impressive fashion clocking a brisk 23.98, the 2nd fastest time going into tomorrow’s final.

Rushane Edwards and Xavier Angus ensured that Jamaica will have two finalists in the U18 Boys 200m with both finishing 2nd in their heats to easily advance, Angus (21.63) looked comfortable chasing 100m winner Javan Martin of the Bahamas who took the heat in 21.39. Edwards also looked the part recording 21.52 seconds to finish just behind Coull Graham of Antigua and Barbuda (21.46). The impressive Akanni Hislop of Trinidad and Tobago was the fastest qualifier winning his heat in 21.21.

Saqukine Cameron (23.47) easily booked her spot in the U20 finals after a comfortable win in her heat. Cameron has the fastest time going into the finals where she is expected to face stiff competition from the Bahamian pair of Jenae Ambrose and the towering Keianna Albury as well as the defending champion Kayelle Clarke of Trinidad and Tobago. Rene Medley did not face the starter.

Both Jamaican competitors in the U20 Boys 200m advanced to the finals after winning their heats. Chad Walker who won the U18 200m in 2014 completed his heat in 21.07 while Nigel Ellis (21.45) did enough in his heat to overhaul 100m champion Mario Burke of Barbados (21.56). Favourite Jonathon Farinha of Trinidad and Tobago looked silky smooth in taking his heat in 21.00.