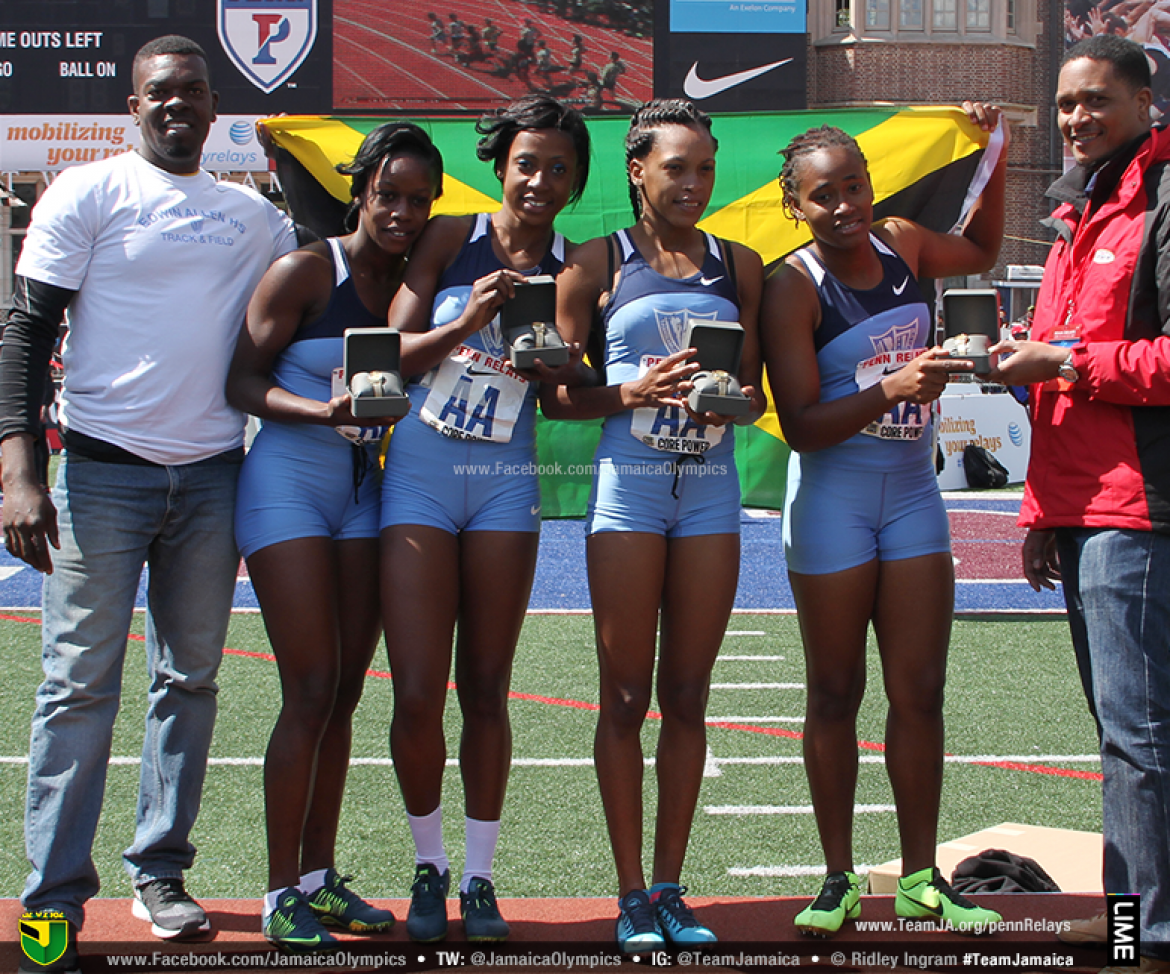 Saqukine Cameron is no ordinary athlete and place a baton in her hand and she meta-morphs into ‘beast mode’. Cameron displayed in no uncertain manner why she is one of the most feared relay runners at the high school level turning in two scintillating performances to pilot her team Edwin Allen High to repeat victories in the High School Girls’ Championship of America 4x100m and 4x400m events. Edwin Allen led a sweep of the top four places by Jamaican high schools in the 4x100m. The other members of the Edwin Allen team which won in a time of 45.40 were Aaliyah Hopkins, Patrice Moodie and Shellece Clarke on anchor. St. Jago High finished 2nd in 45.86 with Holmwood Technical High (45.94) and Wolmer’s Girls (46.63) rounding out a dominant display by Team Jamaica.

The brilliant Cameron and her band of blue warriors (Davia Smith, Janiel Moore and Shannon Kalawan) crowned themselves queens of the mile relay clocking a moderate 3.40.41 to comfortably turn back the challenge of nearest rivals Vere Technical High (3.42.18) and Nansemond River (3.43.03) who broke up Team Jamaica’s push for another sweep of the top four places. Holmwood Technical High (4th – 3.43.53) and St. Jago High (5th – 3.43.96) put in brave performances. Cameron for her amazing display in both relays was named the best female relay runner in the high school category receiving the Penn Relays Star Performer Award.

Holmwood Technical High was not to be outdone coming up trumps in the 4×800 High School Girls’ Championship of America final. The team of Shanieke Watson, Chrissani May, Britney Campbell and the ‘Warrior Queen’ Lisa Buchanan on anchor out-duelled rivals to win in 9.01.31. The other Team Jamaica representative Vere Technical finished 3rd in 9.13.06.

The much-hyped University of Technology (UTech Knights) team failed to show in the Championships of America 4x100m for College Women after injury to key member Christania Williams. Jamaican fans gathered in their numbers at the Franklin Field Stadium were eager to see the high-flying ‘Knights’ led by the red hot Elaine ‘Slimmaz’ Thompson and including the progressive Chanice Bonner and Shimayra Williams but were left disappointed. The event went in impressive fashion to Texas A&M University (43.76) who was winning for the 7th straight year. GC Foster College with a line-up of Gayon Evans, Kedisha Dallas, Audra Segree and Yanique Thompson finished 4th in 45.54.

Team Jamaica will have five representatives in the 4x100m High School Boys’ Championship of America final scheduled for Saturday. Kingston College with Akeem Bloomfield, Chadayne Walker, Twayne Crooks and Shivnarine Smalling was the fastest qualifier. The other teams from Area Code 876 to make the finals are the Michael O’Hara led Calabar High, St. Jago High with Raheem Chambers, St. George’s College and STETHS. The defending champion Jamaica College failed to advance to the final. They will run in the large school’s final along with Wolmer’s Boys’ while Papine High, Excelsior High, Munro College and Petersfield High will compete in the small school’s final.

The 4x800m High School Boys’ Championship of America final will see Team Jamaica  sending four schools to face the starter. Kingston College is the 5th fastest qualifier and will be accompanied in the finals by Holmwood Technical, Calabar High and STETHS.

There were no Team Jamaica winners in the individual events on Day 3. Frederick Dacres of the University of the West Indies finished 10th in the College Men’s Shot Put. Demar Gayle of Edwin Allen was the best placed Jamaican in the High School Boys’ equivalent with a mark of 20.26.  Warren Barrett of Calabar High (4th), Sanjae Lawrence of Petersfield High (6th), Vashon McCarthy of Jamaica College (7th) and Ceasar Kemp of Calabar High (10th) also competed  for Team Jamaica. Kino Dunkley of Munro College was 3rd in the High School Boys Discus.