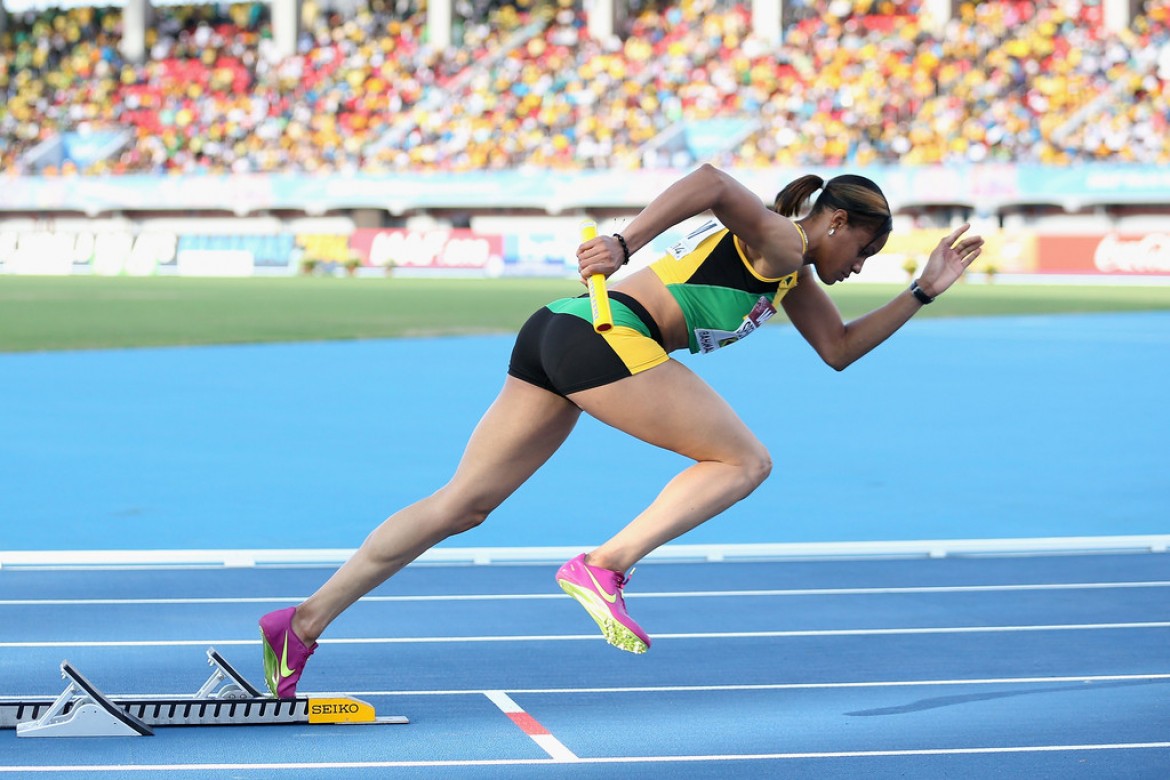 Many see the Women’s 4x100m as a match-up between Team Jamaica and perennial rivals the USA. On paper and based on recent history that view seems justified. Both teams have taken turns winning the event at global meets with Jamaica coming up trumps at the 2009 and 2013 IAAF World Championships and the USA calling the shots at the 2011 World Championships and the 2012 London Olympics where they set the World Record of 40.82. The USA also won the event at the inaugural World Relays.

The pool from which the Americans will select their runners includes the very experienced trio of Allyson Felix, Tianna Bartoletta and Carmelita Jeter, three members of the team that set the record in 2012. They will be joined by the likes of Jenebah Tarmoh, Jessica Young and Tiffany Townsend. The USA will start favourites to defend their title.

Team Jamaica will ensure that the USA will not have things easy. The Jamaicans have lost a key member as joint world leader over 100m, Elaine Thompson has been withdrawn from the team. The likes of the evergreen Veronica Campbell Brown, the experienced duo of Simone Facey and Kerron Stewart as well as Natasha Morrison will be keen to reverse last year’s placing.

Of the other teams, the one most likely to challenge the top two is Great Britain. The much-improved team from Great Britain twice lowered their national record in 2014 and the likes of Ashleigh Nelson, Asha Phillips, Bianca Williams and Jodie Williams could well be the fly in the ointment. France, Trinidad and Tobago with Kelly-Ann Baptiste and Michelle Lee Ahye, home team The Bahamas and Nigeria with Blessing Okagbare will also be looking to make a statement.

The 4x200m for women barring the unforseen, should come down to a battle royal between USA and Jamaica. Three of the four women who led the USA to Gold in 2014 return as part of the squad which will be going all out to retain its title. Shalonda Solomon, Tawanna Meadows and Kimberlyn Duncan will be joined by 17 year old World Junior 200m Champion, Kaylin Whitney, Candyce McGrone and Charonda Williams.


[/column2_last]
A Jamaican team of Veronica Campbell Brown, Shelly-Ann Fraser-Pryce, Schillonie Calvert and a rejuvenated Sherone Simpson will not be satisfied with anything less than a win after the bronze medal at last year’s meet. Fraser-Pryce is the only returning member of that team. Last year The Bahamas finished 4th but returns this year with a better team which includes three former World Junior Champions – Anthonique Strachan, Shaunae Miller and Sheniqua Ferguson. Great Britain will not be defending their Silver medal position.

It will take a brave person to oppose the USA in the 4x400m. The USA Women have not lost a major outdoor mile relay final in eons and the team of Sanya Richards-Ross, Francena McCorory, Dee Dee Trotter and Natasha Hastings are not only favourites to win but should easily surpass the 3.21.73 that they ran to win the event in 2014. McCorory who was absent from last year’s winning team is the 2015 World Leader in the 400m.

Anastasia Le-Roy (L) of Jamaica leads Sanya Richards-Ross of the United States as they compete in the Women’s 4×400 metres relay during day one of the IAAF World Relays at the Thomas Robinson Stadium on May 24, 2014 in Nassau, Bahamas. (May 23, 2014 – Source: Christian Petersen/Getty Images North America)

The biggest and perhaps only threat to the all powerful Americans should be Team Jamaica. The squad has been weakened by the withdrawal of the talented duo of Shericka Jackson and Janieve Russell but will have the solid pair of Stephenie McPherson and Novlene Williams-Mills, Gold and Silver Medalists from the 2014 Commonwealth Games spear-heading the charge. Patricia Hall and Anastascia Le-Roy are very experienced and will be buoyed somewhat after being a part of the team that easily won at the Penn Relays.

The Jamaicans will be looking to better their time from last year when the 4x800m team set a national record. Natoya Goule, Simoya Campbell, Kimarra McDonald and Samantha James should gain a lot from competing at that high level. The Kenyans are expected to turn the tables on the USA who scored a massive upset when winning in 2014.

Shalonda Solomon, Tawanna Meadows and Kimberlyn Duncan will be hoping that the addition of world junior 200m champion Kaylin Whitney, still only 17, will help them improve on their winning time of 1:29.45 from 2014. 2011 NCAA 100m champion Candyce McGrone and 2012 Diamond Race winner Charonda Williams are also on the US squad.