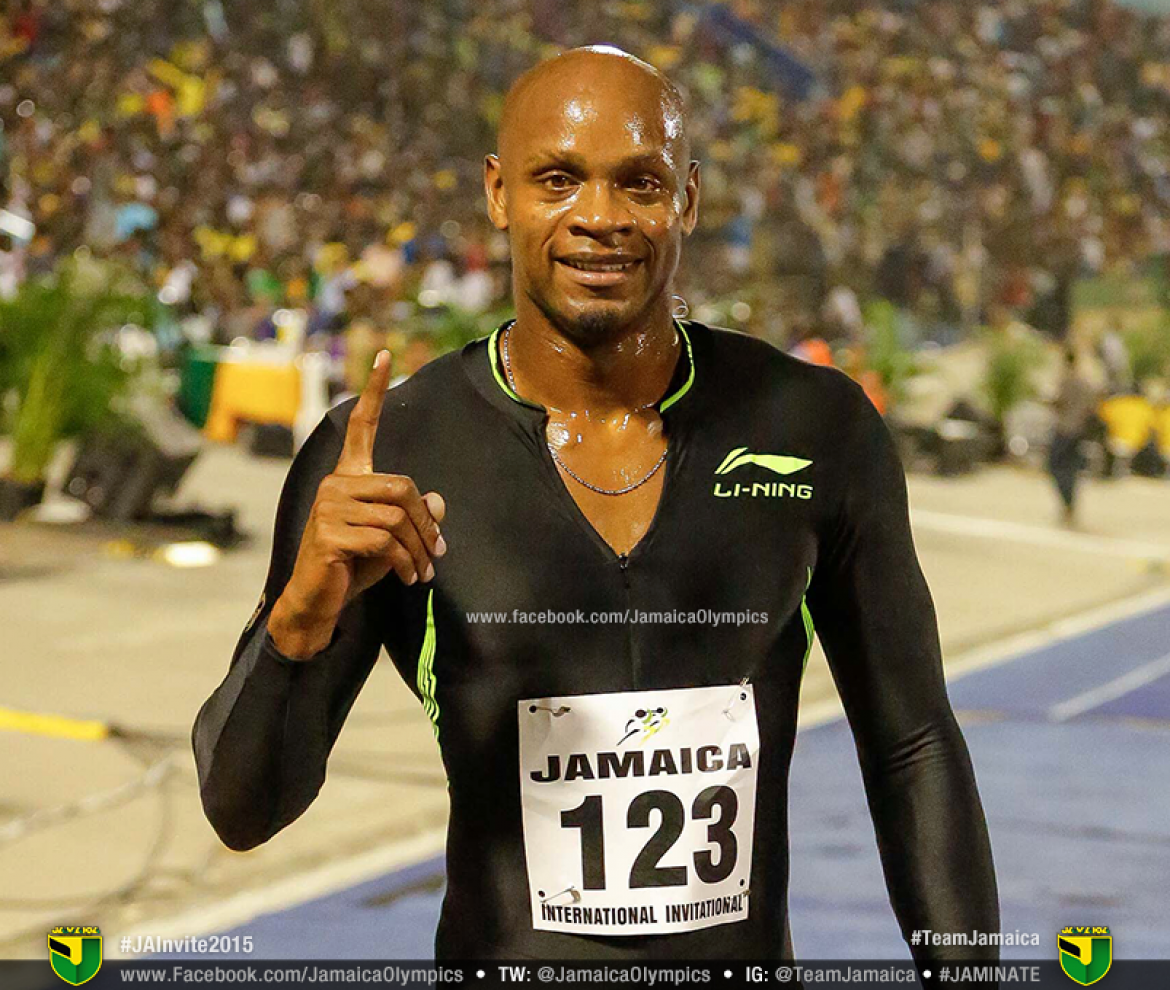 The crowd turned up in their numbers and was treated to an evening of world class action by the plethora of stars on display at the 12th staging of the Jamaica International Invitational now a staple on the IAAF World Challenege Meet Calendar. Every event delivered as expected with 5 world leading marks, one world lead equaling run and several other statement performances.

Elaine ‘Slimmaz’ Thompson looked very nervous before the start of the 100m and one could understand why. The joint world leader was up against some international hot-steppers including double Commonwealth Games Sprint Champion and 2013 World Championship Bronze medalist Blessing Okagbare of Nigeria and 2012 Olympic finalist over the 100m and Olympic champion over 200m Allyson Felix of the USA.

Asafa back with a bang as Ryan Bailey receives ‘warm’ welcome

The highly anticipated men’s 100m delivered in every sense. Ryan Bailey as expected got one of the loudest boos ever meted out to an international athlete but to his credit did not appear intimidated. Former world record holder and one of Jamaica’s most loved athletes Asafa Powell was making his first appearance at the National Stadium in two years and received his usual king’s welcome.

Powell and Bailey were not the best away as Andrew Fisher as he did in the 2014 edition, got off to another bullet start with Nesta Carter not far behind. Powell coming off an impressive 10.08 clocking a week ago was masterful in his execution over the final 40m, catching up with the leaders before pulling off for a comfortable win, showing the high knee-lift that was a trademark during his days of dominance on the circuit.

The 2009 World Championship Bronze medalist and self-styled ‘Sub10 King’ stopped the clock at an impressive 9.84 (1.8 m/s) igniting the thousands in attendance into a frenzied cheer and with shouts of ‘Asafa is back’ from his multitudes of adoring fans.

Bailey (9.93) showed that his mettle in a hostile environment, soaking up the pre race boos to out-finish Nesta Carter (9.98) for second. It was the first time this season that the sub 10 barrier was breached within wind legal limits. The race also produced personal bests for Fisher (10.01) for 4th and Tyquendo Tracey (10.20) for 7th, both members of UTech’s crack sprint relay team. Another member Kemarley Brown did not finish, Richard Thompson (10.04) was 5th while Daniel Bailey finished 6th in a season’s best 10.11.

Bahamian Shaunae Miller has been burning up the track over 200m and 400m all season and many were keen to see what she would deliver against a strong field including defending world champion Shelly-Ann Fraser-Pryce and one of the breakout stars of 2014, Torie Bowie.

In perhaps the performance of the meet, the tall, far striding and elegant Bahamian wore down a fighting Fraser-Pryce and Bowie who were having an epic battle to win in a Personal Best and world-leading 22.14. In the process Miller, who won titles at the World Youth and Junior levels over 400m, shattered the previous Bahamas National Record of 22.19 set by Debbie Ferguson in 1999.

The much hyped Women’s 400m did not produce the close finish expected but produced an impressive and ominous display by reigning Olympic Champion Sanya Richards-Ross of the USA. The Jamaican-born Richards-Ross challenged long time leader Francena McCorory also of the USA early in the straight before pulling off for a smooth and emphatic win in a world leading 49.95. It was her 4th win in the event but first since 2008.

One of the performances of the meet was that of new sprint hurdles sensation Jasmin Stowers of the USA who ran another eye popping world leading time of 12.39 (2.00 m/s) to easily win the 100m hurdles. Stowers whose hurdling technique is far from text-book showed her rivals a clean pair of heels to lower the 12.40 world lead she set a few weeks ago at the Drakes Relays.

Former national champion Danielle Williams (12.77 SB) ran very well for second to finish ahead of her older sibling Shermaine Williams (12.89 SB). The diminutive Megan Simmonds had a rough race but clocked a respectable 13.03 in her first real test against top class competition this season.

Javon Francis didn’t win the Men’s 400m but the characteristic smile after the race might have had many thinking otherwise. The 20 year old former Calabar High standout, fresh off two scintillating anchor leg runs at the IAAF World Relays a week ago turned in another of his brilliant displays to finally dip below the 45 seconds barrier.

‘Donkey Man’ as Francis is affectionately called by his growing fan base did not appear to run the best technical race but came off the turn for home in the lead which he held in deep stretch before being passed by the smooth looking Asian record holder Yousef Al-Masrahi. The Saudia Arabian won going away in a season’s best 44.59. Defending world champion Lashawn Merritt (44.80 SB) found extra to outfinish Francis (44.90 PB).

Francis who has demonstrated time after time that he has the heart of a lion is now the fastest Jamaican in 2015. Belgian record holder Jonathan Borlee (45.06 SB), Isaac Makwala (45.10 SB) of Botswana and Francis’ World Relays team-mate Rusheen McDonald (45.38 SB) rounded out the top 6.

Aleec Harris, another in the long line of American sprint hurdlers came to the Jamaica Invitational with the world leading time and many were expecting a keen tustle between the 24 year old American and national record holder Hansle Parchment.

The slow starting Parchment (13.47) appeared to be making a fight of it mid way the event but lost his momentum to finish 4th as the light stepping and efficient Harris equaled his world lead of 13.16 (1.0m/s). American Jeff Porter was 2nd in 13.36 with Mikel Thomas of Trinidad and Tobago 3rd in 13.44.

The American dominance in the hurdles was also manifested over the 400m hurdles with the duo of Bershawn Jackson and Kori Carter recording good wins. Jackson who has made an unbeaten start to the season never looked in danger of defeat as he won comfortably in 48.47 ahead of many time Jamaican national champion Leford Green (49.22) and Jeffrey Gibson of the Bahamas 49.42.

Carter had to work much harder to win the women’s equivalent overhauling long-time leader, the 2014 Commonwealth Games Bronze medalist Janieve Russell close home for a narrow but decisive win. Carter 55.12 got the better of the very promising Russell (55.29 SB) with 3rd going to the battling American veteran Tiffany Williams (55.35).

The men’s 200m did not produce a super fast time but the race delivered on excitement with the closest finish of the evening. Nickel Ashmeade in the opinion of many, does not get the recognition he deserves and the former St. Jago High star is on a mission in 2015 to change that. Ashmeade (20.25/+0.7 m/s) showed his battling qualities to beat 2014 National and Commonwealth Games Champion Rasheed Dwyer (20.28), Aaron Brown (20.30) and Julian Forte (20.39).

The field events produced some very good displays. World Champion and the undisputed number one in the Women’s Triple Jump, Caterine Ibarguen of Colombia sent a message to rivals with a leap of 14.87M, the biggest jump ever on Jamaican soil. Her Colombian team-mate Yosiri Urrutia (13.81M) was a distant second.

In the men’s Discus, Vikas Gowda of India kept his 2015 unbeaten streak going with a clear victory. Gowda (65.14M) was over three metres clear of his nearest rival, Chad Wight of Jamaica who had a best throw of 61.84M. In the very competitive men’s Shot Put which featured a few world champions, Christian Cantwell (21.08M) led an American clean sweep of the podium finish with Cory Martin (20.74M) finishing 2nd and Ryan Whiting (20.54) getting 3rd. The 2014 Commonwealth Games Champion O’Dayne Richards (20.48M) was 4th.

Three competitors recorded throws over 59M in the women’s Discus. Jade Lally of Great Britain won with a best mark of 59.90M ahead of Liz Podominick of the USA (59.50M) with yet another American Whitney Ashley (59.04M) closing out the podium finish. The Pole Vault which saw an all American line-up was won by Brad Walker with a clearance of 5.60M. Doreen Amata (1.90M) of Nigeria won the Women’s High Jump on count-back over Levern Spencer.

The middle and long distance races provided little drama with the winners not facing any serious challenges. The 3000M Steeplechase for women went in easy fashion to Bridget Franek (9.46.34 SB) as Americans swept the top three places. The Men’s 3000M went to Juan Luis Barrios of Mexico in 7.59.92.

The talented 20 year old Ajee Wilson scored a facile win in the Women’s 800M. Wilson just failed to break the sub 2 minute mark finishing in 2.00.65 as Americans copped the first three spots. Jamaica’s Kimmara McDonald ran a decent race to finish 6th in 2.02.44 while compatriot Simoya Campbell fell not long after the start of the two lap event.

The development races which preceded the International segment of the meet saw Shericka Jackson (51.42) winning the 400m with consummate ease. Winston Barnes, a training partner of Asafa Powell won the 100m in 10.33.