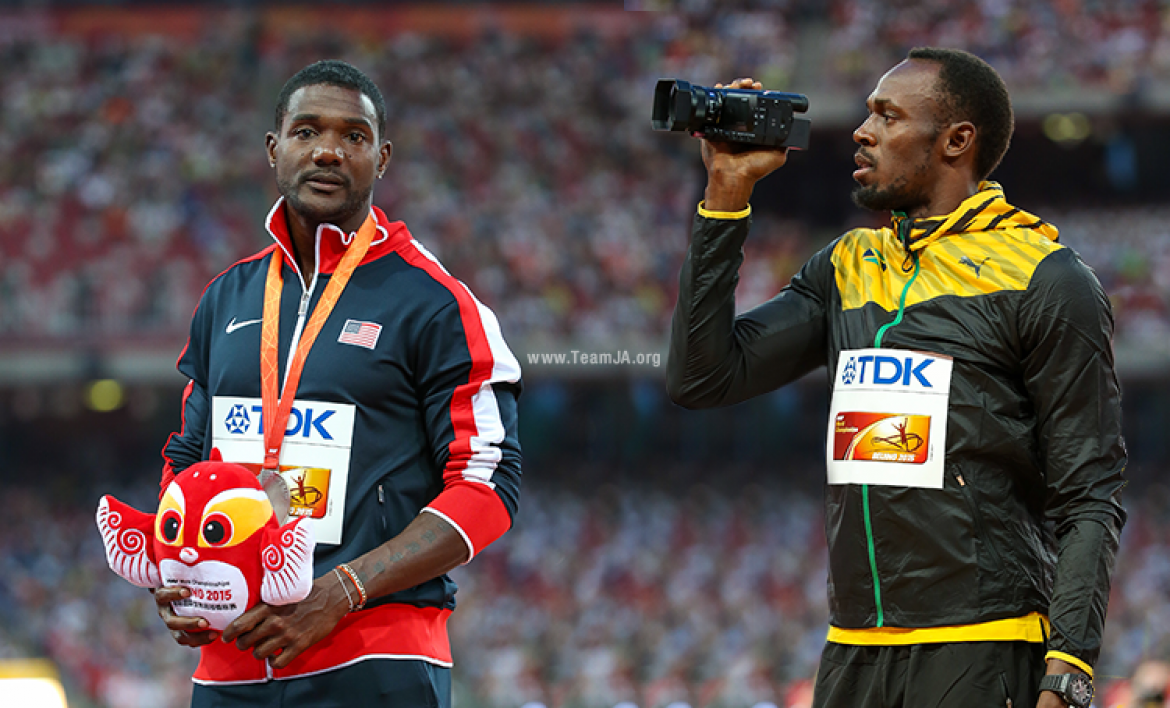 “…the 200m is my favourite event. I am coming out to win as always…..Not gonna let Gatlin beat me…that’s for sure,” said the 9-time World Championship Gold Medalist.

Daggers are drawn. The world awaits Bolt vs Gatlin…the rematch. Not as hyped as their 100m showdown but the stakes are just as high. The post 100m final rhetoric from the main protagonists have whetted the appetite for much more. Perhaps this time Ato Boldon will spare himself ‘the Donkey of the Day’ tag by not giving the Gold to Gatlin before the race is run.

Justin Gatlin has once again thrown down a challenge to world record holder Usain Bolt, the man who humbled him in the epic 100m finals on Day 2 of the Championships. As it was in that event, the much demonized Gatlin will go into the final with the fastest time, building on his 19.58 seconds world lead.

The American who won the 200m title in 2005 at the World Championships in Helsinki, scorched the track with an impressive 19.87 seconds. He is on a mission. He may never be accepted in the good graces of track and field fans or the world governing body, the IAAF but it is clear that Gatlin does not care. His sole purpose, as it has been for years, is to defeat and emphatically so, the man who wears the crown of the undisputed king of track and field.

He holds dearly to the view that he handed Bolt the 100m title by losing form close home. In true Gatlin style, he has been talking up a storm, enabled by those in his inner circle and motivated by the venom that spews in the public domain. He wants to sock it to the media and particularly so, the British media who have made no secret of their utter dislike for the man they see as a career ‘cheat’ and one who should not be near a track much less competing for the Gold at track and field’s showpiece event.

Bolt, who is seeking to add to his considerable legacy as the GREATEST OF ALL TIME, has his sights set on an unprecedented 4th consecutive World Championship title after wins in Berlin, Daegu and Moscow. The Jamaican has not lost a Global 200m title since finishing 2nd to Tyson Gay at the 2007 Games in Osaka, Japan, a span which also includes back to back Olympic titles. The 200m is his favourite event, perhaps because that is where he first captured the imagination of the world by winning the title at the World Junior Championships on home soil almost a decade and a half ago.

Not one to get caught up in the chatter, the 29 year old Bolt has this time around sounded a warning to all comers and particularly to Justin Gatlin. In an interview with a local media group, he was very direct and did not mince words. “…the 200m is my favourite event. I am coming out to win as always…..Not gonna let Gatlin beat me…that’s for sure,” said the 9-time World Championship Gold Medalist.

He may not have been focusing on sending any messages but that is exactly what he did in the semi-finals. He cruised in to win his semi-final in a smooth-looking 19.95 seconds, his fastest time this season. Gatlin is a brave warrior who has nothing to lose… perhaps very little to gain as well, given his unenviable, some might say unfair status as track and field’s social pariah. He would be a fool not to have taken serious note of the run by the defending champion.

The 200m is being hyped as a grudge rematch between the seemingly unstoppable Bolt and the hurting Gatlin whose run of 28 straight wins over 100m and 200m was brought to a crashing end on the grandest stage by track and field’s biggest draw card. There are 8 lanes and six athletes outside of the ‘Big 2’ and none sees himself as an extra in the sequel to Sunday’s 100m blockbuster.

The supporting cast includes Bolt’s team-mate Nickel Ashmeade, who defied the odds and calls in certain quarters for him to be replaced by world number 2 Rasheed Dwyer to make his 3rd straight world championship final. Ashmeade was 2nd in his heat to the man tipped by many as the Bronze medal favourite, Zharnel Hughes of Great Britain who incidentally is a training partner of Bolt at the Racers Track Club.

Another strong medal contender is Alonso Edward of Panama, the Silver medalist from the Berlin World Championships where the majestic Bolt won in a mind boggling 19.19 seconds. The field is completed by Femi Ogunode of Qatar, Anaso Jobodwanda of South Africa and Ramil Guliyev of Turkey.