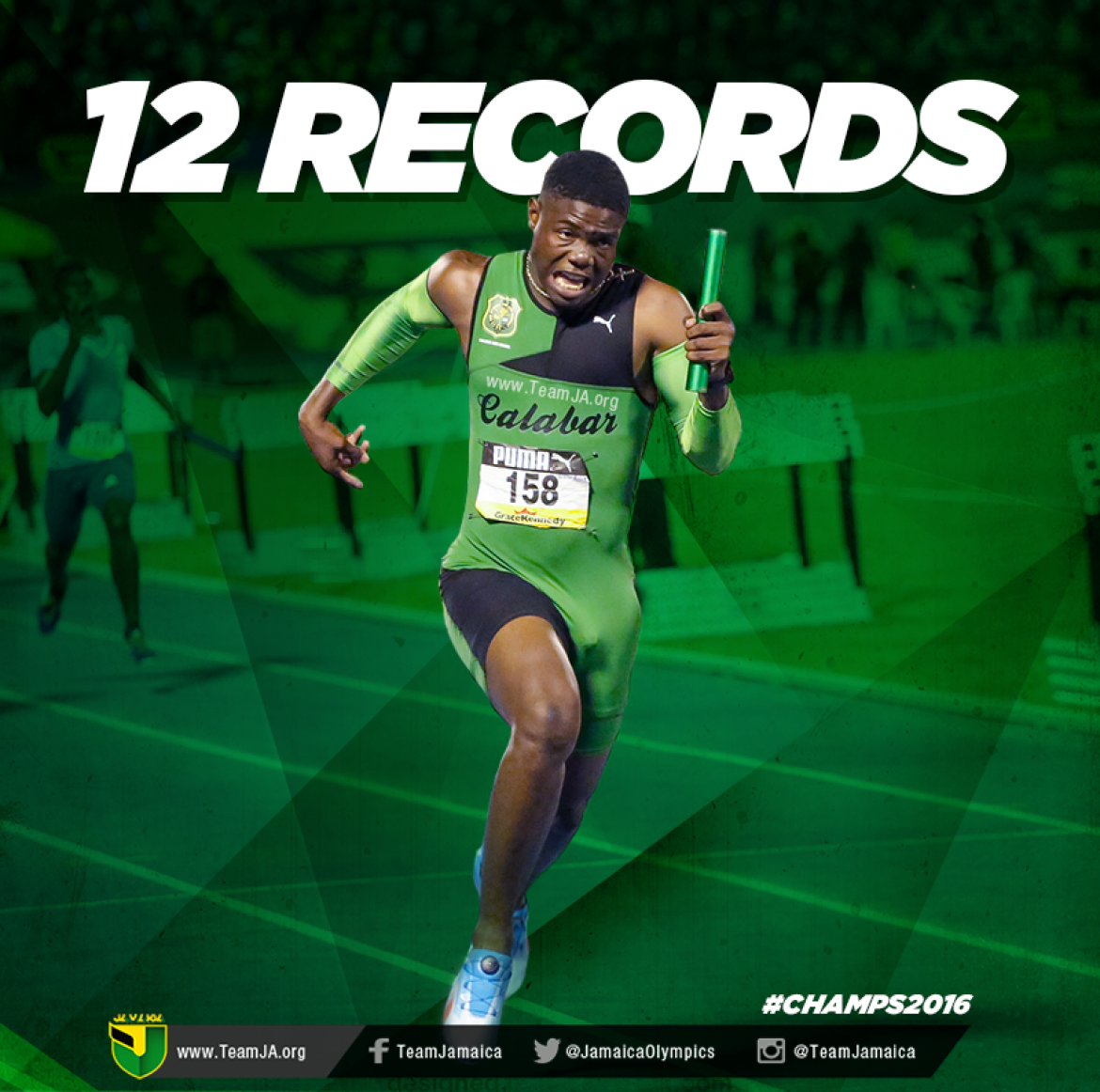 The record-breaking class of 2016 came, saw and conquered leaving their marks on what was another magnificent staging of the ISSA/Grace Kennedy Boys and Girls Track and Field Championships, widely recognized as the premier meet of its kind in the world.

There were 12 records over the five days of intense, exciting, nail-biting, grueling and show-stopping competition. The boys were responsible for eight of the twelve records to fall with the girls accounting for the other four. One record was equaled and another broken twice in one event. There was at least one record on each of the five days and one super athlete left ‘Champs’ 2016 with an amazing three records. The honor roll of the 106th edition makes impressive reading.

Calabar High’s phenom Christopher Taylor was first to enroll in the hallowed halls of the 2016 Class of Record Breakers. The 16 year old Taylor was widely expected to break the record on the opening day in the heats as he did the Class Three record in 2014 and duly obliged, running 46.33 to shatter Devaughn Baker’s 2013 mark of 46.64.

The 2015 IAAF World Youth Champion over 400m returned on Day 2 to show his sublime versatility over the half lap. In his now customary fashion of erasing marks in the heats, Taylor ensured that the 2007 Class Two 200m record of 20.89 set by Ramone McKenzie also of Calabar High, did not survive a tenth year. He stopped the clock at 20.80.

Taylor claimed his 3rd record of the championships on Day 5 with a brilliant run on the back stretch as champions Calabar High School smashed the 2013 mark of 40.54 to win the Class Two 4x100m relay in 40.29. The other members of the record-breaking quartet were Tyreke Wilson, Michael Stephens and Dejour Russell.

The Boys Class One Triple Jump final was as dramatic as the 2015 equivalent. In 2015 Clayton Brown broke Clive Pullen’s record, however could only manage second as his team-mate Obrien ‘Awesome’ Wasome won with a wind-aided 16.24m. Fast forward 2016 and Calabar’s Javier Lowe eclipsed Brown’s 16.04m with a new mark of 16.10m in the 3rd round. That record lasted just a few minutes as Wasome of Jamaica College cut the sand at 16.39m in the same round 3 to etch his name in the record books in his final year at ‘Champs’.

Keenan ‘Smooth Traveller’ Lawrence was in a mean mood in the 1500m. The affable Lawrence who has endeared himself to track and field fans with his polite ‘Miss’ and ‘Sir’ responses in post race interviews ever since he came to prominence a few years ago, won the event in 3.57.28 to erase the nine year old record of 3.58.06 set by Kemoy Campbell.

Thaleetio Green ensured that St. Jago High had another record to celebrate and he did so in emphatic fashion. He closed Day 2 of the championship by winning the 2000m Steeple Chase Open in 5.53.14 as the top three finishers all went under the old mark.The gangling but very strong Green decimated Obrian Frith’s 2014 mark of 5.59.70 by over six seconds.

The second field events record among the boys came via the outstanding Daniel Cope of Petersfield High in the preliminaries of the Class Two Discus. Cope who won the Shot Put title as well threw the disc 53.41M to better Kino Dunkley’s 2013 mark of 52.09m.

The girls who made the honor roll were no less impressive despite fewer records. Kimone Shaw was among the record breakers during ‘Super Champs 2013’ when she set the Class Four 100m record. The speedster from the Monk Street based St. Jago High School crushed a strong field to win the Class
Two 100m finals in 11.40 (0.8 m/s) to erase Jura Levy’s 2008 reord of 11.46 seconds.

Shanice Love, despite her impressive showing as a junior for Jamaica, had never won a Gold medal at ‘Champs’. 2016 would be her final year and the Excelsior High athlete was determined to script her own Champs ‘Love’ Story and did so in dramatic fashion. Two foul throws to start and a record final
round throw of 52.73 to smash Tara Sue Barnett’s 2013 record of 51.16M in the Class One Discus final.

Janell Fullerton marked her first year competing for St. Jago High School with a massive throw of 14.46m to win the Class One Shot Put Title. The former Edwin Allen standout removed the one year mark of 14.27m set by Ayesha Champagnie from the record books.

Britany Anderson of many time champions Vere Technical High School also etched her name in the record books. The versatile Class Three athlete who also did the 200m and the Long Jump at Champs 2016, executed well on her way to 11.10 seconds to surpass Rushelle Burton’s 2013 record of 11.13.

Honorable mention goes out to the Calabar High powerhouse Dejour Russell. The 15 year old added to his ‘Champs’ haul of gold medals with a scintillating run to win the 110m Hurdles for Class Two athletes. Russell gave a hint of what was to come by pointing to the watch on his hand several times, indicating that he was going after the record. When the stadium clock flashed 13.42 moments later it appeared that he had broken Michael O’Hara’s 2013 record of 13.45 seconds. The time was eventually rounded down to 13.45 (-3.2 m/s) giving the burly sprinter a share of the record.