World Relays – 4 Days to go – A look at Team Jamaica 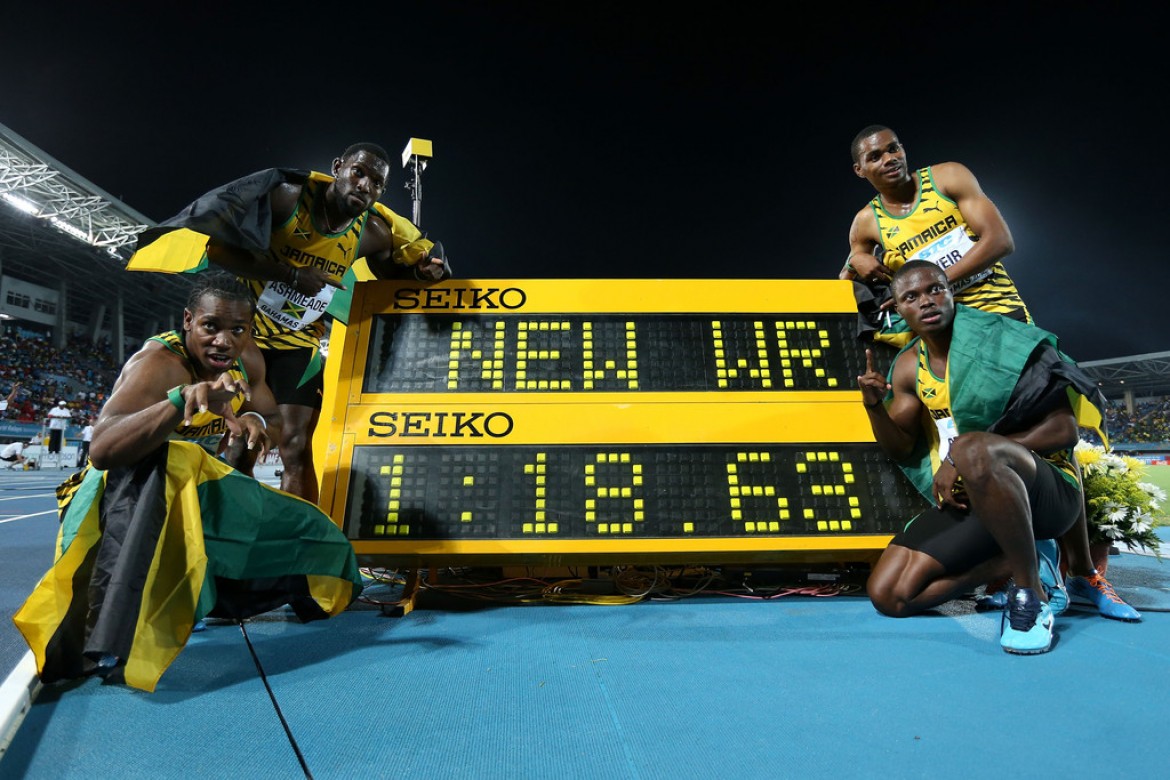 Team Jamaica finished 2nd to the mighty USA in the race for the Golden Baton at the inaugural staging of the IAAF World Relays in The Bahamas in 2014 and will be looking wrest the coveted ‘baton’ from the grasp of their biggest rivals. The USA fielded teams in all five events across both genders while Jamaica had full teams in three events and a women’s team in the next. For the second edition the 4x1500m relays have been replaced by two distance medleys with the USA set to participate in all events. Jamaica will not field a team in the medleys but will have both men and women participating in the 4x100m, the 4x200m, the 4x400m and the 4x800m.

A squad of 44 athletes featuring a mix of some of the biggest stars in athletics along with some emerging talent was named by the Jamaica Administrative Athletics Association to represent the island at the IAAF/BTC World Relays, Bahamas 2015 to be staged in Nassau from Saturday May 2-3.

Teams from the participating countries will have the chance at qualification for the Rio 2016 Olympic Games with the top eight teams in the 4x100m and the 4x400m automatically qualifying. Another incentive will be the prize monies. The top eight teams in each of the five relays will be awarded prize money with the gold medalists pocketing no less than USD 50,000 and an additional USD 50,000 for a World Record.

Triple world champions Usain Bolt and Shelly-Ann Fraser-Pryce head a fairly strong team. Big name absentees from the team are multiple Diamond League winner Kaliese Spencer, Yohan Blake who ran two scintillating anchor legs for the 4x100m and 4x200m which Jamaica won, the latter in World Record time and Intercollegiate standout Remona Burchell who many see as one of the emerging stars in world athletics. Blake is still recovering from season ending injuries in 2014 while it is not clear whether Burchell and Spencer were invited.

Bolt is eager to deliver on perhaps the only stage left for him to conquer following his injury enforced absence from the inaugural event. Fraser-Pryce on the other hand will be seeking to inspire her team to success following a below par performance which saw the Jamaican women drawing a blank in all three match-ups with perennial rivals, the USA in 2014.

Veronica Campbell-Brown, the much decorated World and Olympic Champion was also named to the squad and is expected to deliver her characteristic classy performance after missing out in 2014. Also making a return will be the rejuvenated Sherone Simpson who appears to have found a new lease on life after issues on and off the track. Kerron Stewart has looked a bit below par so far this season but is the consummate team player and usually delivers on the big stage. Rising star and joint world leader over 100m, Elaine ‘Slimmaz’ Thompson is also expected to be a key member of the sprint relay teams.


[/column2_last]
Other members of the team from which the sprint relays participants will be chosen are the reliable Schillonie Calvert, the experienced pair of Samantha Henry-Robinson and Simone Facey as well as the promising duo of Natasha Morrison and Christania Williams providing the latter recovers from an injury which prevented her from running in the finals of the 4x100m at the recent Penn Relays.

The women’s mile relay team is perhaps at its strongest in many years and looks the team best equipped to carry the fight to the imperious Americans who have not lost a world title in many years. The team without Novlene Williams-Mills ran a world leading time at the Penn relays in what was a test run. That quartet included Christine Day, Anastasia Le-Roy and Stephenie McPherson, members of the team which won the Gold Medal at the 2014 Commonwealth Games. They will be joined by the much improved Janieve Russell, Olympic and World Championships Silver Medalist Shericka Williams and the silky smooth and versatile Shericka Jackson who was a member of the team that won the Silver Medal at the first edition of the World Relays.

Team Jamaica will get a second bite at showing that we have an improving 800m program with the women again taking on the world’s best in the 4x800m. They will be massive under-dogs in this event and the minimum expectation is a national record. Former Holmwood Technical High star Chris-Ann Gordon was not named to the squad this time around. National 800m champion Natoya Goule will lead a young inexperienced squad which includes first time invitees Samantha James and Kimmara McDonald as well as Jamaican Intercollegiate champion Simoya Campbell who made her senior team debut in the event at last year’s first staging.