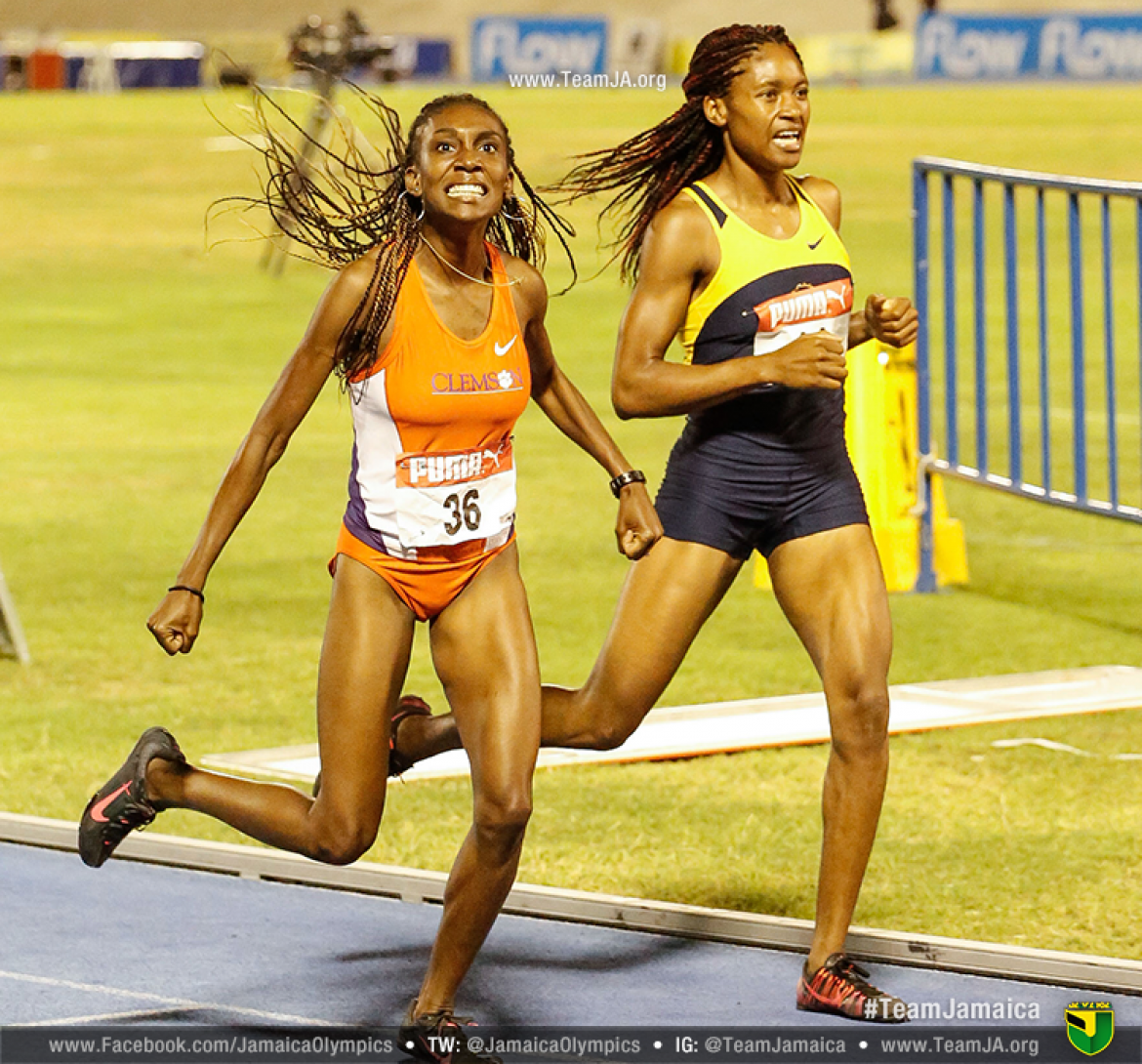 The look on Natoya Goule’s face as she glanced across at the clock told the story. Simoya Campbell’s already infectious smile got much wider. The future of Jamaican 800m which has been promising so much since Goule stepped up as heir to long-time stalwart and National Record Holder Kenia Sinclair was finally here.

The National Stadium came alive as the darlings of Jamaica’s female middle distance program made their intentions clear from the outset. The smaller Goule set out in the only way she knows – from the front and on cue the elegant striding Campbell ensured she kept close. The two raced as a pair to cover the first 400m in just over 57 seconds.

All eyes were on the clock as the knowledgeable cheering supporters in the National Stadium Grand Stand and those with viewing access elsewhere willed on the duo as well as Kimarra McDonald in third knowing that something very special was about to unfold. With less that 300m to go, the more seasoned Goule accelerated and Campbell with her #MissionBeijing and coach’s advise ringing in her ears knew she had to follow suit and that she did.

McDonald tried desperately to close but was unable to do so fast enough. Goule and Campbell came into the homestretch and the willing crowd continued to cheer them on. It was joy unconfined as the former Manchester High and ‘Champs’ standout punched the air in jubilation as she crossed the line knowing she had done it.

Campbell, a triple Gold Medal winner at the 2015 Jamaica Inter Collegiate Championships and herself a ‘Champs’ standout for Spalding High glanced nervously at the clock but knew that she had done something special given the margin between herself and the winner.

“I will finally have someone to warm up with in training”, a beaming Natoya Goule told the interviewer a few minutes after the duos brilliant display in the 800m which saw her and the runner up Simoya Campbell not only attain the qualifying standard but also set big personal bests. Goule, the defending champion won the event in 1.59.63 to surpass the 1.59.93 she set two years ago at ‘Trials’ when qualifying for the Moscow Games.


[/column2_last]
The affable and determined Campbell turned in a very good performance to finish second in 1.59.92 almost 2 seconds faster than the 2.01.59 she ran on May 23 when finishing 3rd at the Ponce Grand Prix Meeting in Puerto Rico. The 21 year old is not content with just qualifying. Her Facebook post a few hours after the race indicates that she knows there is the scope for much more.

“To God be the Glory great things he has done. On my way to Beijing China, a new PB for me and my hard work all year is starting to pay off hopefully I can keep dropping some more seconds off and finish off the season in style. Thanks for your love and support! I really appreciate it!” – Simoya Campbell.

The only disappointment for the two young ladies was that they were unable to pull McDonald, a member of the 4x800m team to the 2015 World Relays in the Bahamas, to the qualifying mark of 2.01.00. It would have been truly remarkable if all three ladies had been able to eclipse the qualifying mark and especially in front of their home crowd.

It was a bittersweet moment for McDonald who though failing to attain the Beijing qualifying mark, ran a personal best 2.02.08 in finishing a gallant third. The 27 year old will be hoping to take advantage of one or two more opportunities to meet the standard.