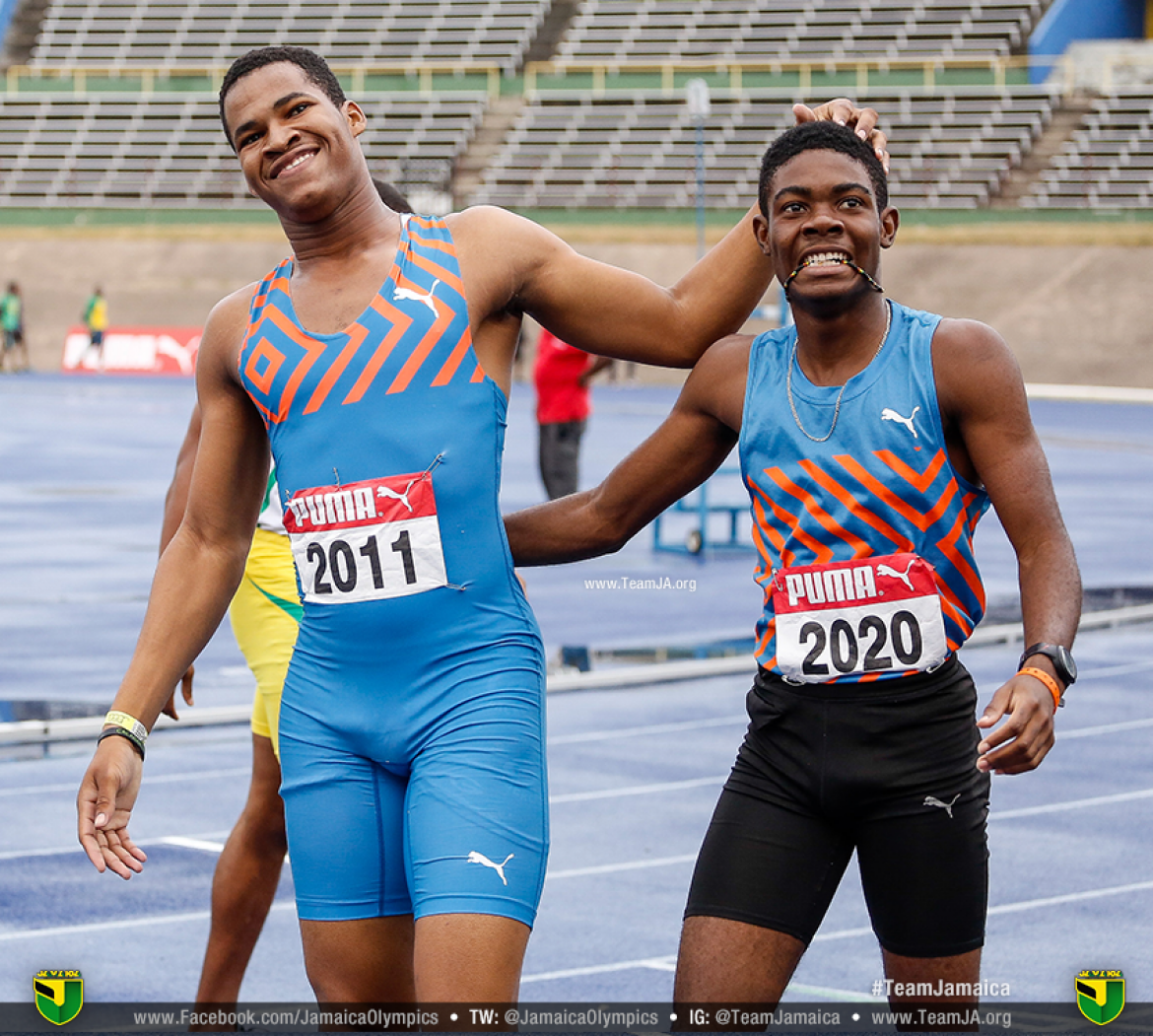 Day two brought more of the same with low spectator turnout, small fields and gaps in the organization of the meet. There were however some noteworthy performances as Team Jamaica’s Youth and Junior athletes battled for spots and qualifying marks to don the national colours at the World Youth Championships (WYC) and Pan Am Junior Championships in July and August.

Tissana Hickling of St. Jago High School shed tears of joy after achieving the 6.00m qualifying standard for the WYC. Hickling twice achieved the 6.00m but her efforts were thwarted by a strong following wind on both occasions. She had jumps of 6.23m (4.3 m/s) and 6.00m (2.2 m/s) before the wind subsided long enough for her to jump 6.14m (0.2 m/s) to secure her spot on the team to the Cali 2015 WYC.

Paketo Dudley of Jamaica College also secured his spot on the Jamaican team after achieving the qualifying standard on his way to winning the Boy’s U18 Long Jump title with a best effort of 7.44m. Kevin Nedrick of Petersfield secured his 3rd U18 title when he won the U18 Boys Shot Put with a best mark of 18.32 to beat Kyle Mitchell of Wolmer’s Boys’ School 18.26. Both Nedrick and Mitchell attained the WYC qualifying mark of 18.00m.

The highly anticipated 100m hurdles for U18 girls lived up to expectation with world youth number 2 ranked Janeek Brown of Wolmer’s High School for Girls gaining the upper hand close hope to pip Sydney Marshall of Manchester High in the keenly contested event. Brown, the CARIFTA U18 record holder won in 13.44 with marshall 2nd in 13.46.

The U18 Boys 110m Hurdles had only two competitors with Calabar High’s Alex Robinson winning in 13.93. The U20 Girls 100m Hurdles was a no contest as 2013 WYC Yanique Thompson of GC Foster College outclassed rivals to win in 13.42. Immaculate Conception’s Jeanine Williams was a distant 2nd in 13.86. Roje Jackson-Chin who has endured a miserable season picked the ideal moment to get it right and in the process upset the big favourite Seannie Selvin of Calabar High School. Jackson-Chin stopped the clock in 13.62 to outlean Selvin (13.64) at the line.

Christopher Taylor’s exploits this season have been well documented and as such many saw victory in the U18 Boys 400m as a mere formality for the Calabar High School phenom. Taylor won with consummate ease even if the margin of victory and time did not reflect that. The holder of the World Youth best for the distance cruised in for a comfortable win in 46.72 ahead of team-mate Anthony Carpenter who clocked a personal best 46.92. Taylor in a post race interview with Team Jamaica Sports indicated that it was part of the race strategy to ensure the one two finish for the Calabar duo. He is looking forward to the WYC and in his words he has to ‘run faster than the record (45.55) to win’.

The girls equivalent saw Satanya Wright of STETHS making it a gate to wire affair crossing the line in a modest 56.02, well clear of Janiel Moore of Edwin Allen High (56.82).

Renardo Wilson of Calabar High School had the small crowd singing his praises after a brilliant display which saw him dismissing a decent field to win in an impressive personal best time of 46.31. Wilson described his win as ‘a dream come true….an awesome feeling’. Ivan Henry of St. Jago High (47.56) must still be wondering what hit him as he was no match for the fleet-footed Wilson. In one of the biggest upsets on the day, Candace Mcleod of Papine High (54.11) beat the highly touted Dawnalee Loney of Camperdown High (54.46) in the U20 Girls 400m.

U18 athlete Leon Clarke decided to take his chance against the U20 Boys in the 800m and this paid handsome dividends as the tall and slender St. Jago High athlete recorded a new personal best 1.51.36 and may have done enough to force the JAAA to name him to the WYC team. Chrissani May of Holmwood Technical High also gave the selectors a gentle nudge after destroying the field to win the U18 Girls 800m in 2.12.36. The U18 Boys 800m went to Ken Reyes of Jamaica College while the Girls U20 saw Nickiesha Grant of the University of the West Indies coming out on top in the event which saw just one other athlete facing the starter.

The 200m for girls resulted in easy wins for the favourites in both sections. Shaneil English of St. Jago High came off the curve in front and just kept moving further away from rivals for a facile win in 23.87. Shellece Clarke looked off colour yet again but held on for 2nd in 24.61 to reverse the placings on Green Island’s Venesha Pusey who edged her for 2nd in the 100m. The technically sound Sashalee Forbes looked a cut above rivals as she took the U20 Girls 200m in 23.71 ahead of Kimone Hinds of Green Island High (24.57). Forbes won the 100m on the opening day.

The boys’ categories produced exciting finishes with the pre race favourites failing to justify their billing in a bid for the sprint double. U18 Boys 100m champion Xavior Angus of Calabar High looked to have the race at his mercy but failed to withstand the persistent challenge of St. Jago’s Michael Bentley who made up for his below par effort in the 100m to win in 21. 57. Angus (21.59) had to settle for the runner up spot. In the U20 Boys 200m, Xandre Blake of Calabar was outrun by Shivnarine Smalling of Kingston College who recorded a personal best 21.12. Blake lost second place close home as he was reeled in by the fast closing Hujaye Cornwall of STETHS.

Other winners on the day were Ayesha Champagnie (U20 Girls Shot Put), Demar Gayle who won the U20 Boys equivalent to complete the Discus/Shot Put double, lone competitor Akeem Kerr of Jamaica College (U 20 Boys Pole Vault) and Clayton Brown of Jamaica College (U20 Boys High Jump).