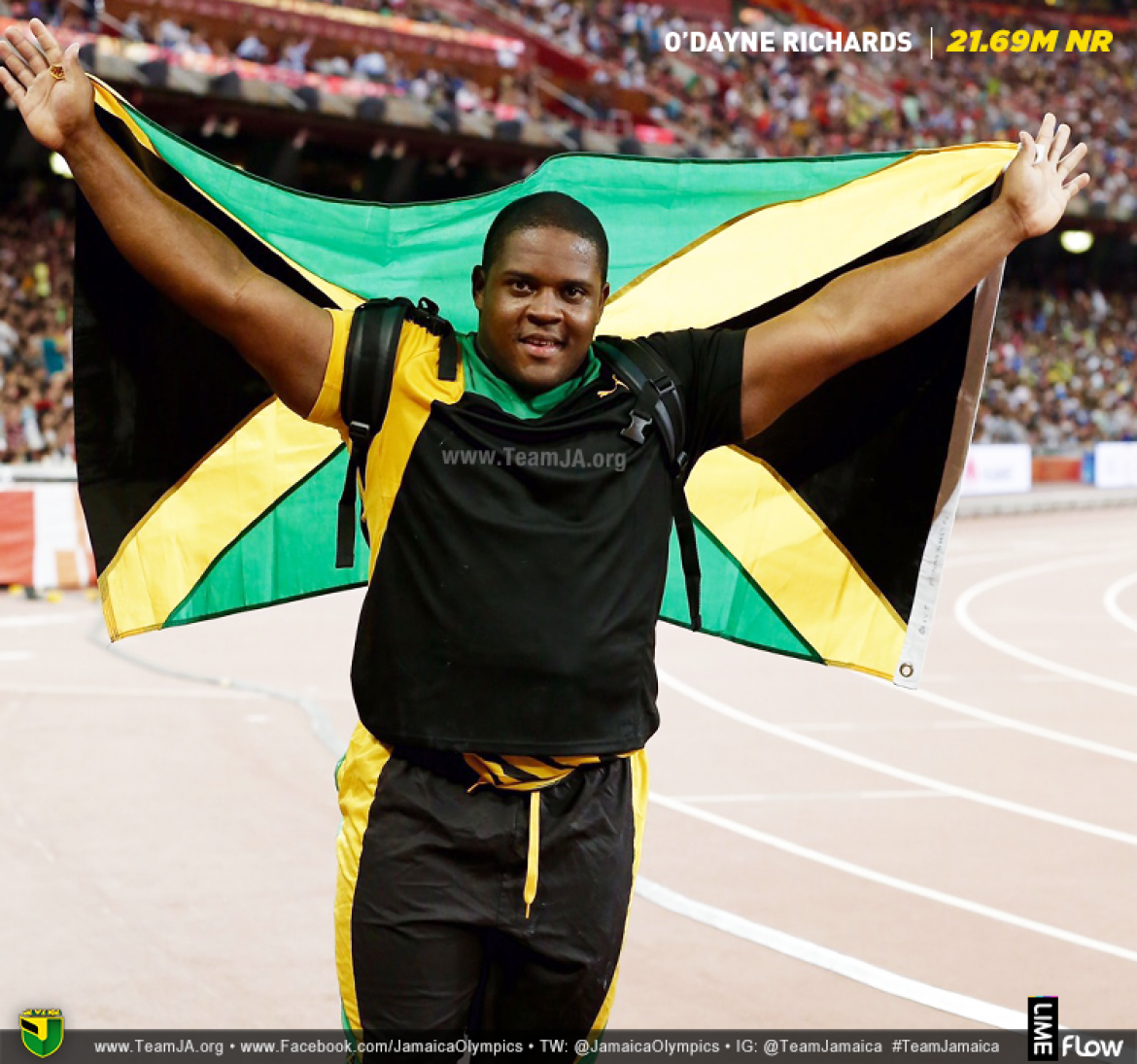 O’Dayne Richards was a man on a mission. That was mission Beijing and the chance to create history with Jamaica’s first ever medal in a throwing event at a senior global championship. Mission accomplished as the gentle giant, affectionately called ‘Fred’ secured the historic Bronze medal and got Team Jamaica’s medal count off and running at the 15th IAAF World Championships inside the iconic Bird’s Nest Stadium in Beijing, China.

For a while it seemed the Gold was within his grasp after his massive Jamaica National Record equaling throw of 21.69M in the 3rd round of the men’s Shot Put final. His lead lasted until the 5th round when the world’s top 2 ranked throwers cranked it up another level.

World number one Joe Kovacs of the USA who was out of medal contention summoned from deep within and came up with 21.93M to take the lead, a mark that turned out to be the Gold medal throw. World number two and the defending champion David Storl of Germany also responded hurling 21.74M to relegate Richards to the Bronze medal position.

The former St. George’s College athlete has been making his name as a big meet performer and the Bronze medal won has gone a far way in cementing that status. Richards has enjoyed good success over the past 4 years mining Gold at several meets.

Prior to his Bronze medal effort, Richards triumphed at the 2015 Pan Am Games in Canada. The 26 year old won Gold in the Shot Put with a best throw of 21.69M to break the National Record he set less than a year ago. That mark placed him at number three on the 2015 World List behind Joe Kovacs of the USA (22.56M) and David Storl of Germany (22.20M).

In 2014 Richards raised his profile on the world scene when he won the Gold Medal at the Commonwealth Games in Scotland. His winning mark of 21.61M established a new National Record for the event. He went on to the the 2nd IAAF Continental Cup in Marrakech, Morocco where he copped the Silver Medal with a best throw of 21.10M.

Richard’s resume also include back to back Gold Medals at the Central American and Caribbean Championships (CAC). He won in 2013 with a mark of 20.97M to successfully defend the title he won in 2011 when registering a best mark of 19.16M. The unassuming Richards first announced his presence to the world at the 2011 World University Games in Shenzhen, China when topping the field with a throw of 19.93M.

The Linval Swaby coached thrower made a return to China but this time to the storied Bird’s Nest Stadium in Beijing where he etched his name in history by securing Jamaica’s first throwing medal at the senior IAAF World Championships.