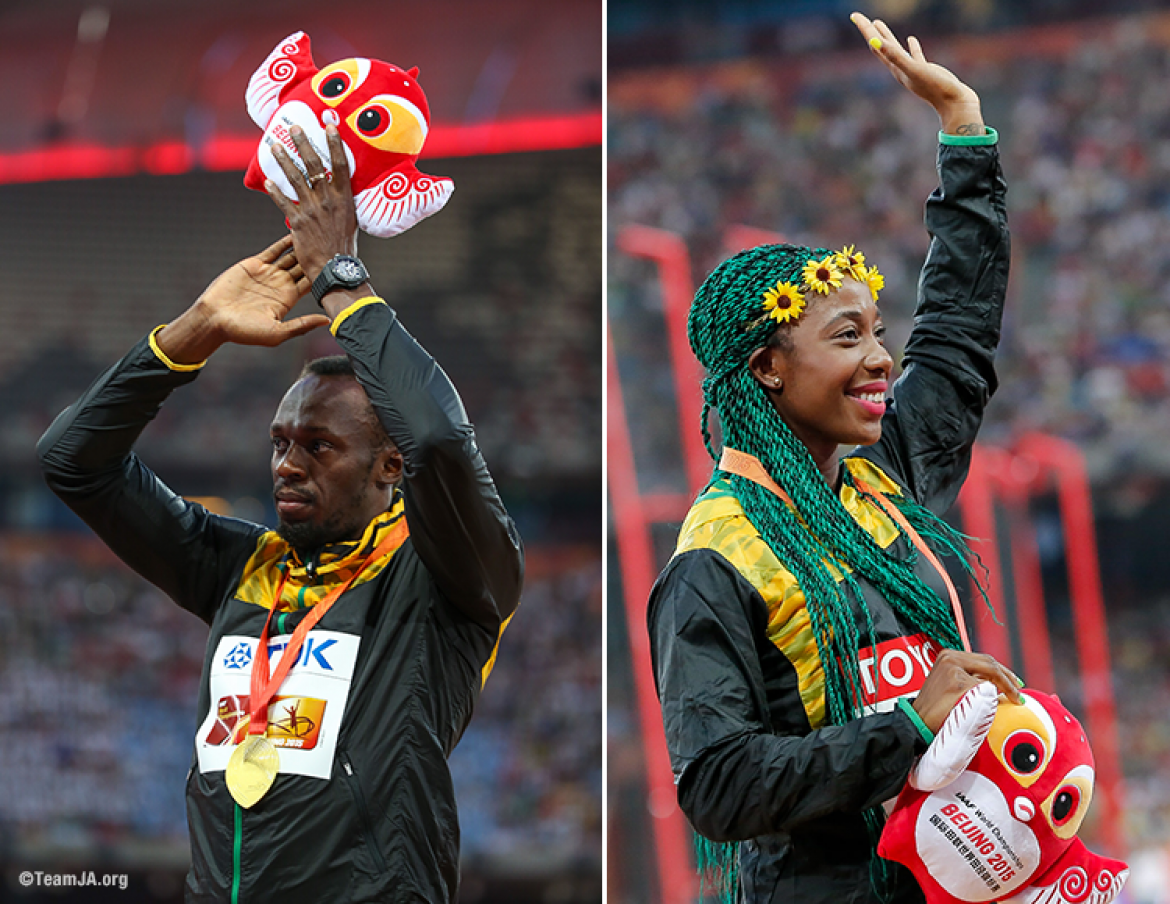 Usain Bolt may have got out of the starting blocks much faster than Shelly-Ann Fraser-Pryce as far as their respective track and field careers are concerned. He is also a giant when compared to the diminutive “Pocket Rocket”, his 6ft 5in towering over her 5ft frame. They do have a few things in common though.

Bolt defies his height and the supposed disadvantages while Fraser-Pryce defies her lack of inches to beat back their fiercest competition to deliver time and time again. The parallel in their careers especially over 100m is remarkable (of course ignoring the mind boggling world records of Bolt).

The Bird’s Nest Stadium was the place where both won their first senior global title over 100m. Bolt’s win was expected, Fraser-Pryce’s triumph somewhat of a surprise. The IAAF’s poster boy won the 100m at the Berlin World Championships and of course, the Pocket Rocket followed with a sensational win of her own.

In 2011 both saw their stranglehold on track and field’s blue ribband event being released. Fraser-Pryce, coming back from injury and a brief suspension was 4th behind Carmelita Jeter, compatriot Veronica Campbell-Brown and Kelly-Ann Baptiste of Trinidad and Tobago. Bolt lost his title after a shocking false start, with training partner Yohan Blake coming up trumps for the title.

Normal service was restored in 2012 at the London Olympics with both athletes, separated in age by 4 months, scored exciting wins in the showpiece event. The 2013 IAAF World Championships in Moscow, Russia was more of the same as Bolt and Fraser-Pryce won their second world title on the way to winning three Gold medals.

The Jamaican superstars returned to where it all began, the Bird’s Nest Stadium with the chance to create history, an unprecedented third world title over 100m. The now 29 year old Bolt faced arguably the most challenging race of his career, not just because he was facing the high-flying and pumped up world leader for the last two years, Justin Gatlin but also because of questions regarding his form, fitness and race sharpness.

Added to the pressure was the billing of the race as the clash between the much adored face of track and field and the cocky Gatlin, seen in many quarters as the notorious villain. Bolt passed this extreme test to win a historic 3rd sprint title at the IAAF World Championships.

A day later, it was the turn of 28 year old Fraser-Pryce to replicate the unprecedented feat of her illustrious team-mate. She faced a different pressure, that of confirming her pre championship billing as the overwhelming favourite. Like Bolt, the Pocket Rocket relishes a challenge and after the first 30m, it was clear that yet again, she was going to match him. A triumphant punch in the air 10.76 seconds after the starter’s gun, confirmed it. Can they do it again in 2016? The Rio Olympics will provide all the answers.