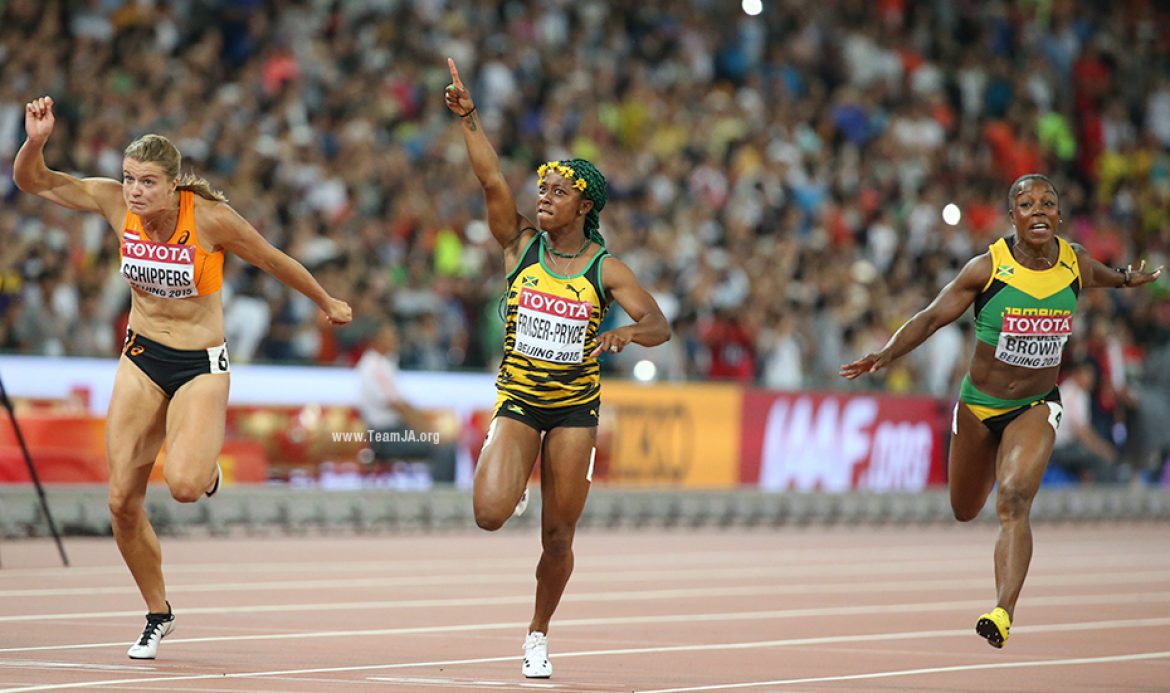 Jamaicans use the expression ‘likkle but wi tallawah’ to describe our beloved country which has always punched above its weight in many areas including track and field. One athlete has over the last 8 years embodied on an individual level the concept of ‘Likkle but wi tallawah’….literally.

The diminutive Shelly-Ann Fraser-Pryce may be just 5 feet tall but her record at global championships has her looking more like her 6 feet 5 inches tall compatriot Usain Bolt, the only sprinter with as many individual world and Olympic 100m titles over a similar period. In 2013 she created history by becoming the first woman to win three world championship titles over 100m. History beckons once again. No woman has ever won three 100m titles at the Olympic Games.

The pint-sized ever smiling young lady known the world over as the ‘The Pocket Rocket’ is standing on the threshold of history. In 2008, she was the rookie that went to the party and stole the show winning the title with a scintillating 10.78. Four years later she was one of the favourites and duly obliged with a close win in 10.75.

She enters the Rio Games perhaps more vulnerable than she has been since her rise to the top of women’s sprinting with the odds-makers, pundits, fans and even the band-wagonists writing her off. A nagging toe injury which has curtailed her training for much of this season, her loss to Marie Josee Ta Lou of the Ivory Coast at the London Anniversary Games and the strength in depth in the event has fertilized the seeds of doubt.

The field in Rio will be arguably the strongest ever assembled with no fewer than six athletes having legitimate claims of halting Fraser-Pryce’s march to an unprecedented 3rd Olympic crown. The likes of compatriot Elaine Thompson who has the world leading 10.70, the flying Dutchwoman Dafne Schippers (10.83), the ‘eye-popping’ and beautifully named English Gardner (10.74) as well as her American teammate Torie Bowie (10.78) are bonafide Gold medal aspirants. The fiery Tianna Bartoletta (10.78) and Murielle Ahoure (10.78) are also genuine contenders for the coveted 100m title.

Gardner, the US champion, Bowie and Bartoletta will be aiming to win America’s first title since Gail Devers’ 1996 triumph. Schippers, the Silver medalist from the 2015 World Championships, has looked great all season and her usual powerful finish could see her tagging rivals where it matters most.

Thompson but for injury concerns of her own, would have been the favourite. The Jamaican whose rise to the top echelon of women’s sprinting has been nothing short of meteoric, has not raced since her scintillating 10.70 in early July but reports out of the MVP group is that she is poised to deliver big time.

All of Fraser-Pryce’s main rivals have run considerably faster than her 10.93 season best but the Jamaican’s big race pedigree and penchant to remain calm under pressure could see her etching her name indelibly in the annals of Olympic history. Others such as the much improved Ta Lou (10.96),
Trinidad and Tobago’s Michelle Lee Ahye (10.94), Desiree Henry of Great Britain and Christania Williams (11.06) of Jamaica (10.97) will also give the two time defending champion much to think about.

Fraser-Pryce will not relinquish her crown without a fight and a win in Rio will seal her position as the greatest 100m sprinter of all times.