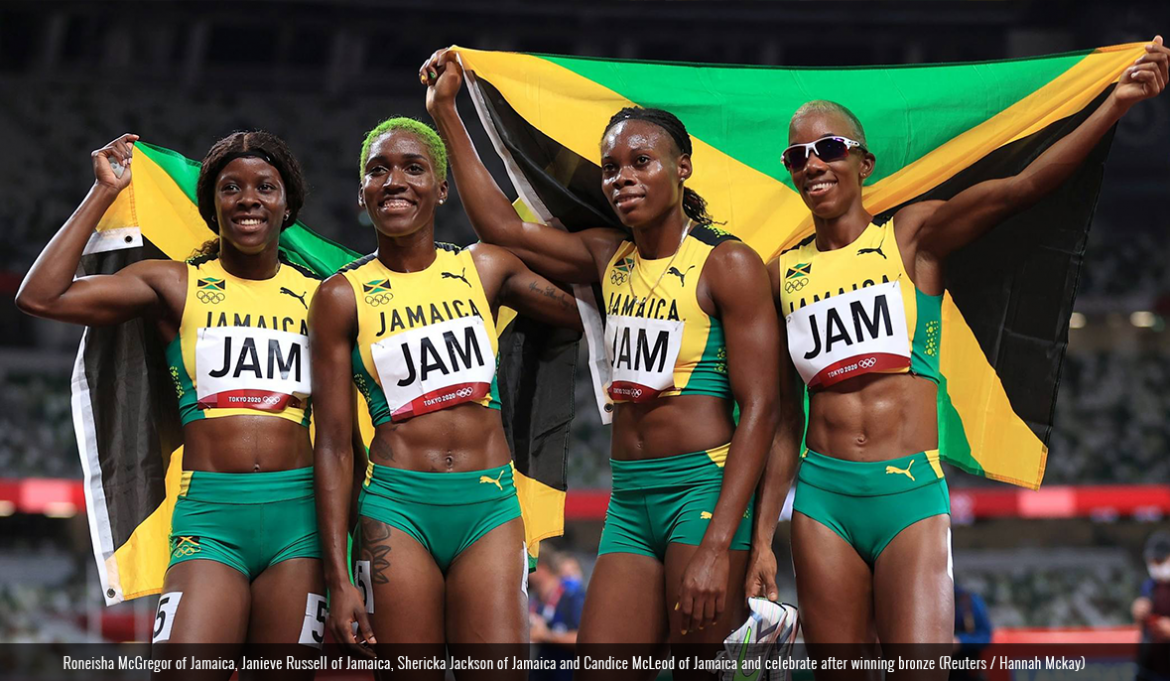 Jamaica brought the curtains down on their Tokyo Games campaign with a bronze medal run in the women’s 4x400m final to finish with nine medals 4 gold, 1 silver and 4 bronze.

Shericka Jackson volunteered to participate as Jamaica faced a selection dilemma after Stephenie-Ann McPherson, a finalist in the women’s 400m final, withdrew due to injury.

It was a commendable move by Jackson, who prior to this final had competed in six races, including the final of the women’s 100m and 4x100m.

Jamaica was up against a powerful Team USA, an excellent Polish quartet and a resurgent Great Britain in the fight for a podium spot. 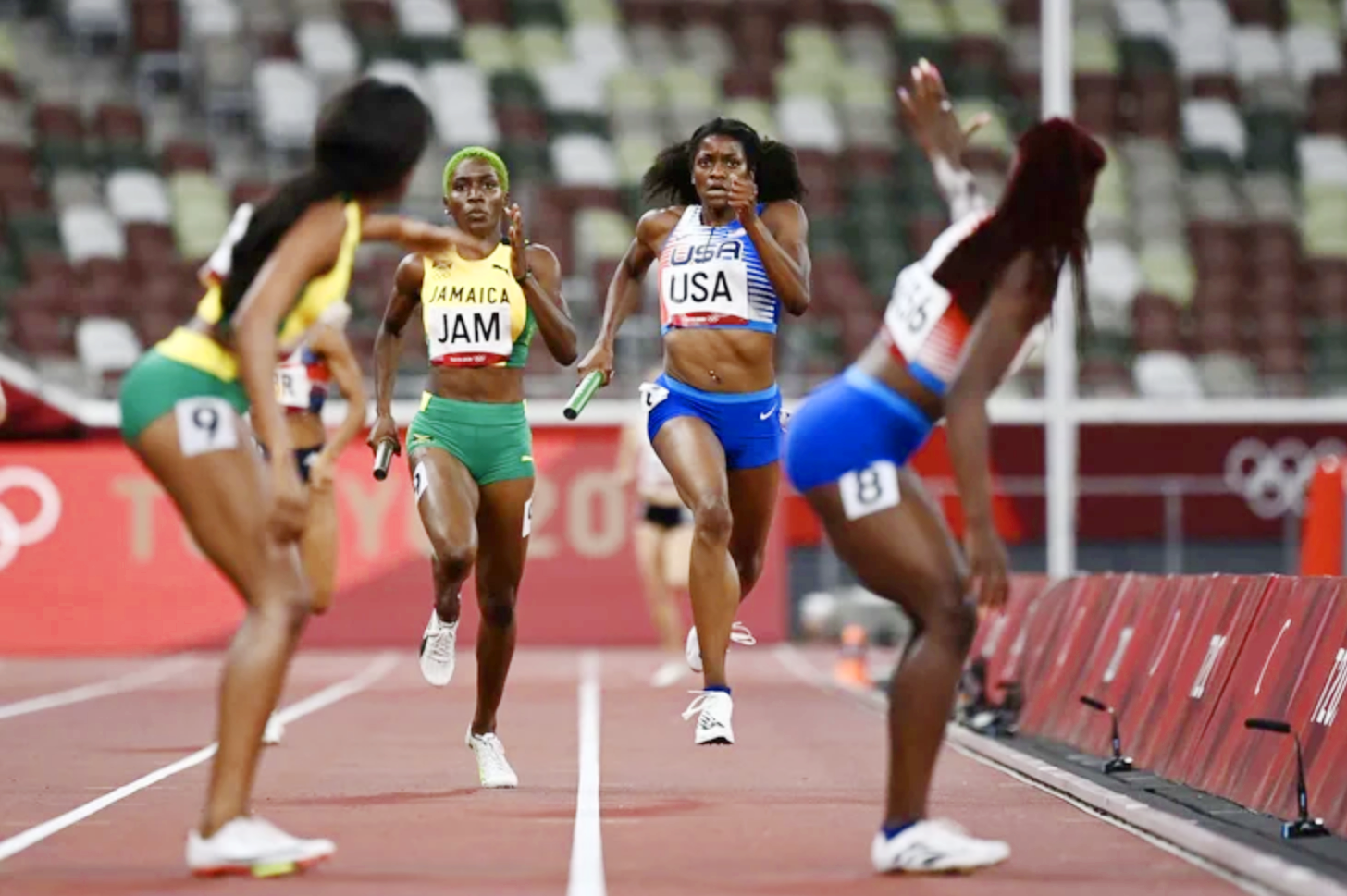 Jamaica’s Janieve Russell (L) and USA’s Kendall Ellis compete in the women’s 4x400m relay heats during the Tokyo 2020 Olympic Games at the Olympic Stadium in Tokyo on August 5, 2021. (Photo by Jewel SAMAD / AFP) (Photo by JEWEL SAMAD/AFP via Getty Images)

After the opening leg, Team USA assumed the lead that grew with each exchange. Jamaica’s Roneisha McGregor was steady running a 50.67 split and handing over fourth.

The battle was truly on for silver with Jamaica occupying third after Janieve Russell made the second exchange to Jackson.

It was quite understandable seeing Jackson, whose pet event is the 400m, conserving energy on the back straight. Many thought she was flirting with danger with her laid-back approach and their hearts would have skipped several beats when Jackson drifted to fourth behind Team USA, Poland and surprise team Canada with more than 200m remaining. 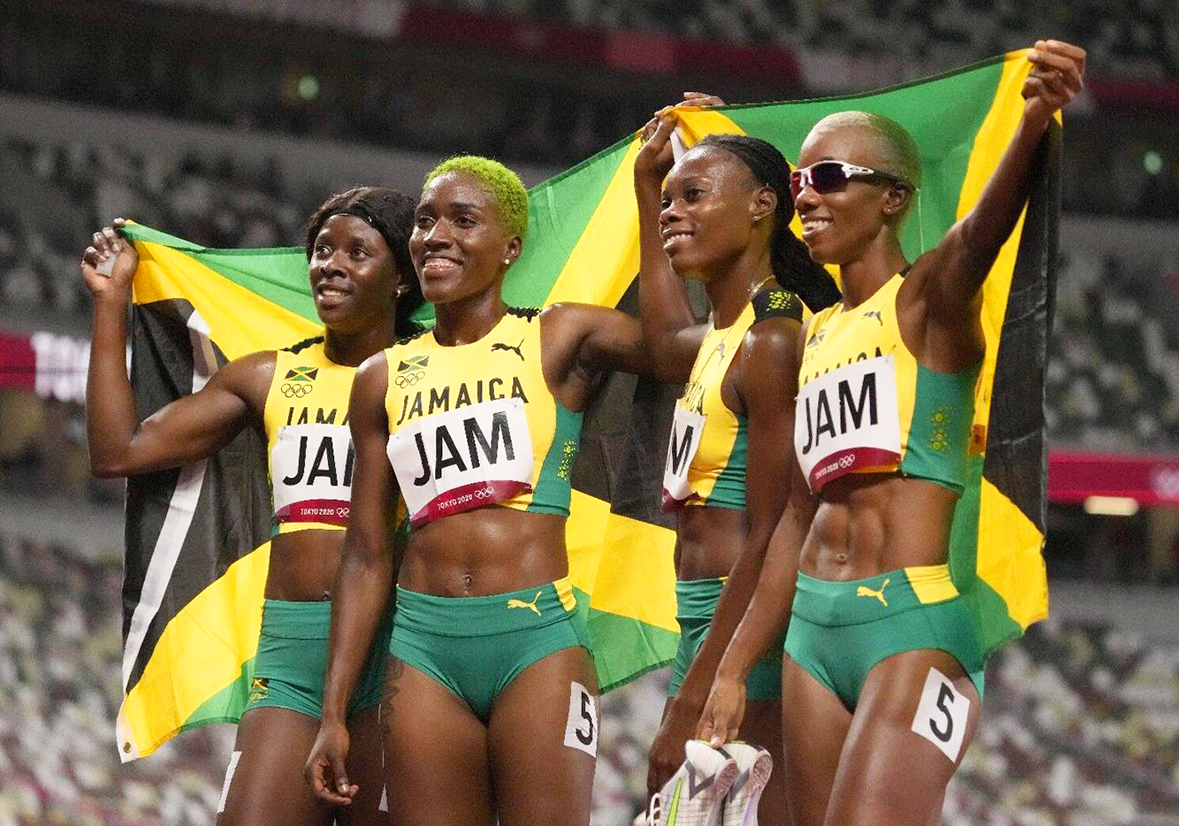 Shericka Jackson, Janieve Russell, Roneisha McGregor and Candice McLeod of Jamaica, from left, celebrate after taking the bronze medal in the final of the women’s 4 x 400-metre relay at the 2020 Summer Olympics, yesterday, in Tokyo, Japan. (Photo: AP)

Jackson began to quicken her pace into the home straight and took aim at the Canadian runner Kyra Constantine, who was in her crosshairs. Jackson caught up with her, but the Canadian fought back and both athletes handed over their batons simultaneously.

Canada quickly surged into third, but Jamaica’s, Candice McLeod on the anchor leg, competing at her first Olympics and given this important duty set off like a woman on a mission to first hold the position and then pounce.

McLeod ran a commendable leg and began to make a move coming off the curve, but Canada’s Sage Watson and Poland’s Justyna Swiety-Ersetic were proving stubborn competitors. 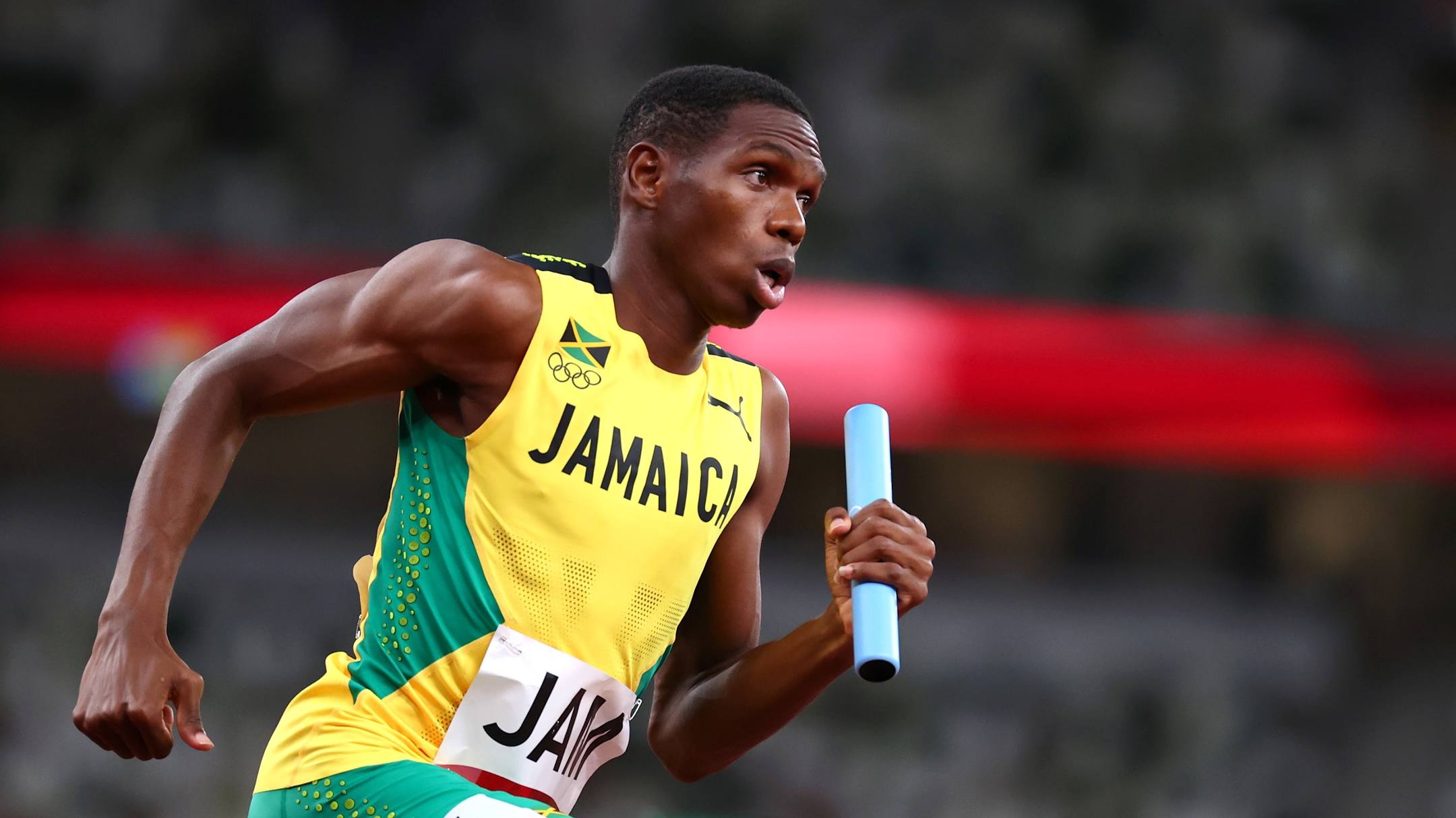 In the men’s equivalent, despite registering a season’s best 2:58.76, Jamaica was never in contention for a medal after handing over in the seventh position on the opening.

Christopher Taylor ran with tenacity on the second leg registering a 43.93 seconds split. Jaheel Hyde, running the third leg, had too much ground to make up and could hand over the baton no higher than sixth to Nathon Allen on the anchor leg.