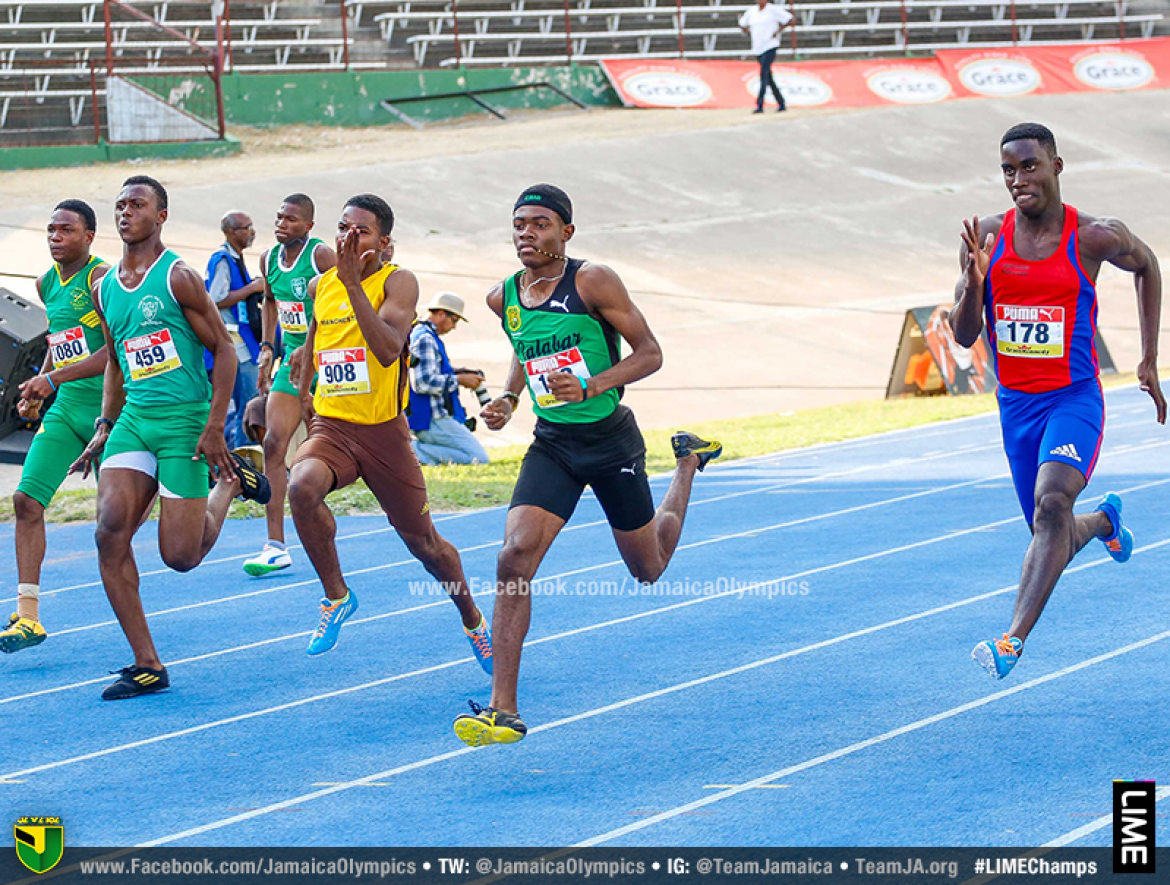 Three finals were contested on Day 2 and as expected Jamaica College won two to end the on top of the Boys’ standings with 28 points ahead of title favourites Calabar on 16 points. Kingston College had a sub par day finishing on 7 points.

Youth Olympic Silver medalist in the Long Jump, Obrien Wasome thrilled the Grandstand crowd and the Jamaica College supporters with a brilliant series of jumps with his four best jumps good enough to win the Gold medal. Wasome’s winning leap was 7.71m, the best effort at ‘Champs’ in many years. Travis Riley of Calabar High (7.40m) nabbed the Silver Medal ahead of Alrick Ottey (7.36m) of Cornwall College. Odaine Lewis of Cornwall College and Ajani James rounded out the top 5.

JC’s prowess in the vertical jumps was again on display with favourite Paketo Dudley obliging with a a leap of 7.21m, the only athlete to surpass 7.00m. Damien Creary (6.75m) of Wolmers claimed the Silver Medal ahead of Calabar’s Daniel Bogle and Yashawn Hamilton of Kingston College.

In the other final contested, Holmwood’s Daniel Glave was an easy winner of the 2000m Steeplechase Open stopping the clock at 6.04.90. Jamaica College ended the day on a high note with their two entrants in the Steeplechase securing 5 points for the Old Hope Road based many time champions.

All the leading contenders progressed after the first round of the 200m for all classes. Calabar’s Michael O’Hara seen by many as a ‘soup’ for the event was the fastest qualifier in Class One with 21.02. Also looking good in qualifying were Kingston College’s Twayne Crooks (21.23), Nigel Ellis of STETHS (21.23) and the St. Jago duo of Martin Manley (21.31) and Chad
Walker (21.29).

The big guns in Class Two all advanced with Calabar’s with Christopher Taylor (21.63) and Tyreke Wilson (21.68) looking very easy. The much talked about Jhevaughn Matherson of Kingston College took his heat in a comfortable 22.29. Michael Bentley of St. Jago was the other top qualifier with 21.74.