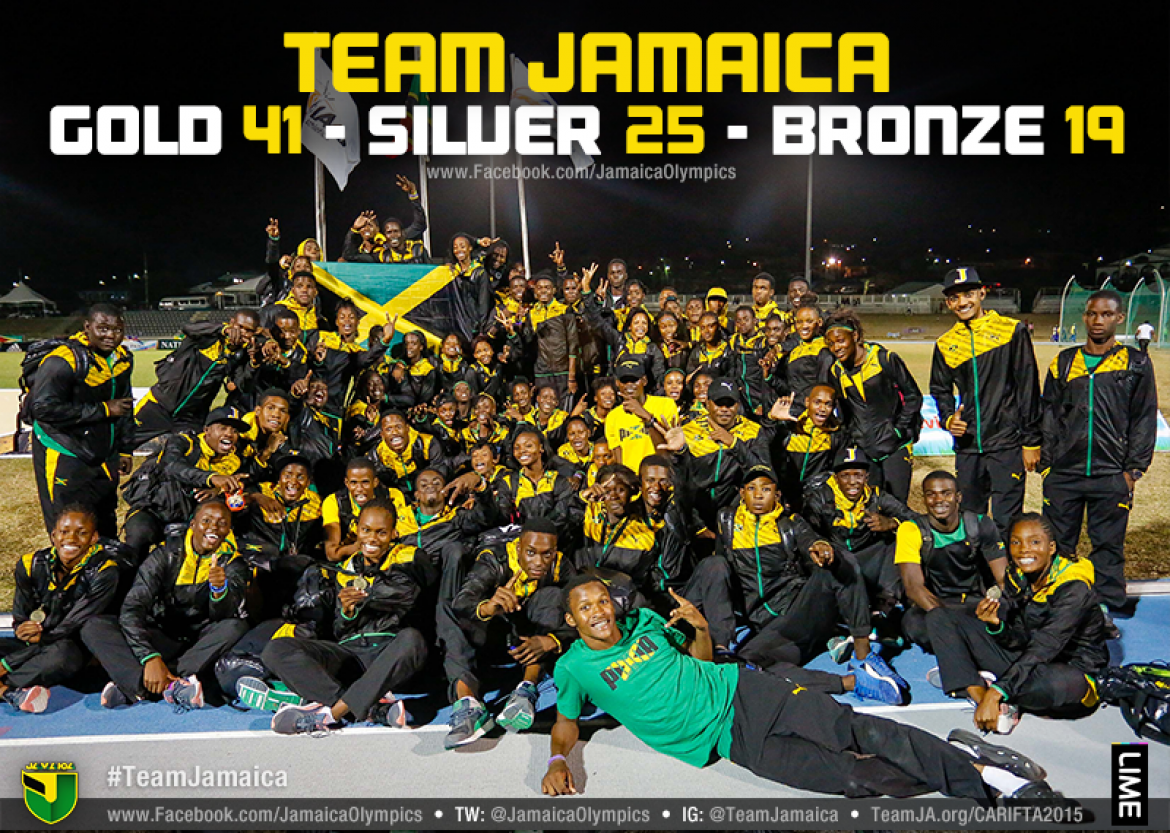 It was the expected avalanche of podium finishes on the final day of the 44th CARIFTA Games as Team Jamaica’s medal quest went into overdrive ending with a sweep of the mile relays.

The real question at the start of the Day 4 (as it has been from Day 1) was whether Team Jamaica could surpass the 89 medals won in 2014. The final medal count showed that Jamaica failed by 4 medals to equal last year’s haul. The team won a total of 85 medals which included 41 Gold, 25 Silver and 19 Bronze. The Bahamas secured 31 medals which consisted of 8 Gold, 13 Silver and 10 Bronze. Barbados (16) won fewer medals than Trinidad and Tobago (22) however finished 3rd overall on the basis of quality medals won having secured 7 Gold medals compared to 6 in the coffers of the twin island republic. The medal tally included those won in events where there were less than three countries represented.

Team Jamaica accounted for at least 9 of the records that were broken at the 2015 CARIFTA Games. Those records included the U18 Girls Shot Put won by Sahjay Stevens, the U18 Girls 400m hurdles with the very promising Junelle Bromfield, the 100m hurdles for U18 girls won by the brilliant Janeek Brown, Christopher Taylor’s win in the U18 400m, the Javelin Throw for U20 girls won by Isheca Binns, the U18 Boys Sprint Relay and the Mile Relay for U18 boys. Christoff Bryan equaled the U20 boys High Jump record.

Isheka Binns, the runner up in 2014 and one of three collegiate athletes on the Jamaican team went one better this year and in the process smashed the 16 year old CARIFTA record in the Javelin Throw for U20 Girls. Binns who a few days earlier had secured Silver in the event for the University of the West Indies in the Inter Collegiate Championships hurled the Javelin to a record 49.72M to erase the previous record of 47.88M set by Sephora Bissoly in 1999. The versatile Ayesha Champagnie, fresh from her Gold medal winning exploits in the Heptathlon was 2nd with a throw of 47.51M.

It was yet another 1-2 for Jamaica as the ‘big boys’ Demar Gayle and Sanjae Lawrence secured the Gold and Silver medals in the U20 Shot Put. Gayle who was winning his 2nd Gold of the Games had a best throw of 19.24M. Lawrence claimed the Silver with 17.92M. He had finished just outside the medal positions in the Discus after experiencing foul trouble.

Jamaica 1-2 has been a common theme throughout the 44th CARIFTA Games and it was no different in the Boys U18 Long Jump. The pair of Pakito Dudley and Shammawi Wellington secured the Gold and Silver medals and were the only two competitors to clear 7.00M. Dudley won with a best jump of 7.03M to edge Wellington with 7.02M. Clement Campbell of Trinidad and Tobago claimed the Bronze with 6.86M.

The U20 Boys Triple Jump was also fruitful for Team Jamaica with another two medals for the ‘Medal Chest’. Obrien Wasome won his 2nd Silver medal with a leap of 15.85M while team-mate Odaine Lewis got the Bronze with a best jump of 15.79M. The event was won by Miguel van Assen of Suriname (16.24M) who was the only competitor with a leap over 16.00M.

Kevin Nedrick (43.22M) and Kyle Mitchell (41.55M) experienced foul trouble and failed to medal in the U18 Boys Discus. Nedrick, a double Silver medalist at the Games finished 8th while Mitchell who won Bronze in the Shot Put could not replicate that effort and finished in 11th.

It was Gold and Bronze for Team Jamaica in the U20 Girls High Jump while it was Gold and Silver in the U20 Girls Discus. Saphia Morgan improved on her 2nd place finish in 2014 to win the High Jump with a clearance of 1.76M. Shadae Lawrence finished 3rd with a clearance of 1.73M. Shanice Love added her name to the list of Gold medal winners topping the Girls U20 Discus field with a throw of 49.39M. Rochelle Frazer repeated her Silver medal finish of 2014 with a mark of 46.86M.

Three from Four for Team Jamaica in Sprint Hurdles

Janeek Brown who last year set a CARIFTA record to win the U 18 Girls 100m hurdles returned this year to rewrite the record books with a scintillating 13.29 (+1.2 ms) seconds to win the Gold. Team-mate Safiya Thompson was in contention for a medal before fading in the latter stages to finish 4th.

2013 World Youth Champion and record holder Yanique Thompson, another collegiate athlete in the Team Jamaica squad, showed her class to beat compatriot Jeanine Williams in the U20 girls 100m hurdles. Thompson clocked a wind-assisted 13.21 (+4.8 ms) for the Gold with fellow sprint relay Gold medalist Williams finishing in 13.40 to claim Silver.

Jordan Roberts led the field for a long way in the U18 Boys 110m Hurdles but was unable to repel the challenge of Bahamian Tavonte Mott. Roberts who was the lone Jamaican competitor in the race secured the Silver medal.

Youth Olympic champion and holder of the World Youth Best Jaheel Hyde won the U20 Boys 110m hurdles in 13.36 to capture his second Gold medal of the Games as Team Jamaica secured its 3rd sprint hurdles title. Xavier Coakley of the Bahamas snatched the Silver with another Jamaican Seanie Selvin getting the Bronze in 13.57. It was the 2nd consecutive year that Hyde was winning the hurdles double after doing so in the U18 category in 2014.

Silver and Bronze in Girls 800m

Chrissani May got the medal show on the road for Team Jamaica in the 800m as she claimed Silver in the U18 Division. May (2.13.28) was no match for eventual Austin Sealy Award winner Mary Fraser of Barbados (2.11.63) who was winning her 3rd Gold medal of the Games. Britnie Dixon who won the Silver medal for Jamaica in the 1500m finished 4th in a time of 2.18.79.

Team Jamaica failed to defend its 2014 Gold and Silver medals in the U20 Girls 800m as the pair of Lisa Buchanan and Sasha-Gaye Whyte who finished 1-2 in the 1500m could not repeat the feat. Buchanan (2.13.26) challenged in the home stretch but ran out of gas and faded into the Bronze medal position. Shaquania Dorsett of Bahamas won in 2.11.99 to notch her 2nd Gold of the Games following her victory in the 400m. Whyte finished 5th in 2.17.31.

It was a Jamaican 1-2 in the U18 Boys 800m for the second straight year. Leon Clarke ran out an easy winner to secure the Gold in the U18 division over team-mate Javauney James who was copping his 2nd Silver medal of the Games. Clarke completed the distance in . In the U20 category Paul Tate came with a storming late run on the outside to win the Gold in 1.52.43. Compatriot Devaughn Smith was edged out for the Silver medal by the Bahamian with both athletes recording the same time of 1.52.59.

The gruelling 5000M for U 20 points provided more bling in the form of Gold and Bronze. Thaleentino Green was a lonely winner in 15.55.29 some six seconds clear of Tallan James of Grenada. Daniel Glave (16.16.24) finished with a rattle to secure his 2nd Bronze of the Games.

Team Jamaica mined Gold and Bronze in the U18 Girls 200m. Shaneil English was very disappointed with her Bronze medal finish in the 100m and made no mistake in the 200m winning in a superb personal best of 23.38. Kimone Shaw gave her usual gutsy performance to secure the Bronze also in a personal best 23.89.

Xavier Angus came from a seemingly hopeless position to snatch the Bronze medal in the U18 Boys 200m. The race was won in impressive style by the favourite Akanni Hislop of Trinidad and Tobago who clocked 20.91 to turn the tables on his 100m conqueror, Javan Martin of the Bahamas who finished in 21.16 to edge the fast finishing Angus (21.17). Jamaica’s other runner in the event, Rushane Edwards picked up an injury and did not finish.

Saqukine Cameron (23.32) secured the Silver medal for Jamaica in the U20 girls 200m. The event was won for the second year running by Kayelle Clarke of Trinidad and Tobago who returned a wind-assisted 23.12 (+4.3). The Bronze went to Keianna Albury of the Bahamas (23.49).

Chad Walker and Nigel Ellis who had qualified for the U20 boys 200m did not report to the starting blocks. Both reportedly sustained injuries during the running of the U20 Boys sprint relay on Day 3. Favourite Jonathan Farinha of Trinidad and Tobago pulled up when negotiating the curve leaving the 100m winner Mario Burke of Barbados to out-finish rivals for the Gold.

Double Gold medalist Junelle Bromfield, Double Silver medalist Sanique Walker, Satanya Wright and Anna-Kaye Allen combined to make short work of rivals to win the Gold medal by a very wide margin. The Jamaican quartet cruised home in 3.39.13 ahead of the Bahamas (3.40.58) with St. Kitts and Nevis well back in third.

The U18 Boys were even more impressive in victory breaking the record set last year by their counterparts. The team of Leonardo Ledgister, Devaughn Ellington, Javauney James and 400m individual Gold medalist and record holder Christopher Taylor on anchor completed the mile relay in 3.12.07 to erase the one year old mark of 3.12.63. Trinidad and Tobago secured the Silver medal over two seconds behind Team Jamaica. The Bronze went to the Bahamas.

The U20 Girls were never in danger of defeat with the team of Yeaschea Williams, Tiffany James, Andrenette Knight and Dawnalee Loney dismantling rivals to win the Gold medal with consummate ease in a time of 3.37.96. The British Virgin Islands (3.46.43) took the Silver medal ahead of Trinidad and Tobago (3.47.55).

The team of Marvin Williams, Terry Thomas, Jaheel Hyde and Michael O’Hara on anchor put on an exhibition in the U20 boys 4x400m romping home by an ever widening margin in 3.09.13. The Bahamas (3.12.33) claimed Silver with the Bronze going to Trinidad and Tobago. It was the 3rd Gold medal of the Games for Jaheel Hyde and the 2nd for O’Hara who also earned a Silver medal in the 100m.