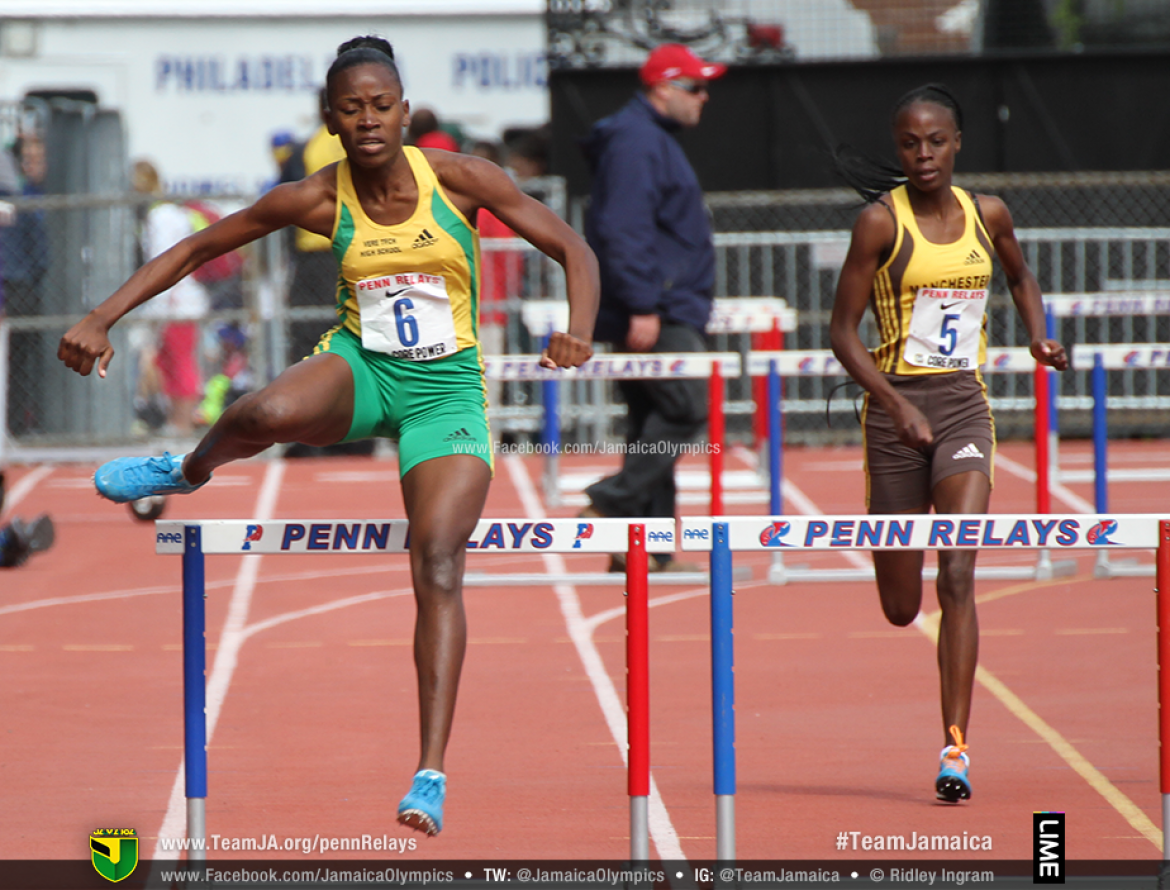 Team Jamaica, as expected brought lots of heat to the chilly conditions at Franklin Field Stadium on Thursday as the 121st Penn relays kicked into high gear. The top Jamaican teams advanced to the finals of their Championship of America events and several Jamaicans distinguished themselves in individual finals on Day 2. Team Jamaica won 4 individual events.

The brilliant Tamara Moncrieffe of Holmwood Technical continued her outstanding 2015 season with a win in the High School Girls’ Triple Jump. Moncrieffe’s best effort of 13.36m not only saw her taking the top spot but also equalled the Penn Relays Record set in 2007 by Vere Technical’s Kimberly Williams (2014 Commonwealth Games Champion). Team Jamaica grabbed the runner up spot with Shanique Wright of Manchester High.

The University of the West Indies’ Rushell Clayton won the College Women’s 400m Hurdles final in 57.81. Ronda Whyte of GC Foster College was 6th in 1.00.18. Junelle Bromfield of St. Elizabeth Technical High School (STETHS) won her heat of the High School Girls’ 400m Hurdles in 1.00.80 which saw her taking 2nd place overall. Brooklynn Broadwater of Springside was the winner with 1.00.69.

The Edwin Allen High duo of Shanice Lewis and Paula Ann Gayle secured memorable wins in their events. Gayle won the Discus with a mark of 51.96m ahead of Shanice Love of Excelsior High School with 50.44m. Lewis led a 1-2 finish for Edwin Allen in the Long Jump with her best effort of 6.11m enough to beat team-mate Danique Bryan who had a best jump of 6.00m.

Jessica Noble of the University of Technology was 4th in the College Women’s Long Jump finals. Ayesha Champagnie of St. Andrew Technical High continued her great form this season with a 3rd place effort in the Javelin Throw for High School Girls while CARIFTA Games U20 Champion and Record Holder Isheka Binns of the University of the West Indies finished 12th in the College Women’s equivalent.

The High School Girls’ 4x400m Championship of America event will also see Team Jamaica having 4 finalists. St. Jago High (3.46.54) qualified with the fastest time and will be joined by Holmwood Technical High (3.51.22), Vere Technical High (3.50.65) and defending champion Edwin Allen High (3.51.75) in the finals. The main threat to the Jamaicans should be Columbia, Nansemond River and Western Branch.

As expected Holmwood Technical High and Vere Technical High were the two Jamaican schools to qualify for the High School Girls’ Championship of America 4x800m finals. The Clarendon-based Vere Technical with the likes of Britnie Dixon progressed to the final with the 2nd fastest time while Holmwood Technical with Shanieke Watson and Chrissani May were 6th fastest. Western Branch (fastest qualifier), Cornwall, Unionville and Great Valley rounded out the top six teams to face the starter in Friday’s final.


[/column2_last]
The College Women’s Championship of America 4x100m final will see the exciting University of Technology (UTech Knights) leading Team Jamaica’s charge with the 2nd fastest time of 45.66. They will be joined in the final by GC Foster College (46.51). UTech finished 3rd in last year’s final. Texas A&M (6th fastest) is the defending champion and has won the event 6 years in a row. The Texas Longhorns (45.59) are the fastest qualifiers.

The UTech Knights leads all qualifiers in the College Women’s 4x400m Championship of America finals and is the lone Team Jamaica representative. The UTech Knights will have in its lineup the dynamic duo of Shericka Jackson and Janieve Russell. They should have a battle royal with defending champion Texas Longhorns. Other teams such as Duke, Clemson and Florida State should ensure a keenly contested event.