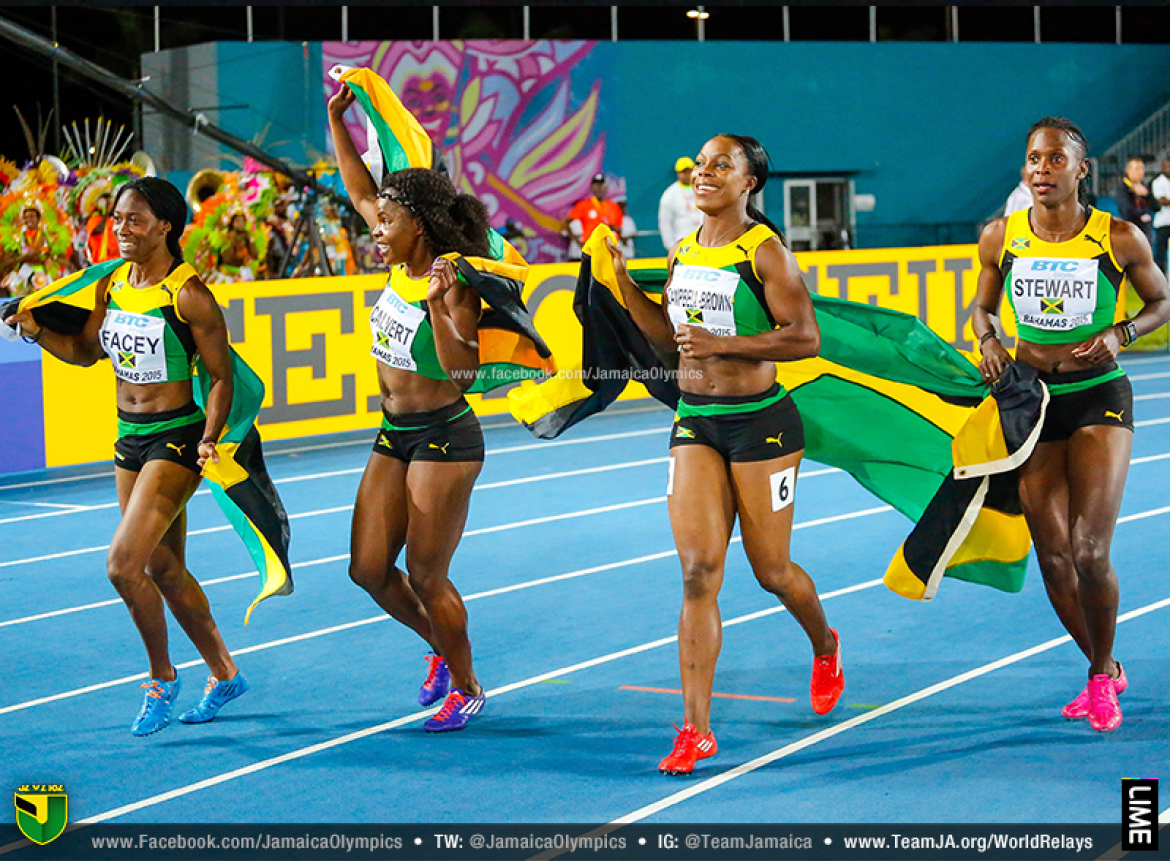 Veronica Campbell-Brown looked like she was going to shed tears a la Athens 2004. The other members of the winning 4x100m team – Kerron Stewart, Schillonie Calvert and Simone Facey all proudly sang the National Anthem ‘Jamaica Land We Love’ while the Black, Green and Gold Jamaican flag was raised. The Jamaican fans gathered at the stadium joined in the singing. It was the second time our anthem was being played on Day 2 of the 2nd IAAF World Relays in Nassau, Bahamas.

Our athletes were determined not to leave the championships without the anthem being played and the Women’s 4x100m and Men’s 4x200m teams delivered. Our three other teams in finals all gave of their best but were not able to secure the top podium finish. The Women’s 4x800m team finished 5th with a National Record run while the Men’s and Women’s 4x400m teams both ran huge season’s bests.

Team Jamaica won the Women’s 4x100m in a World Leading 42.14 ahead of the USA who recorded a season’s best 42.32. Great Britain secured third place in 42.84. In one of the most keenly contested events at the World Relays, the USA and Jamaica were almost in a dead-heat going into the final exchange. The Jamaican trio of Simone Facey, Kerron Stewart and Schillonie Calvert matched strides with their USA counterpartsTianna Bartoletta, Allyson Felix and Kimberlyn Duncan on the first three legs during which the baton exchanges were not brilliant but safe.

Veronica Campbell-Brown and Carmelita Jeter on anchor got the baton  almost simultaneously with Jeter gaining the marginal ascendancy. Campbell-Brown used her superior 200m strength to stay almost level before finding extra to pull off for a narrow but decisive victory over the Jeter-anchored USA team. It was a reversal of last year’s result when the USA got the better of Jamaica. Both teams have dominated the sprint relays at the global level since 2009 with the USA winning three and Jamaica three.

The Men’s 4x200m was drama-filled with both the USA and Jamaica having horrible exchanges between the athletes on the second and third legs. The USA’s mistake was the more costly of the two and resulted in a disqualification despite the brilliant efforts of Justin Gatlin on anchor. Team Jamaica got off to a good start with Nickel Ashmeade handing off to 2014 Commonwealth Games Champion Rasheed Dwyer.

The exchange between Dwyer and Jason Livermore was horrendous but didn’t hurt anything but the winning time as main rivals the USA had an even more disastrous handover. That left the Jamaicans with a big lead which 2013 World Championship Silver medalist Warren Weir never relinquished after receiving the baton from Livermore. The winning time was 1.20.97 well below the 1.18.63 World and Championship Record set by Team Jamaica last year. France finished second in 1.21.49 while Germany (1.22.65) was promoted to third after the disqualification of the USA.

The 4x400m men’s team also recorded a big season’s best finishing fourth in 3.00.23 with the phenomenal Javon Francis on anchor recording a 44.00 split. The other members of the team were Rusheen McDonald, Edino Steele and Ricardo Chambers. The event went to the USA in a World Leading 2.58.43 ahead of home team The Bahamas (2.58.91 – season’s best) and Belgium (2.59.33 – National Record).

The USA won seven of the ten events on show to retain the Golden Baton ahead of Jamaica who won two events. Poland was third overall. The World Relays takes a break in 2016 before returning in 2017 when it will once again be held in Nassau, Bahamas.