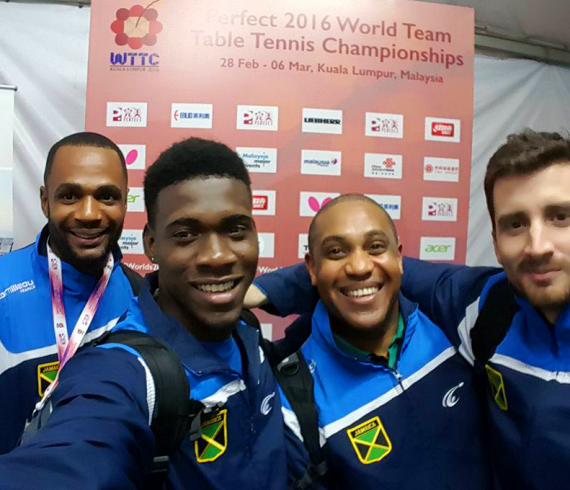 by admin· March 03, 2016· in Table Tennis· 0 comments
Team Jamaica lead by an impressive 3-0 win by Jamaican Champion Kane Watson, a nice 3-2 win by Mark Phillips and a dramatic 3-2 comeback win by 45 year old team Captain Michael Hyatt defeated Asian Team Laos, a country of 6.9 Million people 3-0 this afternoon in the Men’s Team event at the 2016 World Table Tennis Championships.   Lead by Coach Arthur Breton of France Jamaica won against its toughest opponent so far and assured itself of a place in the quarterfinals of the Men’s Team Div 4 competition. Watson was in a no nonsense mood easily dispatching his opponent 11-5, 11-4, 11-3. Young Mark Phillips, 21 years old and representing Jamaica at an International event for the very first time fought back from 1-2 down in the 3rd match of the encounter to win 3-2 and clinch the 3-0 win for Jamaica. But it was the dramatic 3-2 win by Captain Hyatt the kept everyone in the Malaysian stadium at the edge of their seats. Hyatt down 0-1, 1-2 and down 7-10 in the 4th set played some amazing points well away from the table to come back and win the 4th set 13-11 to […] Read More