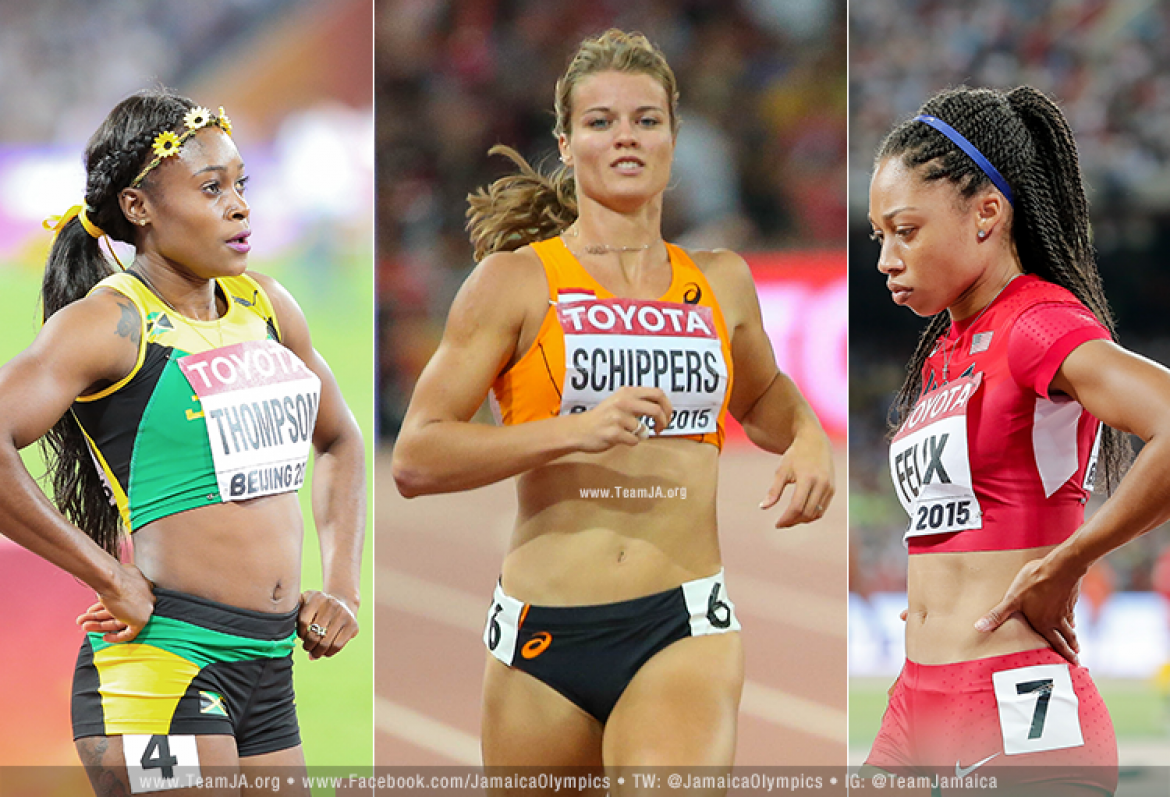 It could be fireworks in the Women’s 200m at the 2015 finale of the Diamond League series in Brussels, Belgium on September 11. The race will see three of the fastest women in history over the distance facing the starter in the much-anticipated face-off. The 2015 World Champion Dafne Schippers, the 3rd fastest woman ever over 200m with 21.63 seconds will renew battle with the the 5th fastest, Elaine Thompson (21.66) after their epic showdown at the Bird’s Nest Stadium almost two weeks ago. On that occasion, the flying Dutchwoman closed like the proverbial runaway train to nab Thompson on the line.

What makes the race even more interesting will be the presence of series leader and three time World Champion over 200m, American Allyson Felix. This changes the dynamics of the race, at least on paper, as Felix is
possibly in the best shape of her life. The 29 year old American who had the only sub 22 clocking before the Beijing World Championships, bypassed the 200m to concentrate on the 400m, which she won easily in Championship Record/World Leading time of 49.26 seconds.

She underlined her form with a mind-boggling sub 48 leg in the 4x400m relays and will be raring to show the new kids on the block who is the real queen of the half lap event. She has the added incentive of knowing that a win will see her retaining the Diamond League series win after her 2014 triumph. Felix has a season’s best time of 21.98 seconds, the 4th fastest time this year. Her personal best is 21.69 seconds which ranks her 6th on the all time list. Felix and Schippers have met 4 times, splitting their head to head at 2 apiece with the American winning in Lausanne in the summer, the only time they have met in 2015.

She leads the 200m Diamond Race by one point ahead of team-mate Jeneba Tarmoh (9 points) who will also face the starter. Not too far adrift is Schippers (4 points) and with 8 points up for grabs, the race is far from
over. Candyce McGrone (4 points) who finished a close 4th in Beijing with a personal best 22.01 seconds is also expected to face the starter and she will be brimming with confidence after back to back wins over 100m in the last seven days. Like Schippers, she is also in with an outside chance of claiming the Diamond League title.

Jamaica’s Elaine ‘Slimmaz’ Thompson, the Beijing Silver medalist is not in contention for the ‘Diamond’ but will be looking to fire a late season salvo with a big win in a super strong field. Thompson appeared to have the Gold medal in her grasp before Schippers’ closing rattle denied her at the line. The 23 year old University of Technology Jamaica (UTech) student athlete will be seeking to not only turn the tables on the red hot and improving Schippers, but also Felix, whom she had behind in their only previous meeting which was over 100m at the Jamaica International Invitational IAAF World Challenge Meet in Kingston in May.