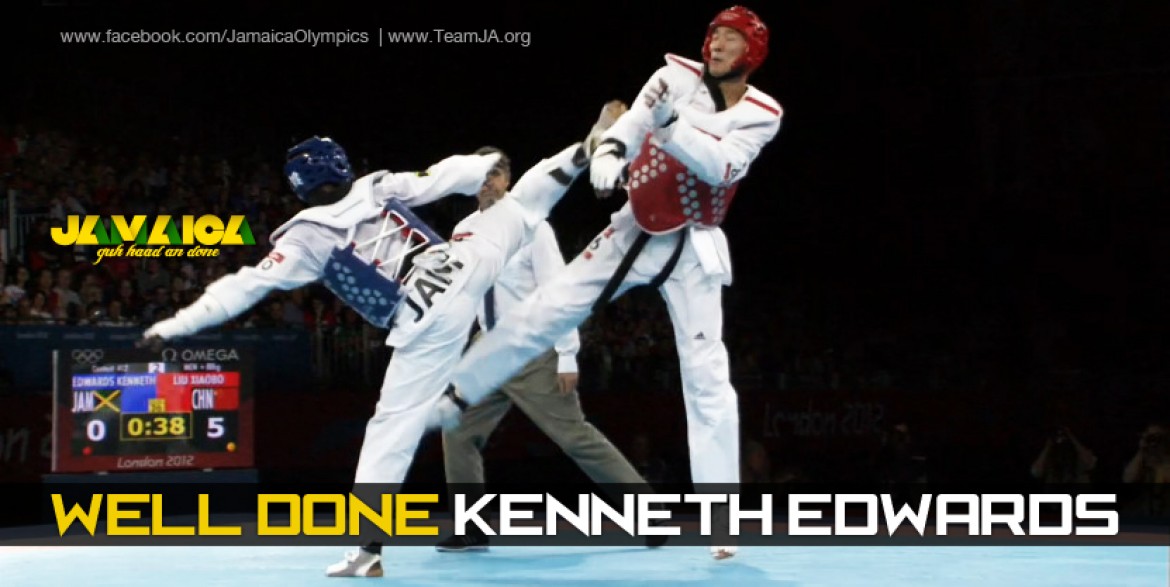 If you were up early in the morning you saw our very own “likkle but talawah” taekwondo athlete perform some technically sound and sharp kicks and routines against the giant in comparison to himself Liu Xiaobo of China. If you haven’t realized Kenneth “KenMan” Edwards is Jamaica’s first Taekwondo athlete to call himself an Olympian representing Jamaica at the games. Kenneth and his coach Alvin Bernard have journeyed for years using his unyielding and determined work ethic tied up with unwavering faith to push him through doubting times, tons of adversity, blood, sweat and tears to get to this point.

His last words before the competition to his fans were:
“It’s still yet a number of hours before the start of the biggest moment of my life to date. That same moment which all the hard work, the sacrifices and the blood, sweat and tears; fueled by moments of pain, disappointment, glory and victories, the amazing spirit of you my friends and loved ones who have been there at any point of this epic journey.. I salute you!! Tomorrow I go hard tomorrow is destiny. Team Kenman!!”

Athletes in Taekwondo need strength and stamina as well as excellent technical ability in order to make every punch and kick count for points. Height can most certainly play a role but mere will and determination makes all the difference as shown with Kenneth. He faired the shorter and lighter of the two but Kenneth left a lasting impression on him and the world. He has come to fight. “Suh Jamaican’s put away di machete and call pon Kenneth, because a new boss is in town.” He executed a great fight and had hoped a few of his kicks would have counted but they didn’t.

We caught up with Kenneth’s girlfriend who shared with us…
“Kenneth is extremely disciplined, focused and determined. He doesn’t allow any negative talk or any obstacle to keep him from pursuing his dreams. He is a very committed man and is always striving to be the best at what he does. In the six years I’ve known him I could probably count on one hand how many times he has ever missed a training session. I’ve yet to meet another person who is as positive and hardworking as he his. So I am sitting and praying with all toes and fingers crossed that this Chinese athlete makes it through and Kenneth gets a chance to fight for the Bronze. I know with one more fight he will give his all to bring home a medal for the country.” (Joseyane Nevers)

Unfortunately Kenneth’s medal fate was in the hands of God and the fight of China’s Liu Xiaobo and Italy’s Carlo Molfetta. Liu lost to the Italian so he fails to advance to the next round. This will leave Kenneth in a position where he will not advance to fight for the Bronze. God definitely has a different path for this young talented taekwondo sensation.

Kenneth Edwards is still a hero and as he stated in one of his facebook status “It is better to try than hope, keep Moving in Faith” Let’s lift up Kenneth and continue supporting him on his Journey through funding, prayers and everything so we can see him collecting GOLD for Jamaica in competitions and years to come. RIO WI SEH. Like his fan page and stay tuned to TeamJa.org as we bring to you a full interview with Kenneth Edwards and more updates on the Jamaican Athletes.