Press conference with the Team Jamaica at World Chess Olympiad 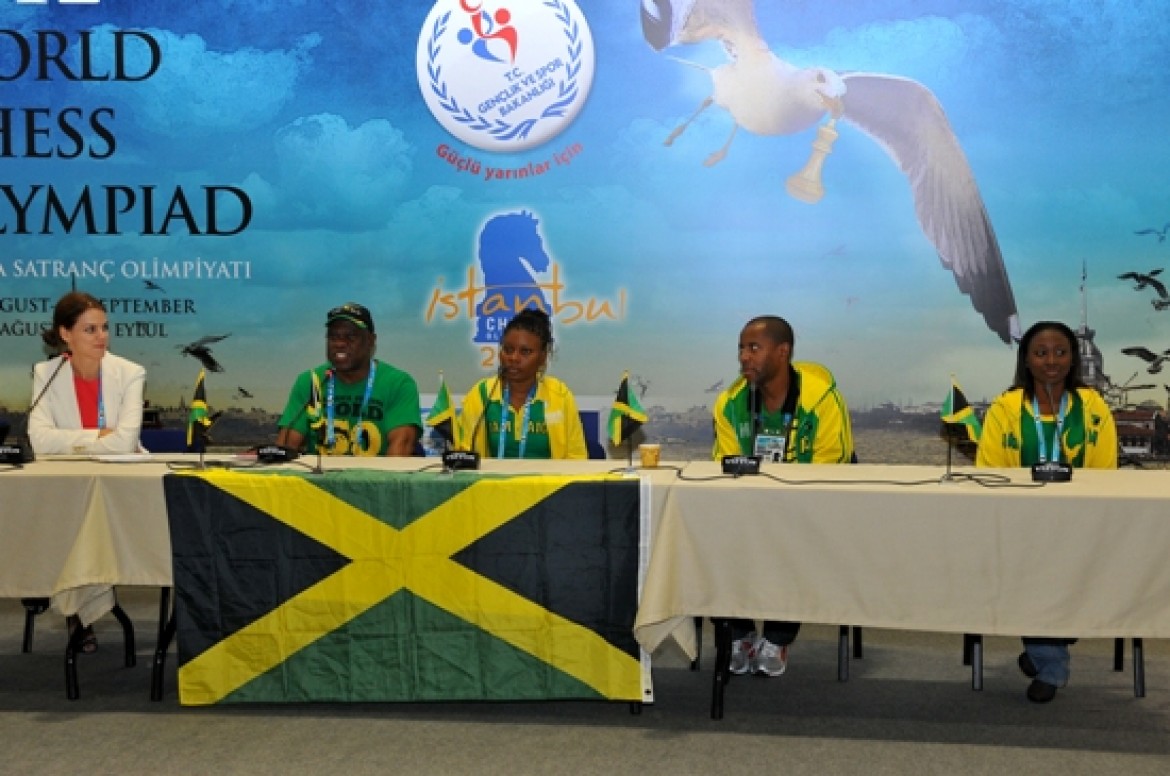 WILKINSON: First of all let me thank the Organizers of the World Chess Olympiad. It is a privilege and pleasure to be in this fantastic city Istanbul. We are enjoying ourselves though the games are tough. The preparations were very good. Our women’s team was preparing with the International Master and coach Russel Porter who happens to be a husband of our 1st board of women’s team.

Our men’s team was also preparing but not on the same level as women did. But we still feel confident that we will do well. We pay a lot of attention to female chess players. Women first, they are very important. In Khanty Mansiysk our women won the category E.

KARLOVICH: What are your goals in the Olympiad?

DEBORA: The main goal is to win and to do my best in every game. At the same time to play the best chess possible. Our victory in category E in the previous Olympiad was challenging in fact. We just tried our best to represent our country. That’s it.

KRISHNA: I am first time in Istanbul, Turkey. This Olympiad is very interesting. You can see a lot of interesting games and I like that all the games are broadcast on several televisions. My personal goal is to attain an International title.

KARLOVICH: I would like to ask the captain of the team. What do you expect from your team at this Olympiad?

PORTER: So far we have not done what we would like to do. But it is only the start and we have some time ahead to make a good score. I wish we could finish with 50% score. The goal that we achieved in the previous Olympiad is very difficult as well, but we want to achieve something like this.

KARLOVICH: It is known that Jamaican federation is very active in the project “Chess in Schools”. Please say something about this direction of chess development.

WILKINSON: We are doing well in this direction, you are right, our federation is very active. Debora Porter is one of our best coaches, she teaches chess in many schools. Another example, our first board of men’s team has a Chess Academy where he teaches chess. Also, during the last few years, we have had a lot of new chess players who started to play chess recently.

According to my estimation, we are approaching the number of 20 000 players, particularly students who came to chess recently. We have many schools where we have chess in the school curriculum. I am quite happy about that, as our population is only 2.7 million people. So, we are close to Turkey in this respect. We have a lot of young talented players who would soon join our national team, I hope.

KARLOVICH: I am sure Mr. Wilkinson likes to sit once at the board to play chess instead of being President? And you Mr. Porter, how do you cope with the stress every day? It is always difficult to wait how your players will finish their games?

WILKINSON: Of course I like to play chess, but mostly I like to help my players and federation.

PORTER: It is always difficult to see the games on and wait for the result. I grieve about my players and look forward for good result.