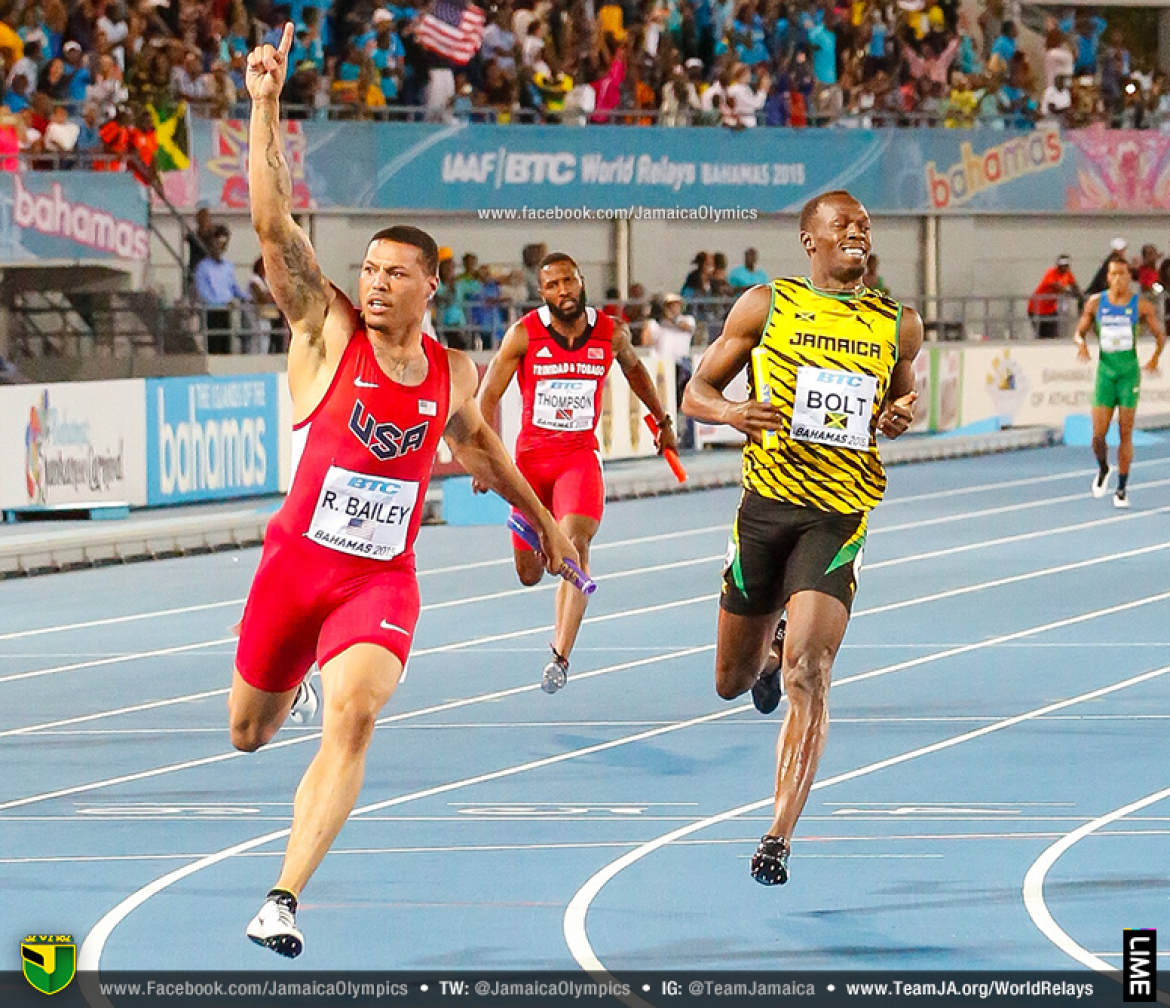 Ryan Bailey crossed the finishing line well ahead of Usain Bolt on anchor. Bailey in celebrating did the signature ‘Lightening Bolt’ pose and then a ‘slit throat’ gesture. The USA men had scored a convincing win over Jamaica, their first win at a global meet since the IAAF World Championships in Osaka, Japan in 2007 – a drought which spanned six global championships.

His elation was palpable as Team USA had just brushed aside a good Jamaican team to win the 4x100m finals at the 2nd IAAF World Relays in Nassau, Bahamas. The American team of Mike Rodgers, Justin Gatlin, Tyson Gay and Bailey won in a Championship Record time of 37.38 to erase the old mark of 37.72 set by Jamaica in the heats at the inaugural staging. Team Jamaica with Nesta Carter, Kemar Bailey-Cole, Nickel Ashmeade and Bolt finished second in 37.68 while Japan was third in 38.20.

Carter and Rodgers on the opening leg were evenly matched with very little separating the teams on the first exchange. That was the closest the Jamaicans would get to the USA men as Gatlin on the second leg obliterated his rivals including Bailey-Cole to give his team a commanding lead.

From there on the USA were not for catching with Gay maintaining the lead to hand over to Bailey. Once that exchange was safe it was all over bar the shouting. Not even the presence of triple world record holder Bolt on anchor could make a difference as the USA sped to victory with Bolt perhaps closing a metre or so.

Earlier in the evening’s proceedings the USA had served notice that they would be the team to beat after winning their heat in a then season’s best 37.87. Jamaica also topped their heat in 38.07. Both the USA and Jamaica ran the same lineup in both the heats and finals. The third heat was won by Trinidad and Tobago.

The other final contested by Team Jamaica, the 4x200m for Women also yielded a Silver medal albeit after the disqualification of the home team Bahamas for an infringement. The Jamaicans also benefited from another horrendous baton exchange by the USA at a global meet. They were way out in front and appeared to be racing the clock only when disaster struck on the final exchange between Jeneba Tarmoh and many time relay gold medalist Allyson Felix.

Shalonda Solomon, Kimberlyn Duncan and Tarmoh appeared to have given the USA an unassailable lead before the foul up allowed Nigeria with the quartet of Blessing Okagbare, Regina George, Dominique Duncan and Christy Udoh to capitalize, taking the event in a National Record time of 1.30.52. The Bahamas looked to have finished a comfortable second with Shaunae Miller running a blistering anchor leg to almost catch Udoh on the final leg for Nigeria.


[/column2_last]
The celebrations of Team Bahamas and the cheering fans at the stadium were short-lived however as news of their their disqualification from the drama-filled event made the rounds among the shell-shocked home crowd. Team Jamaica who finished 3rd in 1.31.75 was promoted to second. Germany also moved up one spot for the Bronze medal.

Team Jamaica almost had a mishap of their own during the first change over between opening leg runner Samantha Henry-Robinson and sprint icon Veronica Campbell-Brown. The Jamaicans lost further ground on the third leg with 400m specialist Shericka Williams who handed over to Sherone Simpson. The back to form Simpson made some gain in a gallant effort on anchor but by then the proverbial horse had already gone through the gate.

Javon Francis is fast developing a reputation as the ‘Houdini’ on Jamaica’s men’s 4x400m team at global meets. In another simply breath-taking display on anchor, the former Calabar High School standout demonstrated the guts and sheer determination that has endeared him to Jamaicans from his days at the Red Hills Road institution. In a run pleasantly reminiscent of his mind boggling run at the Moscow 2013 World Championships, Francis got the baton in 5th with a mountain to climb. So hopeless did the situation seem that even the race commentator John Rollins thought it was impossible….check out the transcript of his coverage after Francis got the baton in 5th:

“The big talking point is that Javon Francis for Jamaica is going to have to fly around this last leg if he is going to somehow get Jamaica into the first two…..The Jamaicans have moved up to fourth but they still got an awful lot to make up and I don’t think there is anyway they are going to get into the top two………and here come the Jamaicans, they are closing, they are flying, they are going to get there….superb performance…the Americans have won but Javon Francis the Jamaican youngster just flew down that final straight and made up maybe 10m or more and somehow managed to get the Jamaicans ahead of Botswana – the Jamaicans take second…tell you what, it will be interesting to see the split on that last leg because the Jamaican youngster on that anchor leg produced an absolutely brilliant run……I said 10m…it might have been more…maybe 12-15m on the crown of the bend….that was phenomenal…”

Rollins found out that Francis could ‘fly’ as he sprouted wings on anchor……the anchor leg split a brilliant 44.01. It is left to be seen whether Francis’ herculean effort took a toll on him but that stunning run in the heats will be talked about for years to come with the same incredulity as that expressed by Rollins. Schoolboy Nathon Allen of St. Jago, in his first senior outing acquitted himself well with a 45.8 split on the third leg. Javere Bell (46.78) and Rusheen McDonald (46.39) had earlier found the going very rough on the first two legs.

There was no need for any such anchor leg heroics for Team Jamaica in the Women’s equivalent as the quartet of Anastacia Le-Roy, Natoya Goule, Christine Day and Stephenie Ann McPherson were never challenged in cruising to a season’s best 3.26.41 ahead of Great Britain (3.28.51). Favourites and defending champions the USA (3.24.05 – World Leading) and Australia (3.30.73) were the other heat winners. France and Poland were the other automatic qualifiers for a place in the final.

It was a great day for the USA as they won three of the four finals contested on the day. the mishap in the women’s 4x200m prevented them from making a clean sweep. they won the 4x800m, the Distance Medley in a World’s Best time and the Men’s 4x100m.