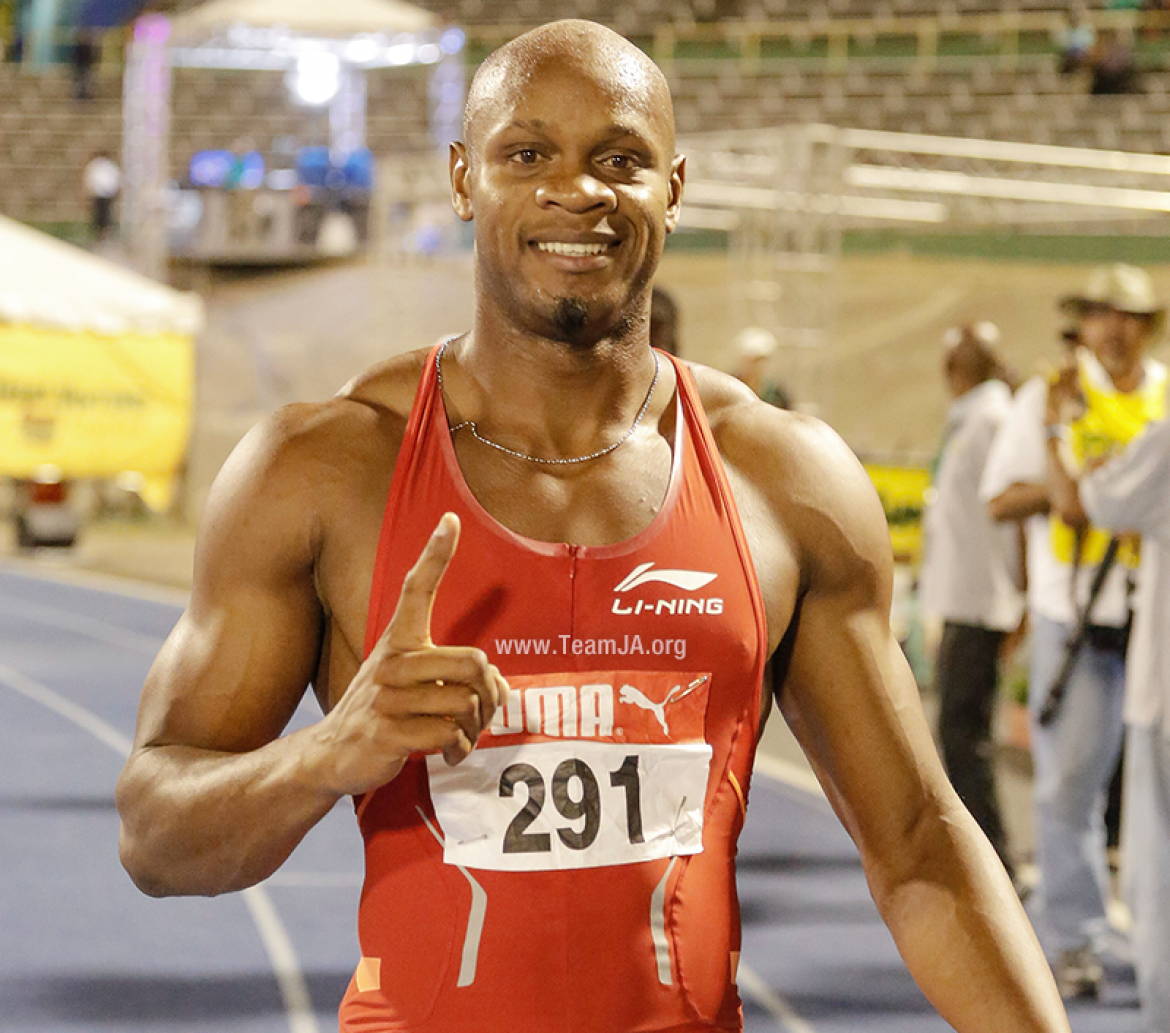 Asafa Powell first won the National Senior Title over 100m in 2003. Many have written him off even at the national level, calling time on his career, even suggesting that he gives his legions of adoring female fans more to appreciate by taking up a career as a model.Twelve years, a few world records, two world championship bronze medals, a high profile relationship with a beauty queen and many injuries later and the Sub 10 King continues to show that he is far from being a spent force.

The 32 year old former MVP stable star and red hot favourite delivered as many expected with a clinical display to win yet another National Senior 100m title on Friday night in front of a decent crowd at the National Stadium. Powell,  who is unbeaten over the distance in 2015 had by his standards a modest start before turning on the afterburners close home to separate himself from a quality field to win in 9.84.

This equaled the time he ran at the Jamaica International Invitational IAAF World Challenge Meet in May. The confident Powell has significantly improved the last quarter of his races since leaving the MVP Track Club but has acknowledged that he needs to improve on his starts, a hallmark of his races while he was at MVP.

Nickel Ashmeade who is recovering from an injury sustained a few weeks ago ran a blinder and ensured that the much more celebrated Powell did not have things his own way. The former St. Jago High star who has been a consistent fixture on national teams to global meets since 2011 lost his national title but clocked 9.91 to finish in the runner up spot, his second fastest time ever behind the 9.90 he ran at the 2013 Moscow World Championship.

Ashmeade, in an interview with Team Jamaica Sports after the quarterfinals on Thursday stated that his main objective was to ‘grab a place in the top 3 and to finish the race healthy’. Mission accomplished for the 2014 Commonwealth Games Bronze Medalist.

It was a blanket finish for the next available spot to Beijing with 2014 Commonwealth Games 100m champion Kemar Bailey-Cole coming with his usual late charge to secure 3rd place in a season best 9.97. The Racers Track Club and former Old Harbour High School standard bearer had a slow start to the season but advertised his well being in the preliminary rounds. The soft spoken Bailey-Cole is confident that he will be even sharper for the Beijing showpiece in August as he seeks to emulate if not surpass his 5th place finish in the 2013 Moscow finals.

As it was in the women’s 100m, the men’s equivalent always had the possibility of a ‘big’ name missing out especially with the somewhat indifferent form of Bailey-Cole and Nesta Carter. The latter was, prior to the final, the only Jamaican apart from Powell who had gone sub 10 this season. Carter was off to his customary great start and late in the event seemed to have enough to at least hold on to 3rd place.

The 2013 Moscow Games Bronze medalist was unable to do so and was pipped on the lean by the fast closing Bailey-Cole as he finished 4th equalling his season best time of 9.98. It was a disappointing outcome for Carter who also finished 4th at the 2013 Jamaica ‘Trials’ but got a reprieve after defending champion Yohan Blake was forced out with injury.


[/column2_last]
Andrew Fisher of UTech had high hopes of finishing in the top 3 and for a long way during Friday night’s final appeared set to fulfill that dream. This was not to be however as the fast starting 2015 Intercollegiate champion could not hold off the charge of his more experienced rivals. The former STETHS star equalled his personal and season best finishing 5th in 10.01.

Tyquendo Tracey (6th) turned in another credible display with a time of 10.15 just outside his personal best of 10.14 set in the quarterfinals while Michael Frater (7th) closed out the field with a decent time of 10.18, not bad for the veteran campaigner who was not even sure at the start of the year if he was going to compete this season.

The 2014 Commonwealth Games Bronze Medalist over 200m suffered an injury soon after the start and failed to finish while 2011 champion Yohan Blake who returned from a long injury layoff a few weeks ago finished 6th in his semi-final and failed to advance to the final.