Historic Third 100m Title for Fraser-Pryce, Campbell-Brown rolls back the clock but misses out on a medal 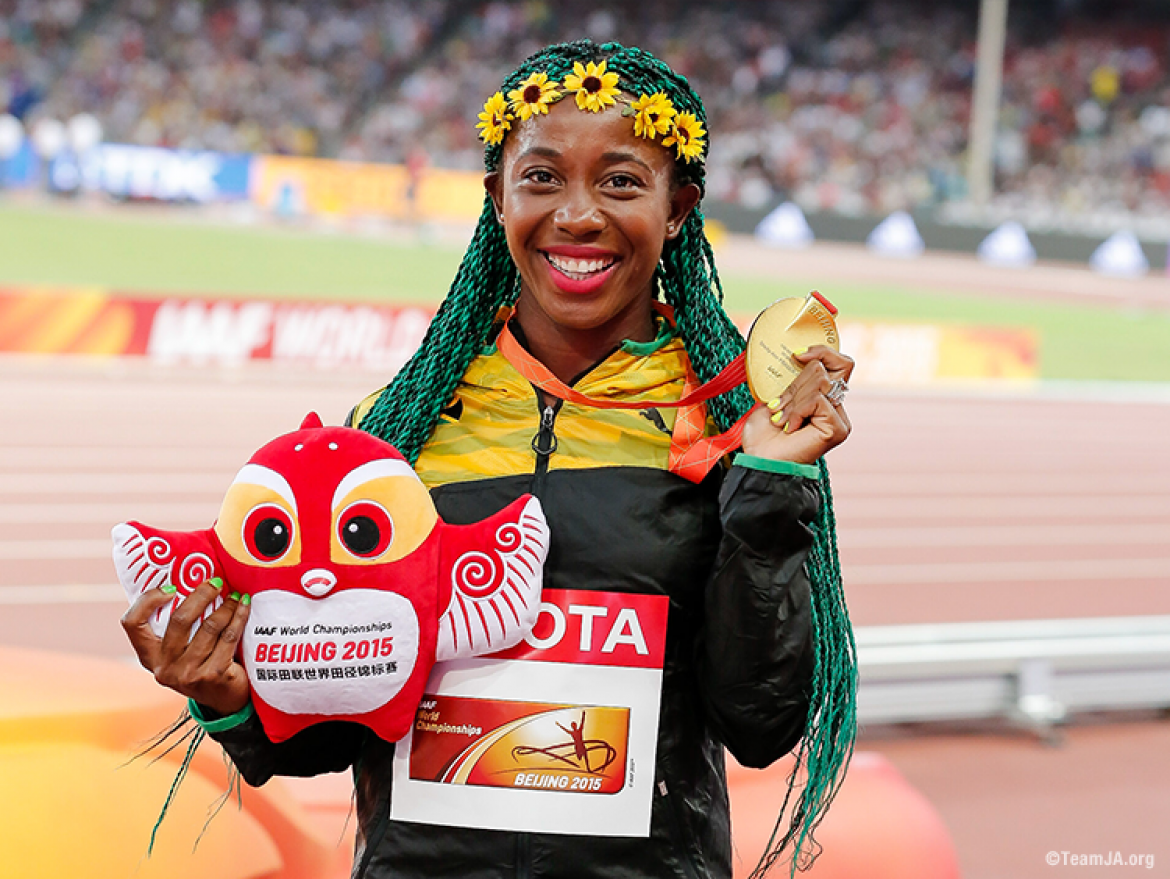 Jamaicans use the expression ‘likkle but wi tallawah’ to describe our beloved country which has always punched above its weight in many areas including track and field. One athlete has over the last 7 years embodied on an individual level the concept of ‘Likkle but wi tallawah’….literally. The flashy green braids and sunflower garland which adorned her hair was an indication that she meant business.

History beckoned. No woman had ever won three world titles in the 100m at the IAAF World Championships now in its 15th edition. One woman, a pint-sized ever smiling young lady known the world over as the ‘The Pocket Rocket’ was standing on the threshold of history. Many expected her to win and claim an unprecedented third world championship crown.

When the dust settled, the diminutive Shelly-Ann Fraser-Pryce continued to sit on her throne as the queen of women’s sprinting. The 28 year old Jamaican may be just 5 feet tall but to her rivals, she must be looking more like her 6 feet 5 inches tall compatriot Usain Bolt who just a day before also etched his name in the annals of history (again) with his 3rd 100m World Championship title.

Fraser-Pryce won the clash of the world’s top female sprinters, stopping the clock in 10.76 seconds ahead of the flying Dutchwoman Dafne Schippers who broke her own national record yet again with an impressive 10.81 seconds. The margin may have been somewhat flattering for Schippers as Fraser-Pryce had built up a commanding advantage, even finding time a few metres from the finish line to punch the air in delight with one finger pointed up signaling that she was still the number one.

Third went to the American Torie Bowie (10.86) who found extra close home to pip the evergreen former champion Veronica Campbell-Brown (10.91). Michelle Lee Ahye of Trinidad and Tobago was 5th in 10.98 ahead of her compatriot Kelly-Ann Baptiste (11.01). Jamaican Natasha Morrison was 7th in 11.02, the same time recorded by 8th place Blessing Okagbare, one of the pre race medal favourites.

Fraser-Pryce was returning to the Bird’s Nest Stadium, the place where she first introduced herself to the world with a somewhat surprising win at the 2008 Olympic Games. Since that time she has added considerably to her growing legacy as arguably one of, if not the greatest female sprinter in history over 100m. She has beaten the best the world has to offer time and time again.

This was her 3rd triumph over 100m at the IAAF World Championships in 4 attempts, the only blot on her copybook coming in 2011 when she finished 4th after a short suspension and a few injuries. She also has an individual Gold in the 200m to add to her back to back Olympic titles over the short sprint, a Silver medal over 200m as well as a World Indoor title over 60m. No woman in history can match the Pocket Rocket’s Resume over 100m.

Fraser-Pryce’s compatriot and Team Jamaica captain Veronica Campbell-Brown silenced a lot of her critics with a brilliant run which saw her just failing to hold off Bowie. Campbell-Brown who won the world title in Osaka, Japan was competing in her 5th 100m finals at the IAAF World Championship, with a medal haul of 1 Gold, and 2 Silver with two agonizing misses in 4th place.

The rookie Natasha Morrison acquitted herself well in her first major global final. The 22 year old former Glengoffe High School student was in contention for a much higher placing up to 80m before fading to finish 7th in 11.02, her 3rd fastest time ever following on her 10.96 personal best in the semi-final.