No holding back as titans clash in Class One Boys 100M 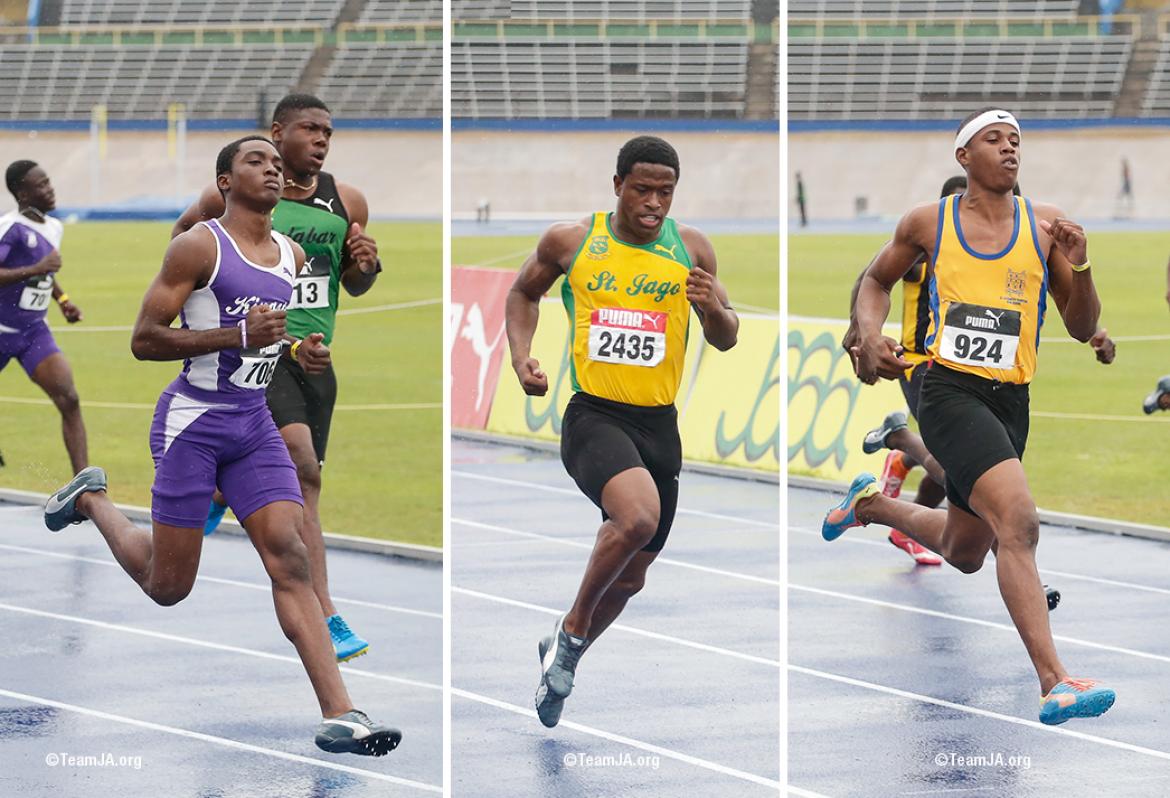 Fireworks are expected when the starter’s gun explodes for the much anticipated Class One Boys 100m final on the penultimate evening of the 106th staging of the ISSA/Grace Kennedy Boys and Girls Championships from the National Stadium in Kingston, Jamaica. The thousands that will be in the stadium and those watching at home and in the diaspora as well as those following the #TeamJamaica online coverage expect to see the three big guns of the 2016 schoolboy season bang in contention as the gladiators rush towards the line.

Many believe that, with the quality on show and given ideal sprinting conditions, the race will be decided in under 10.20 seconds, some even venturing to posit that Zharnell Hughes’ 2014 ‘Champs’ record (10.12) and the Jamaica National Junior mark held by Yohan Blake (10.11) will be removed from the books. Those expectations might be overly ambitious, but one thing is certain, the blue riband event of sprinting will generate the usual excitement. The main protagonists Nigel Ellis, Raheem Chambers and Jhevaughn Matherson have earned their status as the leading men. Each in his own way will be hunting a chance at personal redemption.

Ellis, STETHS’s iron man of sprinting, has been in superlative form all season and will be looking to show that he has matured as an athlete and ready to take on the mantle of the island’s top schoolboy sprinter. The 18 year old Ellis was 4th in 2015 in 10.68 (-2.6 m/s) behind the extraordinary Michael O’Hara (10.42) and Edward Clarke both of Calabar High as well as Raheem Robinson of Wolmer’s Boys’ School. Ellis returns while the medalists from last year have all moved on. The quarter-miler turned sprinter signalled that he would be a tough proposition for all comers with an eye popping and season leading 10.20 (1.9 m/s) to win the 100m title at Western Champs after a somewhat average start.

He scored an equally comfortable win over 200m (20.40) the next day and also won that event at the DIGICEL Grand Prix finals in just over 21.00 seconds in adverse sprinting conditions. Perhaps his most significant pre-champs race was his win in the U20 Boys 100m at the CARIFTA Trials where he clocked an impressive 10.26 seconds into a slight headwind, leaving none other than old rival Raheem Chambers in his wake. The win might have given the STETHS star athlete some sort of psychological advantage over Chambers but he and his handlers know that the race will be won on the night.

Raheem Chambers has been somewhat of an enigma this season and has only had two races over 100m, both coming at the CARIFTA Trials where he finished second to Ellis in 10.32, with seemingly a little more in the tank. The sparingly raced titan of St. Jago High’s male sprinters over the past three years, had some early season injury setbacks but seems to be back to or near his best. He goes into ‘Champs’ determined to exorcise the demons of 2015 where he finished a disappointing 6th in 10.68 after many had expected him to be a serious threat to O’Hara.

The Class Two 100m record holder has been ‘catching pigeons’ at training according to sources close to the St. Jago camp. They are expecting him to unleash his undeniable class on proceedings thereby joining the elite company of athletes who have won 100m sprint titles across all three boy’s categories at Champs. Chambers will have to be at his very best to turn the tables on Ellis who has beaten him in their last two big race clashes. He may find that even that could well not be enough to secure the title as he will also have to contend with another formidable foe in Kingston College’s resurgent warrior, Jhevaughn Matherson.

Many, especially the multitude of Kingston College supporters will not have fond memories of Matherson’s 2015 Champs campaign. Neither will the newly minted holder of the National Youth Best over 100m. After an injury plagued early 2015 and treatment overseas days ahead of ‘Champs’, the brave Matherson took his chances in the 200m where he pulled up in the semi-finals.

The sad images of him in tears and being consoled by a Kingston College team official flashed across the screen for all to see. That was a far ‘cry’ from the rapturous scenes in 2013 when he blazed the track with record runs while taking the sprint double in Class Three. The 17 year old, known as ‘Mr. Smooth’ by his inner circle, may have silenced doubters as to his well-being and readiness with a scintillating run to win the U18 title at the CARIFTA Trials.

His 10.25 (0.9 m/s) erased the previous National Youth Best (10.27) held jointly by Chambers and Jazeel Murphy. Incidentally, it was the second record held by Chambers over the distance that Matherson was eclipsing but he has never beaten the St. Jago athlete in a 100m final. The fortunes of Kingston College may rest heavily on the slender shoulders of Matherson and the fighter in him will want to give his school nine points in one of the marquee events of ‘Champs’ 2016.

He will face his biggest test to date and will have to put every foot right if he is to trump the twin-pronged challenge of Ellis and Chambers as well as potential finals spoilers like the talented Xavier Angus of Calabar High, Javoy Tucker of Wolmer’s Boys’, Waseem Williams of Jamaica College, Tasrico Bell of Vere Technical, Jelani Walker of St. George’s College, Matthew Brown of Cornwall College and Andre Morrison of St. Jago.