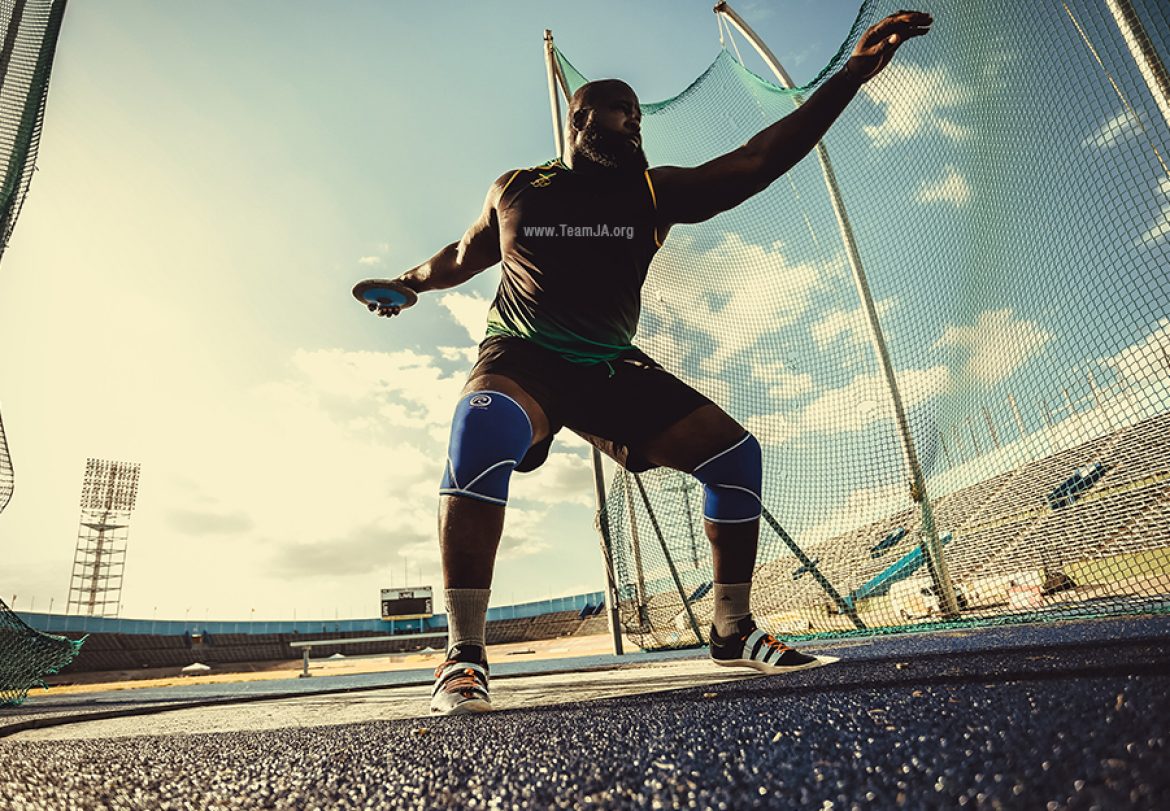 Is the Jamaica National Record Holder in the Discus being targeted by the local governing body for track and field? Check social media, particularly track and field fora and the answer appears to be a resounding yes. When the Jamaica Athletics Administrative Association (JAAA) named the provisional squad from Track and Field to represent Jamaica at the Rio Olympics , there was immediate outcry from many quarters at one ‘glaring’ omission.

Many had to scan the list several times to ensure that they were seeing correctly. Still no sign of the name Jason Morgan, the veteran Discus thrower and many times national champion who represented Jamaica at three IAAF World Championships and at the 2012 London Olympics. Morgan also represented the country with distinction at lower tier championships including the 2014 Commonwealth Games where he secured the Bronze medal, his best international showing to date.

The non appearance of his name on the list led some to also speculate that it must have been an oversight by the JAAA. After all, the affable and soft spoken Morgan, affectionately called ‘Dadz’ had achieved the automatic qualifying mark of 65.00m set by the world governing body, the IAAF. The 33 year old Morgan threw a personal best and national record 68.19m in June 2015 to easily surpass the qualifying mark. He is listed as one of two ‘nominated athletes’ from the National Olympic Committee (NOC) of Jamaica. The other being two time national champion Fredrick Dacres whose personal best 68.02m also took him well over the required mark.

Morgan like most of the athletes who hoped to gain selection for the Riob Olympics submitted his entry for the JAAA/Supreme Ventures National Senior Track and Field Championships used as Jamaica’s Olympic Trials. He showed up on the day of the competition thinking a top three finish would guarantee his spot or even if he finished outside the top three, as long as at least one of those in the top three did not attain the standard, then his ticket to his 2nd Olympics would be secure.

The Discus event promised a lot but did not deliver the lofty marks many had hoped for with none of the competitors managing to get beyond 63.00m. Dacres won with 62.27m ahead of Chad Wright (61.83m) and Travis Smikle (61.72m) to occupy the top three spots. Morgan was a disappointing 4th with a paltry 59.08m but would have taken comfort in the fact that two of the three who finished ahead of him had not made the standard. In his mind he had one foot on the plane and would be a near automatic selection if Smikle or Wright failed to get the qualifying mark by July 11, 2016 which marked the end of the qualifying period.

The question on everybody’s lips was why was Morgan not named to the team which was announced on Monday (July 11). The speculations and conspiracy theories were rife with support for Morgan’s inclusion spreading and the JAAAs President Warren Blake coming under fire for what many saw as an injustice meted out to the national record holder.

Others saw the decision as being inconsistent even hinting at vindictiveness. Dr. Blake stoked further controversy in his defence of the non-inclusion of Morgan. The JAAA President in response to queries from the media shortly after announcing the team, questioned the credibility of some of Morgan’s performances and his competitive value.

“Morgan did not finish in the top three, so he has no automatic place on the team. The history with Morgan is that he only throws the qualifying standard at a particular meet early in the season and he never repeats this, so it was the view of the selection committee that he shouldn’t be included. **There is a question about it (credibility) because he throws long distances at this meet every year – year in, year out and he never comes close at any other meet and if you look at his history it can be substantiated and he did not come in the top three so he has no claim for automatic qualification**,” Blake told reporters.

Many are of the opinion that Dr. Blake was being disingenuous perhaps treading on very dangerous ground with what could be viewed as disparaging remarks. Some were of the view that he had overstepped his authority as Morgan’s throw of 68.19m had been ratified by the IAAF, listed as the 2nd best mark of 2015, the best mark by a Jamaican and ranked the Jamaican National record holder as the 54th best Discus athlete ever. The mark was registered at the Peak Performance Classic in Pearl, Mississippi, USA, a meet that is sanctioned and certified by United States Track and Field (USTAF).

Morgan’s 2016 best of 63.11m was set at a meet in Ruston, Louisiana. His best efforts since 2009 have been registered at meets in Louisiana or Mississippi and have all come on or before June 6 of each year. In his defence Morgan reiterated that a lack of sponsors and the financial wherewithal meant he could only compete at those lower level meets that many unattached athletes used to get much needed competition.

The 2014 Commonwealth Gold medalist in an exclusive interview with Team Jamaica tried his best to portray optimism.

“I am hoping things can turn for the better. I am genuinely pleading with the JAAA to please make a positive change. Add me to the team cause I have earned my spot. Do the right thing. I will do the right thing to continue to represent Jamaica the best I can as i have been doing since the age of 18 years old”, Morgan said.

It is not the first time that ‘controversy’ has reared its ugly head regarding Morgan’s selection to represent Jamaica at a global championship. In 2013 he missed the JAAA National Senior Trials as he was to be sworn in as an American citizen and did not have his travel documents for the June 20-23 event held at the National Stadium. The Dr. Blake led JAAA rejected Morgan’s appeal for an exemption and adopted a hardline stance.

“There are exemptions from the JAAA if an athlete is not able to compete at Trials, but his reason does not fall into the criterion and the rules are clear There is no case to be made for him, he must come to Trials and he did not, so we can’t choose him,” Blake reportedly told reporters back in 2013 when asked to explain Morgan’s non selection for the team to the IAAF World Championships in Moscow, Russia. On that occasion Morgan was the only Jamaican to have achieved the ‘B’ qualifying distance.

Many are also of the view that Morgan’s tearful plea for assistance for himself and other athletes in 2015 after the Beijing World Championships may have embarrassed Dr. Blake and the JAAA and could in some way have influenced the decision not to select him. Morgan and other athletes had bemoaned the lack of support from the JAAA for struggling athletes.

In another interesting development, Morgan has come in for support from several lawyers sympathetic to his cause. Reports are that lawyers representing the embattled Morgan have written to JAAA serving notice of their intention to appeal his non-selection to the provisional team to the Rio Olympics before the Court of Arbitration for Sport (CAS). It was further reported that the lawyers advised of their intent to file the appeal by July 13 and have the matter heard by video conference before a sole arbitrator on either July 16 or 17 with a decision to be made by July 18. *(Courtesy of SportsMax)*

In an interview on a local news discussion program, a somewhat evasive Morgan refused to confirm any action on his behalf by the lawyers choosing only to acknowledge the support.

One supporter Eroll Walters started a petition on the Change.Org website. The petition entitled “Jason ‘Dadz’ Morgan should be on the Jamaica Team to Rio 2016” was addressed to the Honourable Olivia ‘Babsy’ Grange, the Minister with responsibility for Sports. Over 500 persons had signed the petition.

The deadline for submission of the final list of selectees for the Jamaican team to Rio is July 18.