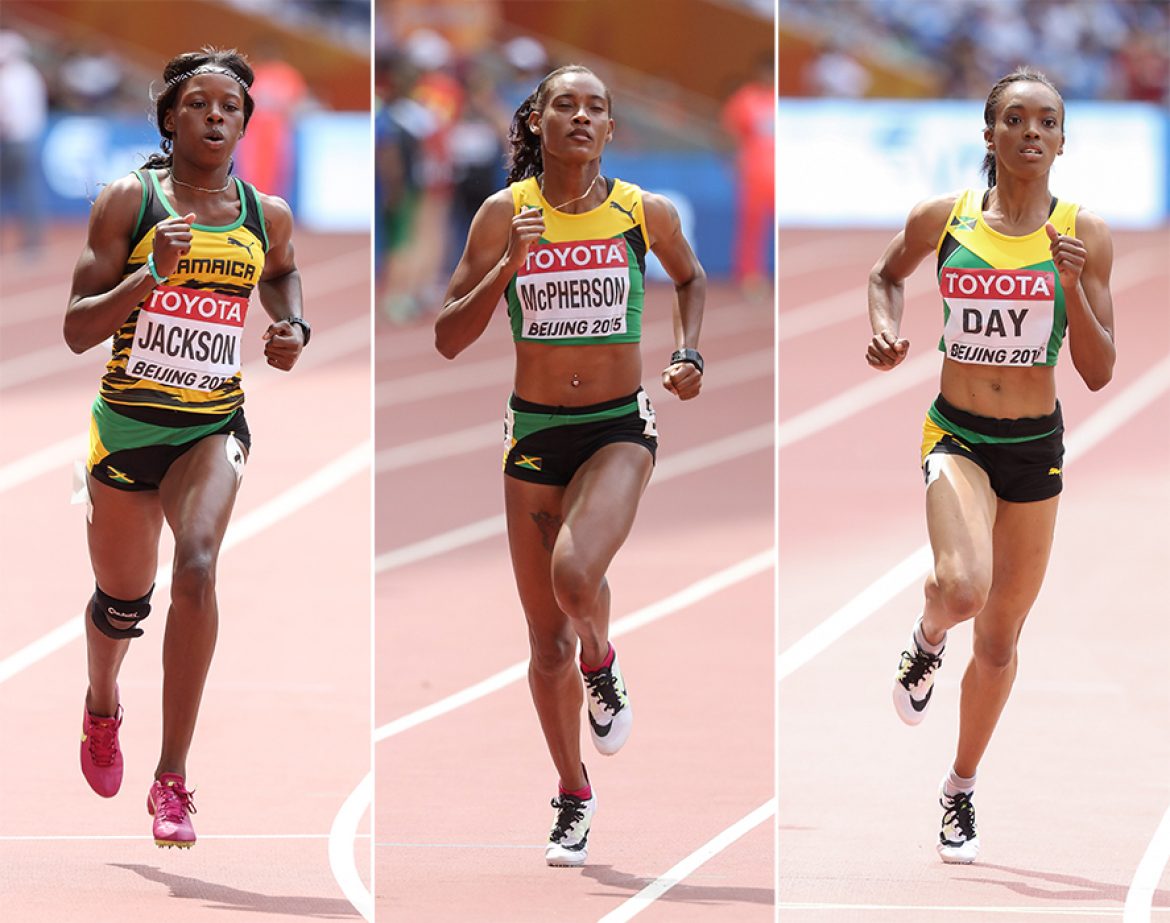 The Women’s 400m final in Rio could see Team Jamaica and the USA accounting for six of the eight finalists. The two countries will be well represented with six of the seven fastest women expected to face the starter when the preliminary round heats get underway later today (August 13).

At the 2015 World Championships in Beijing , Jamaica’s representatives in Rio were part of an historic four-pronged attack that Jamaica launched in a bid to win a first senior 400m global title for women. It was the youngest of them all, Shericka Jackson that made it to the podium, securing Bronze in a personal best 49.99 behind Allyson Felix and Shaunae Miller.

The outstanding 22 year old is once again armed for battle, this time to represent Jamaica on the biggest stage of them all, the 31st Olympiad in Rio De Janeiro, Brazil. She will be joined by Christine Day who was 4th in Beijing and national champion, Stephanie Ann McPherson who was 5th in that historic final.

The former Vere Technical High standout has made a smooth transition to the senior ranks and could once again continue that upward trajectory with a place in the Olympic finals on her 1st attempt. Jackson is the 3rd fastest of the Jamaican trio in 2016 with her season best 50.42 coming in the finals of the event at the Olympic Trials in Kingston on July 3. She is the 7th fastest of the Rio bound quartermilers.

Christine Day has become a fixture on national teams and is expected to push for a place in the finals. Day, a past student of Tacky High in St. Mary switched from the powerful MVP Club to the fledgling Cameron Blazers and has not lost any of that dogged determination. She will also be motivated by the exploits of clubmate Tiffany James who became the first Jamaican female to win a 400m title at the global level with her triumph at the U20 World Championships in Poland earlier this summer. Day who is a few weeks shy of her 30th birthday is participating in her 2nd Olympics. She ran a fighting 50.29 for second at the Jamaican Trials and is the 6th fastest of the Rio 400m field.

McPherson has arguably been Jamaica’s most consistent 400m runner since 2013 with appearances in the last two IAAF World Championships final split by Commonwealth Games Gold in 2014. The 27 year old McPherson who hails from Westmoreland and the Mannings School appears, at least on the basis of her 2016 performances, to be Jamaica’s best medal prospect. She is the 4th fastest of the field with her season best 50.04 which she ran to win the Jamaican Trials. McPherson has done well on the circuit this year and could be challenging for a podium spot.

While the Jamaicans possess the requisite abilities to contend for medals, the race could prove to be a blockbuster showdown between Bahamian Shaunae Miller and one of the most decorated female athletes in history, American Allyson Felix. Miller will be looking to turn the tables on Felix who beat her at the 2015 World Championship. The 22 year old Bahamian is in the form of her life and is the fastest quarter-miler in 2016 with 49.55.

Felix who won the 200m at the London Olympics, appears to have recovered from early season injuries and will have extra motivation having failed to qualify for the 200m in Rio. The American showed guts and class at the US trials to win despite an ankle injury. She clocked a then world leading 49.68 and will not be easily denied a 2nd global title over the distance. Her teammates Phyllis Francis (49.94 SB) and Natasha Hastings (50.17 SB) should also make the finals.