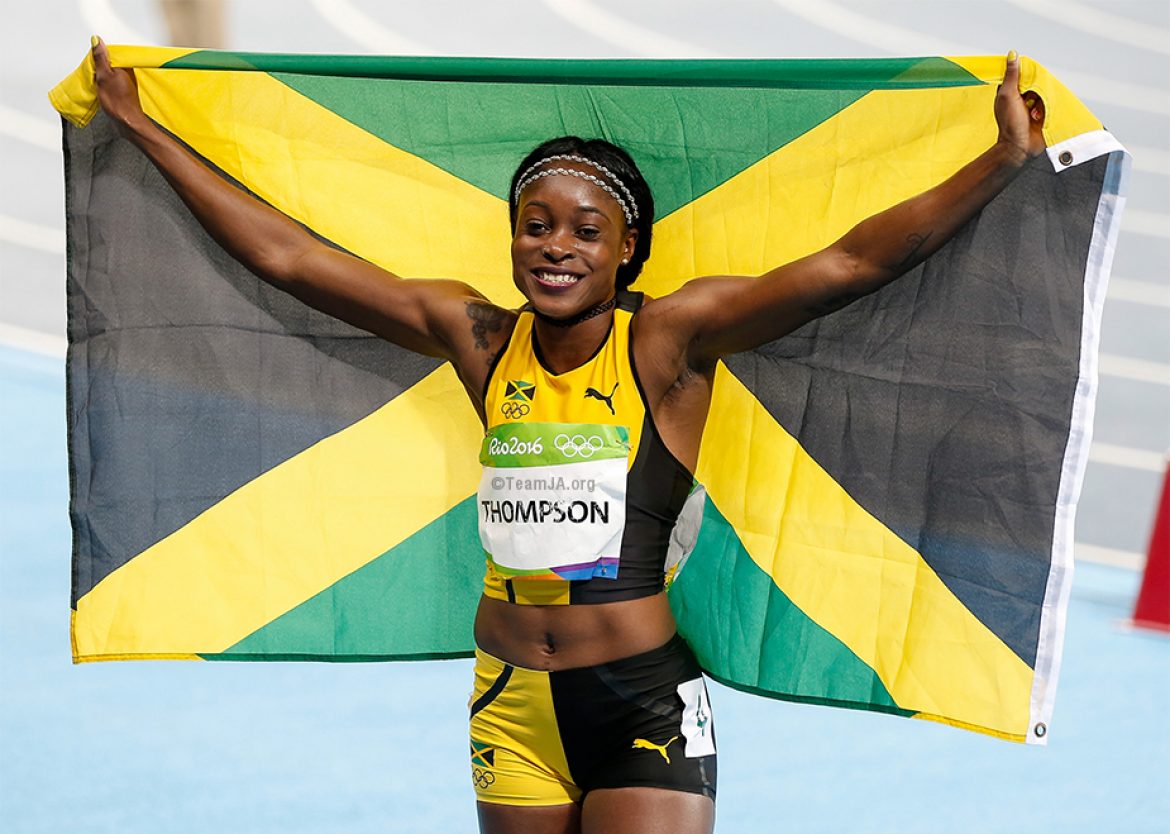 The 24 year old from Banana Ground in Manchester left no doubt as to who is the world number one with a scintillating performance to win the 100m at the 31st Olympiad in Rio De Janeiro, Brazil.

In arguably one of the best fields ever assembled for a women’s final at the Olympic Games, Thompson who had served notice all season that she was the one to beat decimated the strong field to win in 10.71 (+0.5). It was the fastest wind legal time recorded in an Olympic final and second fastest ever behind Florence Griffith-Joyner’s 10.54 (+3.0) to win the title at the 1988 Olympics. The quality of the performance was reflected in the fact that seven of the eight finalists ran sub 11 times, surpassing the previous best of six that did so in London 2012.

Thompson who ran out of lane 4 got off to a good start to be up with the leaders which included the fast starting pair of two time defending champion Shelly-Ann Fraser-Pryce and the vastly improved Marie-Josee Ta Lou of the Ivory Coast. She was devastating in the last half of the race unleashing a decisive kick that saw her accelerate away from the quality to field to win Jamaica’s third consecutive Gold medal in the event at the Olympics.

It was one of the most devastating performances seen in a global 100m final and her time was a fraction below the 10.70 clocking to win the Jamaica Trials. Thompson gave an inkling of what was to come with a smooth 10.88 in heat three of the semi finals where the American champion English Gardner was a mere spectator. After that performance it was the consensus of many that she was the one to beat in the final and she duly obliged with consummate ease.

An understandably overjoyed Thompson celebrated with several leaps into air and sprinted across to her illustrious teammate and training partner when it became clear that Jamaica had secured a second podium spot. Thompson in interviews following her breathtakingly beautiful display told reporters that even when she ‘saw that she was clear, she didn’t know quite how to celebrate.’ The former Manchester High standout paid homage to Fraser-Pryce citing the latter’s difficult season and describing her as a ‘role model and inspiration’.

The fast finishing American Torie Bowie in lane 5 got up in the nick of time to overhaul a fading Fraser-Pryce and Ta Lou to secure the Silver in 10.83. Bowie who was also a medalist at the 2015 World Championships also had a reasonable start and kept pace with the front runners but was no match for Thompson who had by now flown the coop.

Fraser-Pryce, the sentimental favourite if only for the fact that she was chasing Olympic immortality, ran a gallant race in defeat especially considering her well documented struggles with a toe injury. The two time champion held on resolutely to earn the Bronze medal ahead of Ta Lou in a photo-finish by 0.007, 10.852 to 10.859. It was Fraser-Pryce’s fastest time of the season and her slowest time ever in an Olympic final following her 10.78 in Beijing and 10.75 four years ago in London.

The ‘Pocket Rocket’ as she is known ran brilliantly in the semi-finals (10.88) to comfortably defeat the much hyped high-flying Dutchwoman, Dafne Schippers. Though she eased at the end, there was much reason for concern given the level of discomfort caused by the toe injury and evidenced by the pained expression on her face.

A very gracious Fraser-Pryce was quoted as saying “What I’m most happy about is that the 100m title is staying in Jamaica. I’m on the podium with my training partner. I’m proud of Jamaica – just look at my hair (which was coloured the green and gold of the Jamaican flag).”

Schippers finished 5th in 10.90 ahead of Michelle-Lee Ahye (10.92) and the disappointing Gardner (10.94) who was feeling the wrath of Thompson for the 4th time this season. Team Jamaica’s 3rd representative in the final, 21 year old Christania Williams experienced a bit of cramping and finished 8th in 11.80. Williams who two years ago was the Class One winner at the prestigious Boys and Girls ‘Champs’ recorded a personal best 10.96 to qualify for the final as one of the fastest losers.

Thompson, Fraser-Pryce and Williams are members of the MVP Track Club and coached by the legendary guru Stephen ‘Franno’ Francis who was winning his third 100m title as coach and 4th individual Gold medal overall. Team Jamaica has dominated the event since 2008 winning seven of a possible nine medals. For the second consecutive Olympic Games the Jamaicans were split by an athlete from perennial rivals the USA. In 2012, Carmelita Jeter secured the silver ahead of another of Jamaica’s sprint sweethearts, Veronica Campbell-Brown.

It was the 3rd Olympic Gold medal and 1st individual Gold won by an athlete with roots in the Banana Ground District of Manchester. Nesta Carter who also attended Manchester High School was a member of the record-breaking teams which won the 4x100m relays at the 2008 Beijing Games and the 2012 London Olympics.