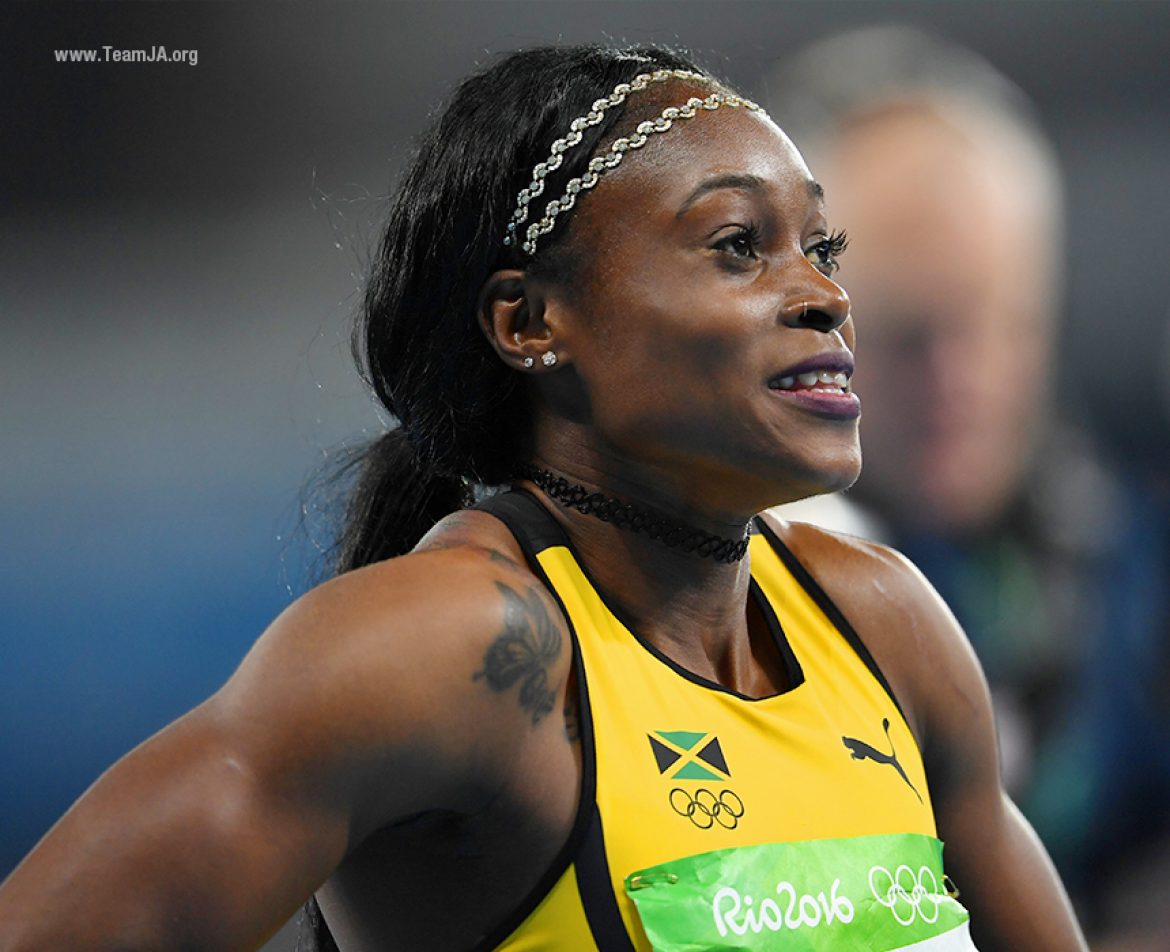 In Latin her high school motto is *Sic Luceat Lux* translated ‘Let Your Light So Shine’. On Wednesday night in Rio, 24 year old Elaine Thompson, a past student of Manchester High, again let her light shine, a golden illumination marking her coronation as the best female sprinter in the world.

Thompson who on Saturday (August 13) decimated a strong field to win the 100m, returned over the 200m to score a spectacular and emphatic win over an equally strong field. Among the vanquished elite was Dafne Schippers whose storming run had denied Thompson the Gold at the 2015 IAAF World Championship. It was sweet revenge for the latest sprint star to emerge from Jamaica’s seemingly never ending production line of sprinting excellence.

The 100m champion started like a bullet from a shot gun and opened up a decisive lead on rivals with a super curve run. She lengthened her strides impressively and was not for catching as she thwarted a sustained last 50m challenge from Schippers. It was a brilliant gate to wire demonstration that literally floored the Dutchwoman whose desperate lounge caused her to lose balance before tumbling to the chevron track after crossing the finish line.

The winning time was 21.78, the 2nd fastest for the Jamaican. The margin between her and Schippers who ran a season best 21.88 may be just .10 but so fantastic was the execution and dogged determination as the Dutchwoman loomed, that it looked like a gap of ‘chasmic’ proportions.

American Torie Bowie who was 2nd in the 100m, copped her second medal with a strong finish for 3rd in 22.15. Marie-Josee Ta Lou repeated her 100m showing as she finished 4th in 22.21 (national record). Dina Asher Smith of Great Britain (22.31) and Michelle-Lee Ahye of Trinidad and Tobago (22.33) rounded out the top six.

Thompson created history by becoming the first Jamaican woman to win the coveted sprint double and the first woman to achieve the feat since Florence Griffith Joyner did so in 1988. Marion Jones won both in 2000 but that was scratched from the history books after the American confessed to doping and was stripped of her titles.

Thompson’s superlative performance was watched and cheered on by a jubilant crowd gathered before a large screen mounted in her home district of Banana Ground in Manchester. The overjoyed supporters included her grandmother who raised her, a proud father, other relatives, local politicians and well wishers who were determined not to miss the latest instalment in Thompson’s meteoric rise from obscurity to sprinting superstardom.

After her narrow loss to Schippers in 2015, Thompson’s coach Stephen ‘Franno’ Francis indicated that his charge lost her composure as Schippers closed on her and that once she maintained her discipline and ran through, the result would be different. When Schippers came a calling this time around, close up replays showed the Jamaican gritting her teeth and biting her lips as if to say ‘not this time Dafne’. It was a stinging defeat for the Dutchwoman who was expected to prevail over what is considered her better event.

Thompson joins the much decorated sprinter Veronica Campbell-Brown as Jamaican Gold medalist over the half lap event at the Olympics. The win also made her the third Jamaican woman to win two individual Gold medals joining Campbell-Brown (2004 and 2008) and outgoing 100m champion Shelly-Ann Fraser-Pryce (2008 and 2012).

It is a very special and welcoming feeling for me. I think my light has shined. Watching Veronica Campbell-Brown, Shelly-Ann Fraser-Pryce and then putting my name there is an amazing feeling,” a super elated Thompson told BBC Sports as the magnitude of her accomplishment finally sunk in.

It was a command performance that drew the following comment from Michael Johnson, the four-time Olympic Gold medalist who is doing commentary for BBC in Rio.* “Elaine Thompson never focused on the competition, just her own race. Very efficient but ultimately there was never ever any competition for Elaine,” *Johnson said in his analysis of the Jamaican’s performance.

Team Jamaica has won 10 of the past 11 Olympic golds in the 100m and 200m, with Usain Bolt the overwhelming favourite to extend that record in Thursday’s men’s 200m final. Thompson’s amazing win was the 4th Gold medal so far at the Rio Olympics for the undisputed sprint capital of the world and the 6th overall at the 31st Olympiad.