28 Medals for Jamaica on Opening Day of CARIFTA Games 2017 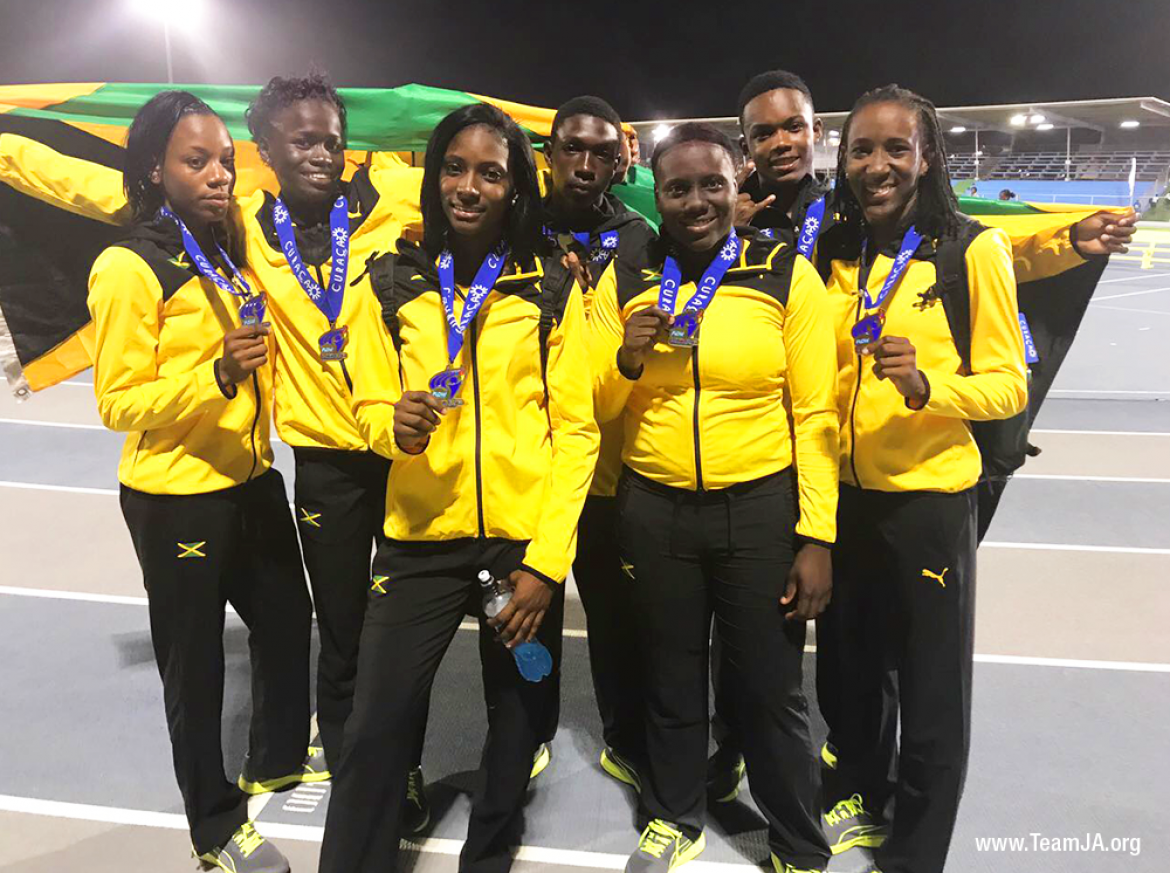 Dominating proceedings is nothing new to Team Jamaica at the CARIFTA Games and for the most part things went according to script on Day One of the 46th edition in Willemstad, Curacao. The Black, Green and Gold standard-bearers amassed 28 medals on the opening day including 12 Gold, 10 Silver and 6 Bronze.

Pride of place went to throwers Roje Stona and Fiona Richards who were in record breaking form. Stona broke U20 Boys Discus Throw record with a mark of 66.41m to lead home compatriot Kevin Nedrick (60.38m) in what was one of six ‘quinellas’ on the day for the all conquering youngsters from Area Code 876. The impressive Richards was not to be outdone and was at her brilliant best in the Girls U20 Discus with four throws over 54.00m, moving the record to 54.19m. Teammate Gabrielle Bailey finished 5th with 45.47m.

Team Captains Junelle Bromfield and Christopher Taylor led their troops from the front winning their respective U20 400m races with consummate ease. Bromfield showed her class in winning in a decent 53.82 with teammate Kimorla Mushette (55.62) narrowly missing out on the Silver medal after the times were rounded down to the thousandth of a second. Taylor secured yet another CARIFTA Gold with an effortless win in 45.97. Jamaica’s other entrant in the race, Dashawn Morris was 4th in 47.60.

It was a clean sweep for Jamaica in the 1500m with the athletes occupying the top two spots in three of the four races. Renardo Johnson won the U18 boys event in 4.09.74, having enough time to engage in a bit of ‘showboating’ with teammate Tyrese Reid who was 2nd in 4.09.87.


Kevona Davis recovered from a horrible start to win the U18 girls 100m. Davis who was left in the blocks closed like a runaway train to secure Gold in 11.62. Fast starting US-based Jamaican Brianna Williams faded a bit but held on for the Bronze in 11.80.

Aneka Brissett continued her brilliant season, pushing the big favorite Khalifa St. Fort of Trinidad & Tobago (11.56) all the way to finish 2nd in 11.57. Kashieka Cameron narrowly missed out on getting a second medal for Jamaica in the event clocking a respectable 11.74 for fourth.

Tyreke Wilson and Jelani Walker overcame very slow starts and did well enough to earn medals in the U18 and U20 Boys 100m final. Wilson was a fast finishing 3rd in 10.69 while Walker perhaps distracted by a series of false starts came from off the pace to also grab 3rd in 10.61.

Tissanna Hickling cut the sand at 12.87m for Silver in the U20 Girls Triple Jump with Myesha Nott (12.32) missing out on a medal in 4th. In the U18 Girls Shot Put Danielle Sloley copped the Silver medal with a throw of 14.12m. Shaday Hudson finished 5th with 13.31m.

Newly minted National Junior record holder Kevin Nedrick secured the first of his two medals with a best of 58.33m for Bronze in the U20 Boys Javelin. The Jamaicans were out of the medals in the U18 Boys Long Jump with Safin Wills (4th) and Terrol Wilson (15th).