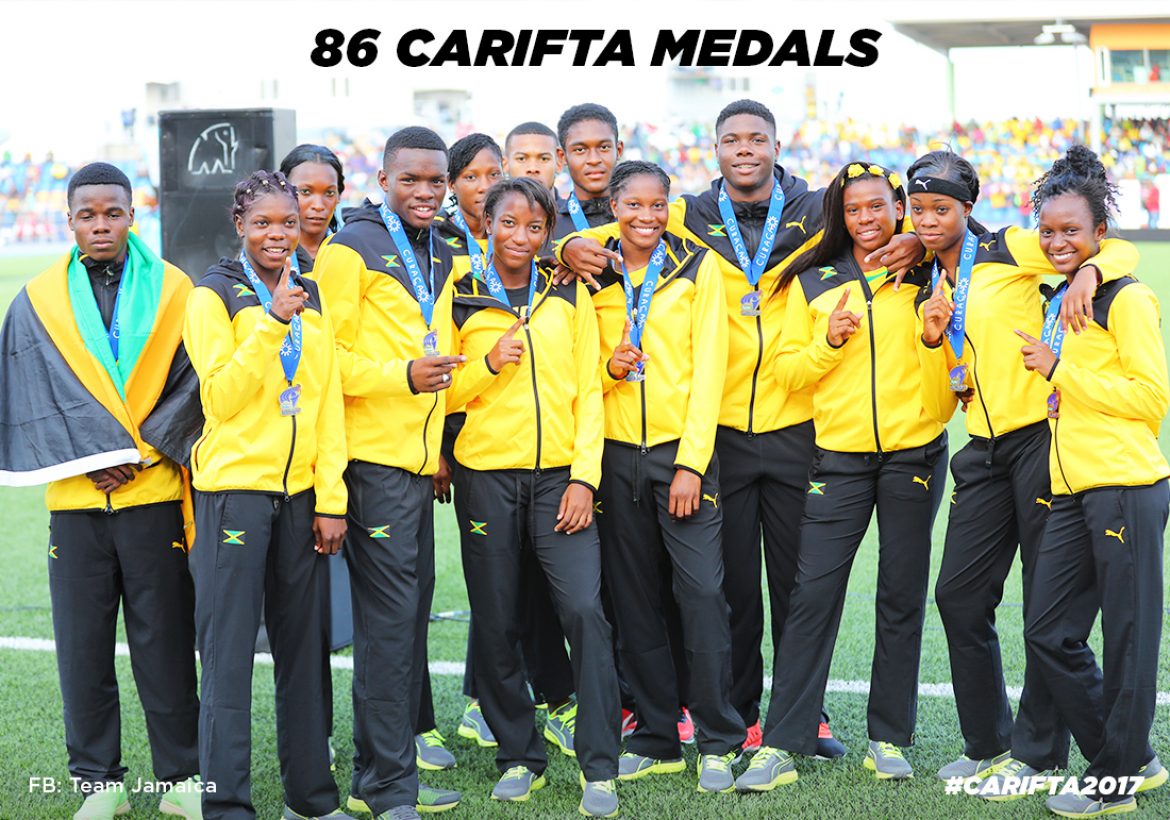 It was the expected avalanche of medals on the closing day of the 46th CARIFTA Games in Curacao as Team Jamaica secured another 32 medals to equal the 2016 haul of 86. The medal chest contained 39 Gold, 28 Silver and 19 Bronze.

Daniel Cope of Jamaica was responsible for a second championship record when he threw 61.25m to win the U18 Boys Discus Throw. Cope bettered the 2016 mark of 60.44m set by another Jamaican, Phillipe Barnett. Cobe Graham, Jamaica’s other competitor in the event secured Bronze with a mark of 52.71m.

Kevin Nedrick closed his CARIFTA Games career with a full set of medals. Nedrick who won Bronze in the U20 Javelin and Silver in the Discus returned on the final day to win Gold in the U20 Boys Shot Put as Jamaica claimed yet another quinella. Nedrick’s 19.29m saw him finishing ahead of teammate Kyle Mitchell (18.72m).

For the second consecutive CARIFTA Games, Team Jamaica swept the sprint hurdles events. Britany Anderson was expected to obliterate the U18 Girls 100m hurdles record held by compatriot Janeek Brown and she delivered in style leading another Jamaica 1-2. Anderson clocked a smart 13.16 (-2.1m/s) for Gold ahead of defending champion Daszay Freeman with 13.38.

Janeek Brown had a front seat view of her U18 record being erased from the books by Anderson and was determined to win in her first race at the U20 level. This was not to be as she was out-finished by fellow Jamaican Amoi Brown in a very exciting contest. Amoi came out on top in the battle of the Brown’s winning in 13.43 over Janeek 13.49.

De’Jour Russell false-started in 2016 and was the big favourite to set things straight this year in the U18 Boys 110m Hurdles. Russell did not disappoint as he spread-eagled the field to take Gold in 13.18 (2.4m/s). His teammate Jeremy Farr took the Bronze medal in 13.70.

The much-improved CARIFTA Games debutant Orlando Bennett ensured that Jamaica completed the sprint hurdles sweep when he raced to his second fastest time ever of 13.59 (1.0m/s) to win the U20 Boys 110m hurdles. Alex Robinson of Team Jamaica secured the Bronze medal in a personal best 13.71.

Cemore Donald does not know how to lose finals and kept that record going with a successful defence of her U18 Girls 800m title. Donald completed the event in 2.11.27 and as it has been all season Shaquena Foote followed her home in the runner-up spot. Chrissani May who was runner up to Donald in the U18 category in 2016 made no mistake in her first attempt in the U20 division. May won with a time of 2.12.42. Kara Grant followed up her 2nd place finish in the 1500m to secure the Bronze in 2.17.20.

Kimar Farquharson has been unbeaten in 800m finals this season and kept that record intact with a win in the U18 Boys 800m. Farquharson (1.54.64) led yet another Jamaican 1-2 at the Games with Tyrese Reid (1.54.78) getting his second Silver medal of the Games. Favourite Jonathan Jones of Barbados thwarted Jamaica’s bid for a sweep of the 800m by taking Gold in the U20 category in 1.52.06. Jamaica’s Agerian Jackson ran a brave race to take the Silver in 1.52.06. Ackeen Colley had somewhat of a difficult race and did not finish.

Tissanna Hickling who took Silver in the Triple Jump went one better in the U20 Girls Long Jump. Hickling cut the sand at 6.22m to win while teammate Lorean Murray was 5th with a best effort of 5.77m. Lotavia Brown and Lamara Distin won their second medals of the Games. Brown followed up her 3rd place effort in the Long Jump with a win in the Girls U18 Triple Jump ahead of Distin who secured another Silver medal.

Sanique Walker, Shaquena Foote, Joanne Reid and Kimara Francis combined to make short work of rivals to win the Gold medal by a very wide margin in the U18 Girls 4x400m. The Jamaican quartet cruised home in 3.38.72 ahead of the Bahamas (3.41.23) with Trinidad and Tobago well back in third.

The U20 Girls were never in danger of defeat with the medal rich team of Kimorla Mushette,Nicolee Foster, Shiann Salmon and team captain Junelle Bromfield turning the mile relay into a procession. The quartet won by the proverbial city block in 3.37.95. Some distance away in 2nd was the Bahamas (3.50.37) with The British Virgin Islands (3.53.03) taking the Bronze.

The Jamaicans were widely expected to win the final track event of the 46th CARIFTA Games but this was not to be in what was an eventful U20 Boys 4x400m relay. The team of Malik Smith, Timor Barrett, Dashawn Morris and Christopher Taylor failed to defend their title and had to settle for Silver behind a determined Trinidad and Tobago whose anchor leg runner dug deep to hold a gallant Taylor at bay.

The 400m champion had a 70m or so deficit to make up after a very poor first exchange allowed Trinidad and Tobago to open up a wide gap. Taylor pulled alongside his Trinidad and Tobago rival who strategically carried the Jamaican wide and may have made slight contact. Taylor stumbled and lost momentum allowing Trinidad and Tobago to score an upset win in 3.09.32. Jamaica was second in 3.10.33 with the Bahamas getting the Bronze in 3.18.02.