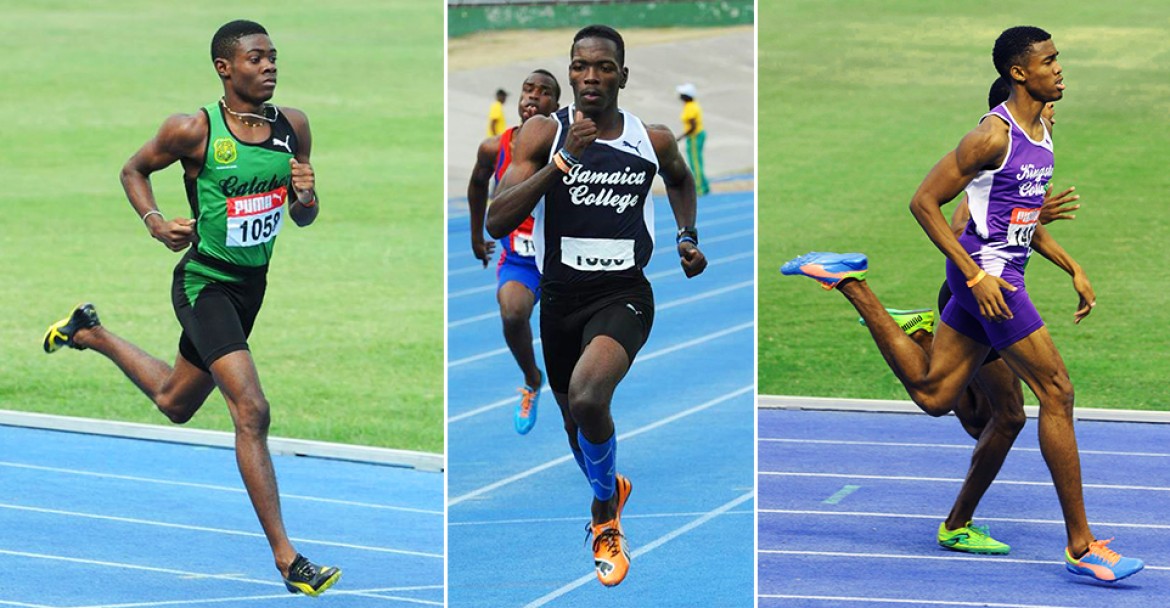 In 2014 when Javon Francis decimated Usain Bolt’s Class One Boys 400m record, many saw it as a potential rebirth for Jamaica which has a rich heritage in the event. His 45.00 seconds flat left tongues wagging and was undoubtedly one of the performances of the meet perhaps only topped by Jaheel Hyde’s breathtaking 49.49 over 400m hurdles.

Fast forward a year later and the one lap flat event is again the talk of the town and even more so given the mindboggling exploits of Calabar High School phenom Christopher Taylor who left those in attendance staring at the clock in disbelief with a 45.69 clocking at the CARIFTA Trials, a World Youth Best for a 15 year old. Taylor had he not eased some 15m from the finish could have gone even faster. The unassuming Taylor has promised to leave it all on the track on March 28th. If that happens that World Youth Best will be obliterated.

Some twenty minutes later it was the turn of Akeem Bloomfield of Kingston College to stun fans with another scintillating run, stopping the clock at 45.41, the third fastest time by a Jamaican junior. The 17 year old Bloomfield who confessed to not liking the event was running 400s to build his endurance for an assault on the 200m at ‘Champs’. So good was his performance that his Coach Neil Harrison is seriously contemplating entering Bloomfield in the event at ‘Champs’. Bloomfield has the capacity to deliver something special and Davian Clarke’s National Junior Record of 45.23 could be under serious threat.

Not to be outdone, Twayne Crooks of perennial title contenders Kingston College not surprisingly raced himself into the sub 46 schoolboy club with a facile 45.93 clocking to win the 400m at GC Foster Classics on March 14. Crooks has a lot of scope and looks set to run even faster at Champs.

Martin Manley knows what it is like to run sub 46, having done so two years ago to win the World Youth title. He is yet to replicate that achievement but so good is he that if fit, his 45.87 Personal Best could be easily eclipsed. His St. Jago High counterpart Nathon Allen has looked silky smooth this season and also looks set to enter the rarefied sub 46 air.

Devaughn Baker of Jamaica College is another athlete with the pedigree to break the 46 second barrier. The Class Two record holder will no doubt have a front seat view when Christopher Taylor removes his name from the record books and this may serve as the motivation Baker needs to challenge his more fancied rivals for the 400m title, a race he will in all probability have to run well below 46 seconds to win.