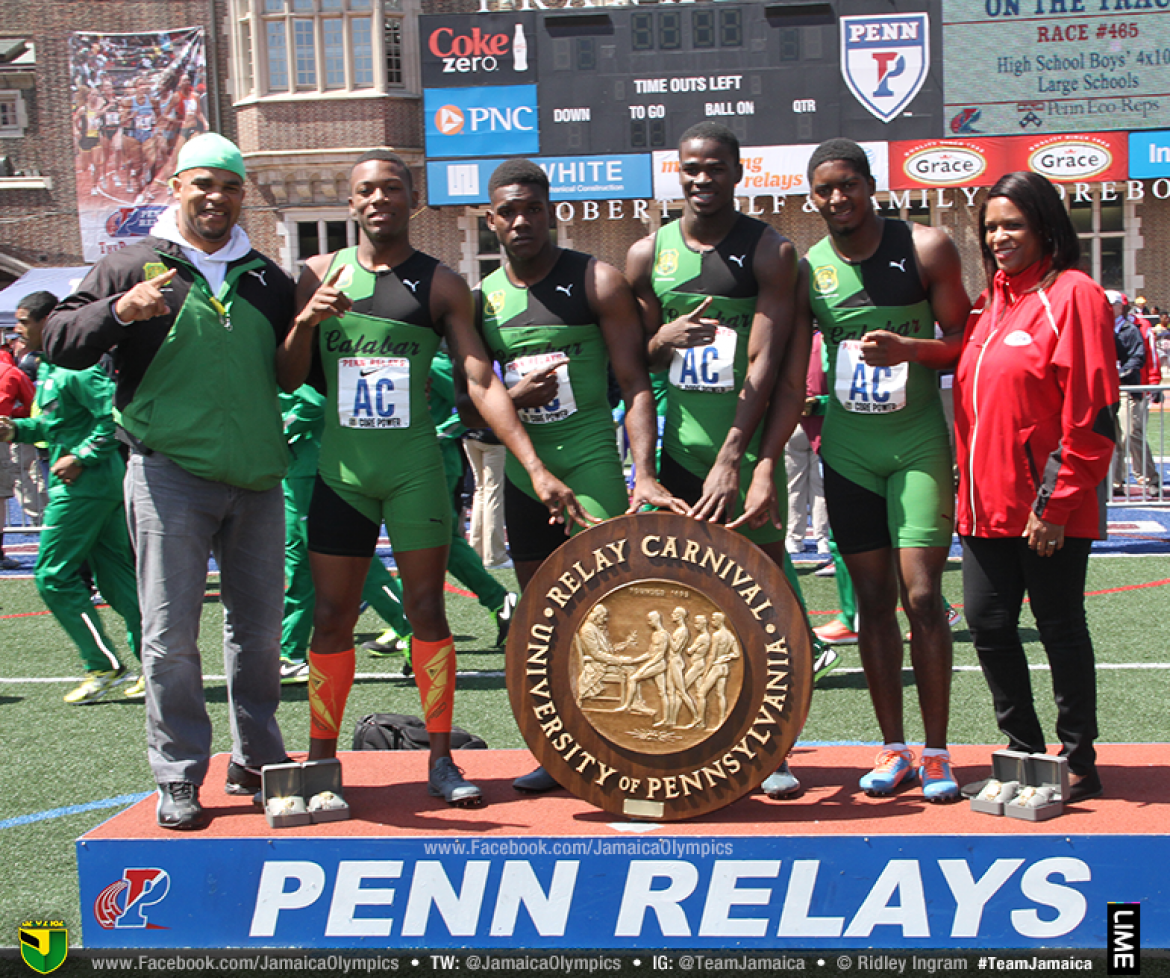 The ‘lifting’ of the ban on Michael O’Hara gave the Jamaicans present at the Franklin Field Stadium and those watching and following worldwide the opportunity to see this remarkable athlete demonstrate why he is seen by many as one of the heirs to the throne of Jamaican sprint stardom. The gifted O’Hara showcased his class firstly in the 4x100m High School Boys Championship of America event with another of his now famous blistering back stretch runs as the invincible Calabar High School picked up from where they left of at ‘Champs’ and the ‘UTech Classic’ with a record-breaking run to win in 39.63, erasing the 1 year old mark set by Jamaica College.

O’Hara, Zandre Blake and the dynamic duo of Jullane Walker and Seanie Selvin won ahead of a gallant St. Jago (39.89), St. George’s College (40.17) and STETHS (40.42) as Team Jamaica swept the first four places. It was somewhat of a bittersweet moment as Kingston College, the 5th Jamaican high school in the event did not finish after star quarter-miler Akeem Bloomfield on the 2nd leg appeared to pick up an injury. We wish young Bloomfield a speedy recovery ahead of the May 9th Jamaica International Invitational.

O’Hara was back at it in the 4x400m High School Boys’ Championship of America final running a fast split in leading the high-riding 2015 ‘Champs’ winners Calabar High (3.09.97) to an emphatic win over Jamaica College (3.11.23) and STETHS (2.12.73) as Jamaican high schools swept the top 3 spots. Excelsior High and Petersfield High were 6th and 7th respectively as Kingston College did not face the starter. O’Hara, for his brilliant performance was named High School Boys Penn Relays Athlete of the Meet – Relay Events.

STETHS capped a very successful Penn Relays journey with a narrow but decisive win in the 4x800m High School Boys’ Championship of America race. Jauvaney James on anchor was resolute as the boys from Santa Cruz crossed the line in 7.38.38 to beat the luckless but brave Kingston College (7.38.54) with work-horse Twayne Crooks on anchor. The other members of the winning STETHS team were Romario Guthrie, Shemar Salmon and Paul Tate.

Marvin Williams of STETHS was another standout performer for Team Jamaica. The 2013 World Youth Champion over 400m Hurdles was very impressive in winning his pet event in 51.11, the 4th fastest time ever done at the Penn Relays. Williams who also ran the first leg for STETHS in the 4x400m Championship of America relay was named High School Boys’ Penn Relays Athlete of the Meet – Individual Events.

Jullane Walker of Calabar High capped an outstanding 2015 Penn Relays by winning the High School Boys’ Long Jump with a mark of 7.45m ahead of Travis Riley also of Calabar High (7.34M) and Alrick Ottey of Cornwall College (7.16M) as Jamaica swept the top three positions. Gavin Gibson of Kingston College (6th), Paketo Dudley of Jamaica College (9th) and Teddale Simpson of Cornwall College (11th) were the other Jamaican participants.

Team Jamaica had the top five places in the High School Boys’ Triple Jump. The event was won by Odaine Lewis of Cornwall College (15.37M) over Obrien Wasome of Jamaica College (15.28M) and Jordan Scott of Campion College (15.19M). Javier Lowe of Calabar High and Errol Ennis of Kingston College rounded out the top 5.