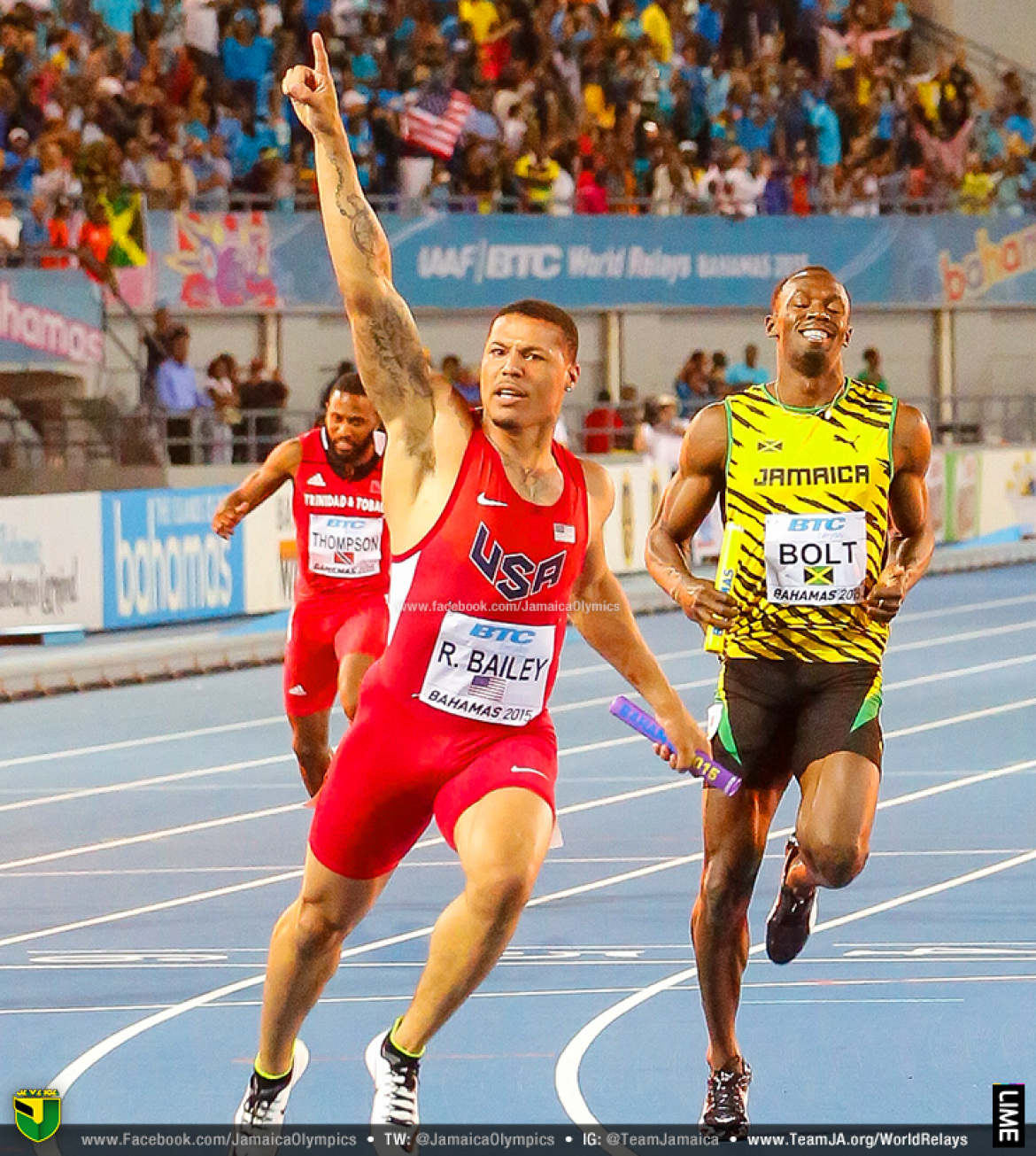 American sprint relay anchor Ryan Bailey has graced the National Stadium track in Kingston in the past and if things go according to plan will do so again at the Jamaica International Invitational World Challenge meet on Saturday, May 9. Bailey who weeks ago confirmed his participation, is likely to contest the 100m where he will face rivals including Asafa Powell. After his post 4x100m relay theatrics at the World Relays, one wonders if he will receive a ‘warm’ Jamaican welcome.

When Jamaica won the Men’s 4x200M at the 2nd IAAF World Relays in Nassau, Bahamas, it was clear that the athletes wanted to make a statement to the USA Men and in particular 4x100m relay anchor Ryan Bailey. While on the podium for the medal ceremony the quartet of Warren Weir, Jason Livermore, Rasheed Dwyer and Nickel Ashmeade did Usain Bolt’s signature ‘Lightening Bolt/To Di Worl’ pose in an obvious show of support for the triple world record holder who decided not to run the finals after complaining of a sore hamstring.

The Jamaican athletes and one in particular, Warren Weir was seething after the celebratory antics of Bailey who had anchored his team to a famous victory over Team Jamaica in the 4x100m on Day 1 of the World Relays. It was the first time in 7 years that the USA men were beating the world record holders in the sprint relay at a global meet. Bailey, obviously exuberant and with the crowning moment of a victory over the Usain Bolt – anchored Jamaicans, did his version of the ‘Lightening Bolt/To Di Worl’ pose then went a bit further with a ‘slit throat’ gesture.

That display had Jamaicans all over spitting fire for what many considered not just over-the-top celebrations but a ‘diss’ of sprint legend Usain Bolt, ‘the greatest sprinter of all times’, ‘the global face of athletics’ and the man many have come to see as ‘the saving grace of a sport tainted by drug usage’. Weir is not just Bolt’s team-mate but a member of the RACERS Track Club and a training partner of the sprint icon. The 2012 Olympic Bronze and 2013 World Championship Silver medalist was quick to defend Bolt taking to social media to lambaste Bailey.

The following comments have been attributed to Weir in his scathing response to the American:

“When you see the greats, you have to show them respect, you have to respect the legends of our sport. Especially when you are a little nobody, you really are to show more respect to those who are leading the way and those who have accomplished way more than you have…….He disrespected track and field. He also said that Bolt is ‘somewhat of an icon’, he is an icon and he was not showing enough respect, not just to Bolt, but to the sport. As an athlete, I feel like he was disrespecting me and as a member of this Jamaican team, I also felt upset and disrespected about it……This is just the beginning.”

Another Jamaican athlete, National Long Jump record Holder Sheree Francis also voiced her disapproval of the gesture by the American in a post on social media site Facebook. “That Ryan or whatever his name is guy doing the most by throwing out cut throats at Bolt, as if he did anything. I mean he got the baton ahead of Bolt.”

Perhaps this is what track and field needs…..maybe this is what Usain Bolt needs….someone to stir the competitive fire in his bones. Gatlin, seen by many as his only serious rival threw down the gauntlet in 2014 to a largely inactive Bolt, going through the season undefeated and looking very ominous so far in 2015.

It was Gatlin’s demolition job on the backstretch which eventually led to Bailey gaining an unassailable lead. Bolt, while he respects his rivals and accepts that one will have occasional bad days, hates to lose. He does not have anything to prove but will get his chance to further underline his legendary status as the season unfolds.

Ryan Bailey has nowhere near the track record of Gatlin and may be a ‘nobody’ in the sport but that gesture may have awakened Lightening Bolt, enough for the world to see the brilliance of a man that has captivated track and field fans for much of the last decade.

Jamaica has a reputation for welcoming visitors and making them feel at home. One hopes that the competitive fire in Bailey will see him showing up and that he will receive the usual display of hospitality. That is one more reason to attend the Jamaica International Invitational World Challenge Meet or to follow available live streaming links.