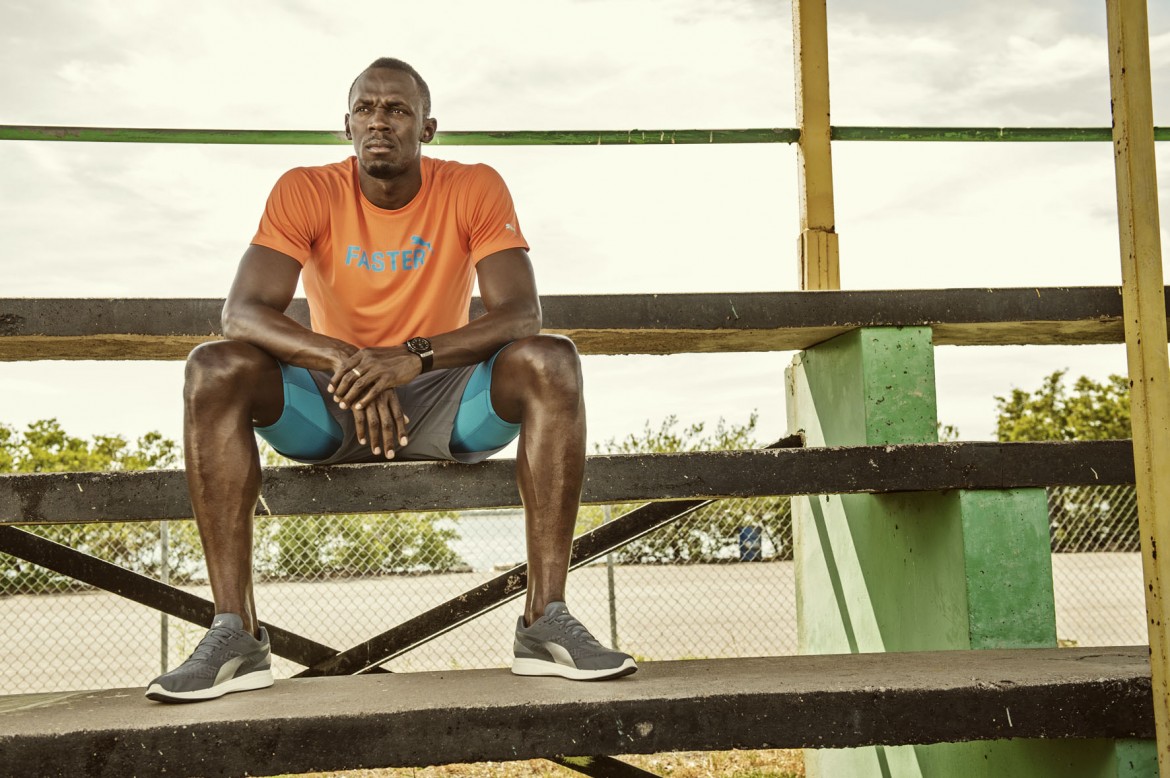 Ahead of August’s World Championships, Usain Bolt, the world’s fastest man, shows no signs of slowing down. He talks exclusively to Kerry McCarthy about staying off the rum, securing his legacy and the one issue he can’t stay laid-back about…

You’re 29 this year and you’ve been at the top a long time. Do you feel your age, and have you had to adapt?

Thanks for reminding me I’m getting old! But I’ll have you know that every three months I visit a doctor in Germany for a full body MOT and I’ve not failed one yet. I’m finding the training harder because my coach is pushing me more than ever. Normally we break in slowly at the start of the season and build up, but this year coach has started me off doing more reps than before, each one faster and with less rest in-between. He wants to shock my body into adapting quicker now that it’s a bit older. I have scoliosis [curvature of the spine] so I also have to make sure I do all my core strength work.

How did you cope with an injury-ravaged  2014, when you raced only twice?

I was lucky it happened in a relative down year. I’d have been more stressed if it had been an Olympic or World Champs year. I missed competing, but I just kept telling myself it would be a mistake to come back too early and that I should use the time to make myself stronger than ever. It helped that people were saying I was finished. It made me want to do my rehab properly so when I came back I could show everyone I’m still here and I’m still the best.

How can you ward off injury in future?

Me and my coach had a difference of opinion about this and, unsurprisingly, he won. I thought I needed to be gentle with myself and peak at the right time for important races, but he felt, as I’m getting older, that’s more risky, and that I should be in shape all the time.

How’s the diet these days?

I haven’t had KFC for about four months, which is killing me. I’ve tried to bribe my chef but not only is he not bribe-able, he chases me round the house and makes sure I eat what he’s cooked. He also lays out my vitamin pills and supplements in front of me so I can’t ‘forget’ to take them. I eat a lot more vegetables – and I hate them all. I used to eat them occasionally, but now with every meal I have a plate just for veg. But I can’t get away any more with just winging it. To perform how I want I have to be perfect in training – and eating right is a part of training – so down it goes. I’ve backed off hard liquor, too – rum and stuff – but I still drink Guinness, or a Heineken or two. A guy’s got to have something, right?

Are you still living in a lad-pad with  your best friend, NJ?

Not any more. I’m close to having a girlfriend now, so I live responsibly by myself in Kingston.

How do your family handle your  now-insane levels of fame?

Most of the time it doesn’t occur to them. The only time it hits home is if we’re out and people come running up to me in the street. That didn’t used to happen, but now even in Kingston I get that. But mostly when we’re together we have the same family dynamic. I’m not Usain Bolt, superstar; but Usain Bolt, their little boy. I go home and lie with my head in Mum’s lap, they send me to shop for groceries, things like that. Last time I was home my Mum clipped my toenails for me! You’re never too old or famous for that.