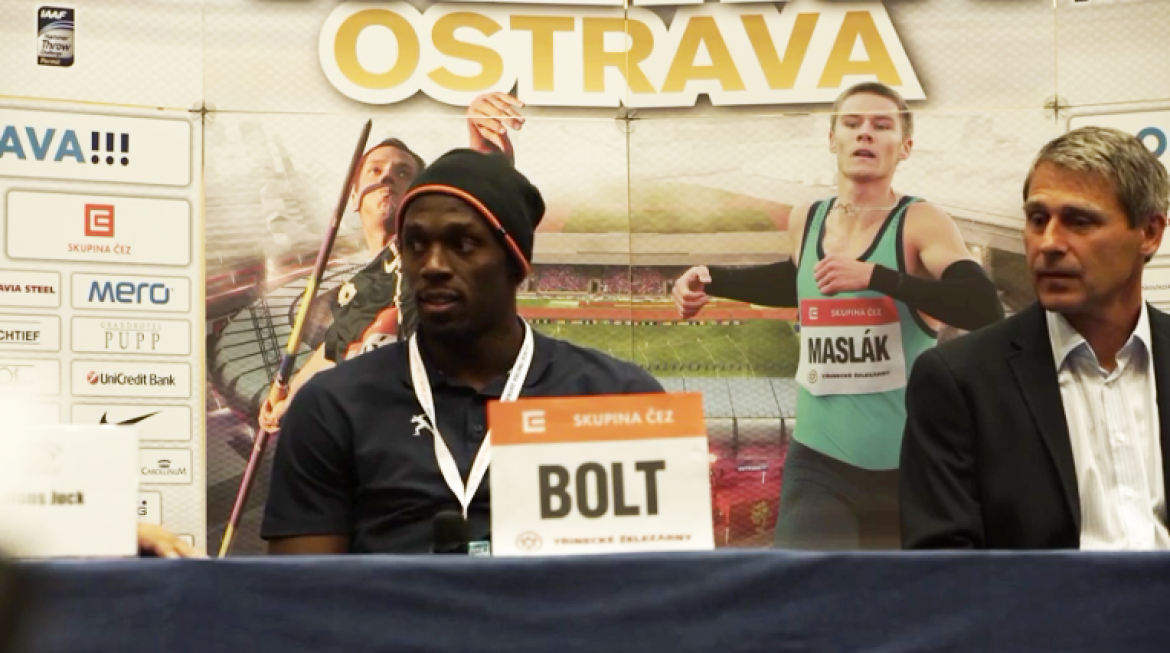 Triple World Record Holder Usain Bolt makes his much anticipated European seasonal debut in familiar territory at a meet he has dominated each time he graced the track. The Jamaican speedster has been the subject of much speculation especially with the exploits of Justin Gatlin, the man seen by many as his only serious threat to another IAAF World Championships sprint double and as such the Golden Spike World Challenge Meet in Ostrava, Czech Republic has garnered even more attention.

The newly refurbished Mestsky Stadium is expected to be filled to its 15,000 capacity as fans in Ostrava welcome the sprint icon who will be gunning for another win in his 7th appearance. Bolt has never lost an event at the meet and holds the meet records for the 200m (19.83) and the seldom raced 300m (30.97).

The multiple Olympic and World Championship Gold medalist was in his usual confident and accommodating mood at a press conference on Sunday where he indicated that he was in very good shape and on course for a successful defense of the titles he won at the 2013 IAAF World Championship. He was also at his typically ‘diplomatic’ best in responding to the following question regarding Gatlin’s 9.74 Doha world lead:

I don’t think I need to make any comment to it. Most of the people reacted
the same way.

Bolt also made it clear that the 200m will be his focus leading to the championships in August. The Jamaican who has a season best time of 20.20 done at the UTech Classic in Kingston in April is not expected to be seriously tested and should win on a canter. Many are anticipating that if conditions are favourable, the lanky sprinter might go all out to eclipse his own meeting record. American Isiah Young, Kenyan Carvin Nkanata (the fastest season best in the field at 20.14) and Pako Seribe of Botswana should battle for the minor placings.

While Bolt is expected to be the star attraction, another Jamaican, former world record holder Asafa Powell is expected to grab his share of the spotlight when he contests the 100m. The self-styled ‘Sub10 King’ (84 and counting) has been in brilliant form this season and is currently ranked number two following his sensational 9.84 run at the Jamaica International
Invitational IAAF World Challenge Meet in Kingston in early May.

The two time World Championship Bronze medalists holds the meeting record of 9.83 which he set back in 2010. Richard Kilty of Great Britain, Americans Charles Simon and Isiah Young as well as Mosito Lehata of Lesotho will be doing their best to ensure Powell does not have things his own way.

Veteran campaigners Sherone Simpson and Kerron Stewart are expected to occupy podium positions when the contest the Women’s 200m. Simpson with a season’s best 22.64 is coming off a very disappointing showing at the Ponce Meet in Puerto Rico where she finished way down the track in the 100m.

Stewart has not looked her usual sharp self this season and will be looking to comfortably surpass her season’s best time of 23.33 as she tries to round herself into competitive shape ahead of what is expected to a hotly contested Jamaican National Senior Championship in just over a month. Bianca Williams of Great Britain will be looking to upstage the Jamaicans.

The only other Jamaican scheduled to perform at the meet is quarter-miler Edino Steele who will contest the 300m. Christian Taylor fresh off his recent 18.02m personal best will be the star attraction in the Triple Jump while Bohdan Bondarenko will carry most interest in the High Jump.

Another interesting event on the card will be the 400m Hurdles for women which will see local girl 2013 World Champion Zuzana Hejnova facing a very strong field including world leader Wenda Nel of South Africa, Eilidh Child of Great Britain, Kori carter of the USA and compatriot Denisa Rosolova.